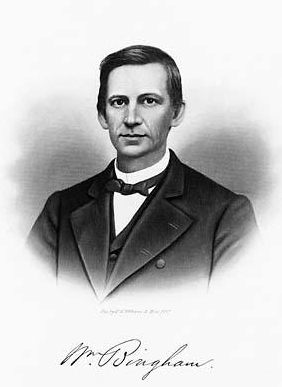 William Bingham, author and educator, was born in Hillsborough, the fourth child and eldest son of William James Bingham, headmaster of Hillsborough Academy, and his wife, Eliza Alves Norwood. Named for his paternal grandfather, who was a schoolmaster and professor at The University of North Carolina, he was also, on his mother's side, a great-grandson of James Hogg (1729–1805), a Hillsborough merchant.

At the age of ten, Bingham moved with his family to Oaks, a rural community twelve miles southwest of Hillsborough. Completing the course of study at his father's school at fourteen, he remained at home and worked at the family farm until 1853, when he entered The University of North Carolina. Graduating with first honors in 1856, he chose as the topic of his commencement address "The People and Their Common Schools." Soon afterward, his father employed him as a teacher. In January 1857 he was made a full partner in the school, under the firm name W. J. Bingham and Sons. Later that year, with his younger brother, Robert, he toured several private schools in Virginia to observe their teaching methods.

Bingham remained with the school for the rest of his life, initially concentrating upon the preparation of more advanced pupils for college. His father's failing health, and after 1861, his brother's absence with the Army of Northern Virginia made him the dominant figure in the school's management. Late in 1863 he officially became headmaster. A year later, in December 1864, he succeeded in obtaining a special, thirty-year charter for the school from the General Assembly. Under its provisions, its pupils would be exempt from conscription until the age of eighteen but would receive military training, live under military discipline, and be liable for mobilization as a separate unit in case of local emergency. Bingham himself, as headmaster, became an ex officio colonel in the state militia, and his instructors were likewise granted militia commissions. By this charter, the school's curriculum was militarized for the first time, and, also for the first time, the school officially became "The Bingham School." That same month, Bingham moved the school from Oaks to Mebane, a railroad junction in eastern Alamance County, to give it better access to transport; and he reopened its boarding program, which his father, with a few exceptions, had allowed to lapse after leaving Hillsborough in 1845. 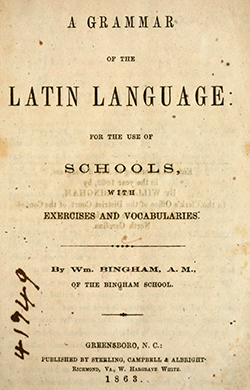 With the aid of his brother-in-law, Stuart White, and a cousin, William B. Lynch, whom he had accepted as partners in 1864, Bingham kept the school open throughout the Civil War, except for a brief period during Stoneman's Raid, when the student body was called to active duty. At the same time, by virtue of his militia rank, he exercised various military police functions for the state government throughout portions of Orange and Alamance counties. In 1865 he bought out White and Lynch's interests and resumed his position as headmaster and sole proprietor of the school.

Meanwhile, Bingham met with success in another quarter. During the war, he had written and published under Confederate imprint a Latin grammar (1863) and an edited translation of Caesar's Commentaries (1864). By the late 1870s, both were being used as textbooks in almost every state in the Union, and both remained in print for over twenty-five years. Bingham also produced an English grammar (1867) and a series of Latin readers; at the time of his death, he was preparing a textbook on Latin prose composition.

In early 1873, Bingham suffered an apparent physical collapse, attributed by contemporaries to strain and overwork. By 1 Feb. he was well enough to accompany his brother to Raleigh as a member of a delegation of fifty-five dignitaries petitioning the state senate to reopen the university. Three weeks later, however, he died in Gainesville, Fla., where he had traveled for his health, and was buried in the Mebane City Cemetery.

Bingham served as a Presbyterian elder for much of his adult life. Celebrated for an extraordinary speaking ability, he was also an accomplished pianist and organist and was highly regarded as an occasional poet. In December 1856 he married Owen White, the sister of a college friend. The couple had six children: William James (28 Nov. 1857–24 Jan. 1888), Ernest, Walter Lenoir (1863–86), Norwood, Herbert (1873–97), and Mary Stuart, who married Preston Lewis Grey, of Bristol, Va.