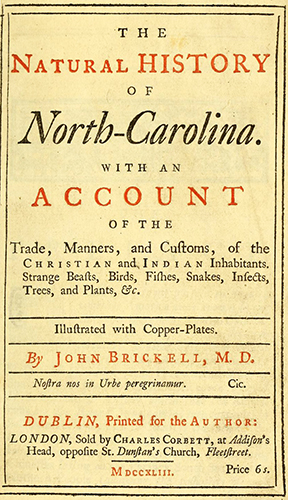 John Brickell, early eighteenth-century naturalist and physician, was a native of Ireland. Virtually nothing is known of him before his appearance in North Carolina in 1729. His Natural History of North Carolina, published in Dublin in 1737 following his return from America, indicates that he was familiar with the coastal towns of Bath, Beaufort, and Edenton. This work, heavily plagiarized from John Lawson's A New Voyage to Carolina (1709), can be used for biographical information on Brickell only with great circumspection. Brickell also drew heavily on letters from the Reverend John Clayton to the Royal Society of London, 1693–94.

North Carolina records show that Brickell practiced medicine at Edenton during the winter of 1730–31 and that he was, during that time, physician to the family of Governor Sir Richard Everard. His name does not appear in North Carolina sources after July 1731, about which time he presumably returned to Ireland.

Brickell's Natural History reveals the mind and workmanship of a man of grammar school education at best. He was evidently unfamiliar with such great medical authorities of the age as Sydenham and Boerhaave, as he settled most issues by reference to Pliny the Elder. Irish subscribers to the book included, among medical men, mostly apothecaries and chirurgeons (surgeons), an indication that his contacts were mostly with the lower stratum of the profession. His observations in the area of folk-practices and remedies are not without value, however, and serve as an interesting complement to the more nearly scientific gleanings of Lawson. Brickell showed no discrimination whatever in recording the Carolina medical folkways, a fact which, however much it may please the folklorist, was a disservice to the medical practice of his day: shrewd uses of local herbs by the colonists received no greater emphasis in Brickell's notebook than did the practice of applying the anus of a hen to a snakebite.

Brickell is known to have published another work in London in 1739, entitled Catalogue of American Tree and Plants which will Bear the Climate of England. It appears that he may have gone from Ireland to England and that he took with him from America a collection of seeds and plants, some of which he grew successfully. Of his later life and career, nothing is presently known.

Something must be said of the tissue of misconceptions that has attached itself to Brickell's name in various historical writings. A legend that he received any part of his education at Edinburgh University, then the leading medical school in the world, is without foundation in the school's alumni records. Another legend—that he was a brother of a colonial Bertie County Anglican priest, Matthias Brickell—is substantiated by no known record in North Carolina or in Great Britain. Indeed, the existence of such a person as Matthias Brickell is itself much in doubt. Finally, it is purely speculative to associate Brickell's name with that of a late eighteenth-century Georgia physician also named John Brickell and sometimes alleged to have been the son of the author of the Natural History of North Carolina.

Title page of The Natural History of North-Carolina. Brickell, John. The Natural History of North-Carolina, With an Account of the Trade, Manners, and Customs, of the Christian and Indian Inhabitants, Strange Beasts, Birds, Fishes, Snakes, Insects, Trees, and Plants, &c. Dublin. 1743. https://archive.org/stream/naturalhistoryof02bric#page/n3/mode/2up (accessed July 19, 2013).

There was a Matthias Brickell

There was a Matthias Brickell, Jr. as a representative of Hertford County in the Fourth North Carolina Provincial Congress, according to the minutes: