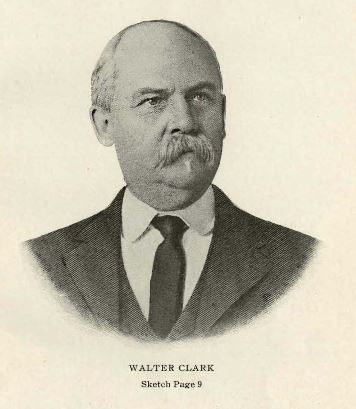 Walter McKenzie Clark, chief justice of the supreme court, was born at Prospect Hill plantation in Halifax County. His father was David Clark II, a wealthy planter and a brigadier general in the North Carolina militia during the Civil War. His mother was Anna Maria Thorne of Halifax County. Walter Clark spent most of his boyhod at Ventosa, his father's plantation on the Roanoke River. At eight years of age Clark went to Vine Hill Academy near Clarksville. In 1857 he attended Ridgeway School under the supervision of Professor William K. Bass, and in 1859 he studied with Professor Ralph H. Graves at Belmont School in Granville County. Clark entered Colonel C. C. Tew's Military Academy in Hillsborough in August 1860.

In May of 1861 Clark was selected to drill the state's first group of recruits for the Civil War. He went with the Twenty-second North Carolina Regiment when it was sent to Virginia later that year. He joined Colonel Matt W. Ransom's Thirty-fifth North Carolina Regiment in August 1862 and served as adjutant and first lieutenant. Clark witnessed the Second Battle of Manassas and participated in the capture of Harper's Ferry and the battles of Sharpsburg and Fredricksburg. When his regiment returned to North Carolina in February 1863, Clark resigned his commission and continued his education at The University of North Carolina. He studied with President David L. Swain and Professor William H. Battle and graduated first in his class in June 1864. The day after commencement Clark was elected major of the Sixth Battalion, North Carolina Junior Reserves; he fought the next year within the state and became lieutenant colonel of the Seventieth Regiment.

After the war Clark managed the family's plantation because his father was in poor health and he also supervised the Riverside plantation near New Bern, which his father had given him. In the late 1860s Clark supported industrialization for the South, advocated the importation of free white labor, and urged Southerners to get to work and forget the Lost Cause. He studied law on Wall Street in New York and at Columbian Law School in Washington, D.C., in 1866. In 1867 he received his license to practice law in Halifax County and opened his law office in Scotland Neck. The next year he was licensed to practice law before the supreme court. The University of North Carolina awarded the increasingly prosperous and prominent lawyer a M.A. in 1867. During the summer of 1871 Clark travelled widely in the American West. He lived briefly in Halifax in 1872 before moving to Raleigh in 1873. In the capital Clark practiced law, managed the Raleigh News, and served as a director and general counsel for the Raleigh and Gaston and the Raleigh and Augusta railroads. When he moved to Raleigh, Clark joined the Methodist church. His father and most of the Clark family were Episcopalians, but his mother had joined the Methodist church shortly before her marriage. As an active Methodist, Clark wrote about the church's history, spoke at Trinity College in 1880 on the philosophy of religion, and attended many church meetings. In 1881 he represented the Southern Methodist Episcopal Church at the Ecumenical Conference of Methodism at London. At that time he travelled extensively in Europe. He was a delegate to the church's General Conference at St. Louis in 1890 and at Memphis in 1894.

In April 1885, Governor Alfred M. Scales appointed Clark a judge of the superior courts; he was elected to the post in November 1886. Three years later Governor Daniel G. Fowle named Clark an associate justice of the supreme court. The following year Clark won election to the unexpired term. In 1894 he was nominated by the Democratic party and endorsed by both the Populist and Republican parties for a full term on the supreme court. He won unanimously. In 1896 he refused the Democratic nomination for governor and chose to remain on the bench. In the same year, Clark, a supporter of free silver, received fifty votes for vice-president at the Democratic national convention. 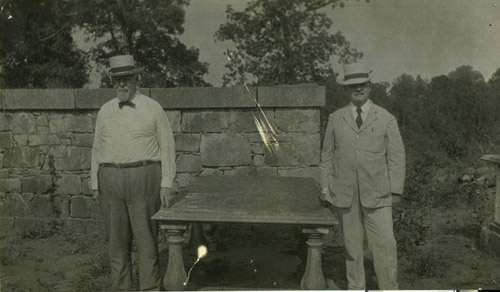 For several years around the turn of the century, Clark was embroiled in many controversies. He attacked the American Tobacco Company for violating the Sherman antitrust law and argued that it unfairly destroyed competitors and mistreated farmers. He exposed the evils of the state's powerful railroads, the Southern, the Atlantic Coast Line, and the Seaboard. Clark charged that they issued illegal passes, set exorbitant rates, received unfair tax valuations, lobbied in the legislature, and interfered in state politics. In dissenting opinions, speeches, articles, and letters, Clark criticized the control over government exercised by banks, trusts, and railroads. In addition, he advocated many social reforms: postal savings banks, one-cent letter postage, popular election of senators, election of postmasters, an income tax, and woman suffrage. A. L. Brooks and Hugh T. Lefler called Clark "probably the most outspoken man in North Carolina or the South in advocating economic and social reforms." Clark also enthusiastically supported the Spanish-American war.

In 1897–98 Clark, a member of Trinity College's board of trustees since 1889, clashed with President John C. Kilgo of Trinity. Part of the controversy resulted from Clark's opposition to Kilgo's proposal to elect faculty members for four-year terms. A larger issue involved Kilgo's close relationship with the Dukes and the tobacco trust, which Clark strongly opposed. The two men also differed regarding state aid to higher education, because Kilgo joined the forces opposing state aid to The University of North Carolina while Clark supported The University of North Carolina. In the end Kilgo won the battle and Clark resigned from the board of trustees.

In 1902 Walter Clark sought the Democratic nomination for chief justice of the supreme court. The railroads, the American Tobacco Company, and most of the state's newspapers opposed Clark's candidacy. His strongest supporter was Josephus Daniels and the Raleigh News and Observer. After a bitter fight and a stirring nominating speech by Claude Kitchin, Clark won the Democratic convention's nomination. He was elected and later reelected to two additional terms. Clark served on the supreme court for thirty-five years and wrote 3,235 opinions. He made the court work efficiently, orderly, and promptly and was prominent in advocating the construction of a new building for the court. 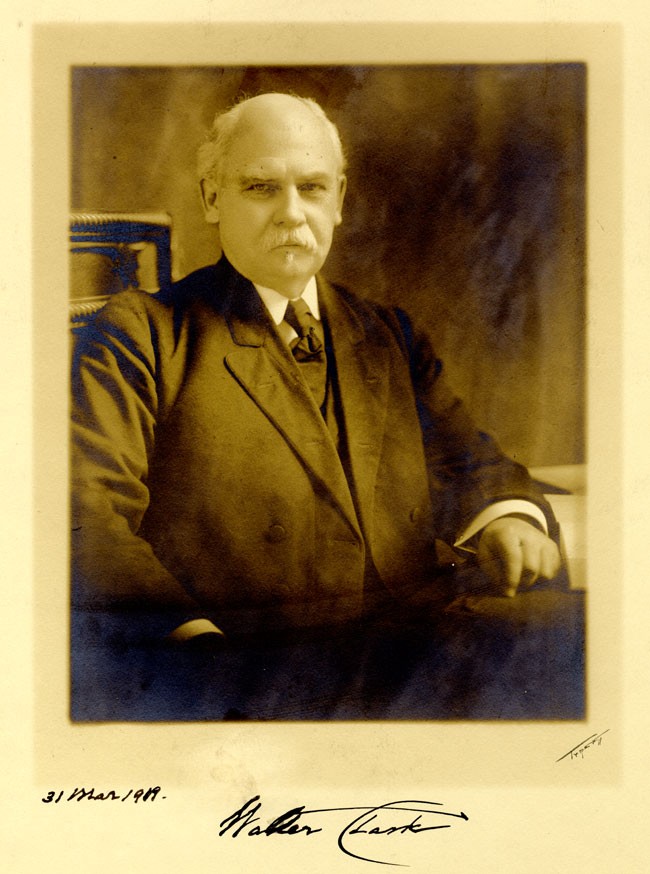 In 1912 Clark fought three of the state's most powerful figures for the Democratic nomination for the U.S. Senate: Governor W. W. Kitchin, former governor Charles B. Aycock, and incumbent Senator Furnifold M. Simmons. Candidate Clark advocated destruction of the trusts, popular election of senators and federal judges, a tariff for revenue only, initiative, referendum, recall (except for judges), child labor laws, more public schools, extension of good roads, and the operation of telephone and telegraph by the post office department. After the death of Aycock, Simmons aimed his campaign against Clark because Kitchin posed little threat. Simmons won easily and Clark received only about ten percent of the vote.

After his defeat, Clark continued to battle for "socialized democracy" in his many opinions, articles, addresses, and letters. He was a forceful supporter of woman's suffrage and served as legal adviser to the North Carolina League of Women Voters. He defended labor's right to organize and favored workmen's compensation laws and the eight hour day. He called for the abolition of the poll tax and an end to lynchings. Clark approved municipal ownership of utilities and advocated nationalization of coal mines, oil reserves, and water power sites.

Appointed by President Wilson, Clark served as an umpire for the National War Labor Board in 1917–18. Clark was president of the North Carolina State Literary and Historical Association in 1902. For many years he was chairman of the judiciary committee of the North Carolina Grand Lodge of Masons. Clark led the efforts to have the two dates, 20 May 1775 and 12 Apr. 1776, placed on the state flag and to have the state adopt as its motto, Esse Quam Videri.

Clark was married on 27 Jan. 1875 to Susan Washington Graham, daughter of William A. Graham, governor of North Carolina, U.S. Senator, and secretary of the navy. Their children were Susan, David, John Washington, Graham McKenzie, Walter, Thorne McKenzie, and Eugenia. Clark was buried in Raleigh. His portrait hangs in the Supreme Court Building and his papers are in the state archives.

Although Clark eventually advocated for abandonment of the South's pursuit of the "Lost Cause" of the Confederacy, his Regimental Histories The Regimental Histories were crafted within the framework of the Lost Cause interpretation of the American Civil War. Completed for the benefit of the State of North Carolina in 1901-1905 after white supremacists had seized control of the government, these volumes embodied the concepts of “valor” and “duty to cause” that set both the boundaries of interpretation and the grounds for reunification with northern soldiers. The main concept in this was North Carolina’s “Rebel Boast” – a summation of the Tarheel soldier’s service to duty: First at Bethel, Farthest to the Front at Gettysburg and Chickamauga, Last at Appomattox. Not only were these claims of martial prowess emblazoned on the cover of each volume but Clark also admonished his readers that these were not boasts but merely “sober historic truth(s)” that told the story of “North Carolina’s fidelity to duty.” This uncoupling of battle actions from the root cause of the war, slavery, served the white supremacist narrative. Clark strove to shift the chronicle away from the cause of Southern Independence (claiming it “had passed forever from among men” and that “no advocate remained”) to the valor, service, and duty rendered by North Carolina’s Confederate soldiers. Along with similar writings by other contemporary historians, this interpretive construct survived without challenge for much of the 20th Century. For an additional biography of Clark, visit: https://www.ncpedia.org/biography/clark-walter-oah

Ballots for Both. An Address by Chief Justice Walter Clark at Greenville, N.C., 8 December, 1916 Documenting the American South, UNC Libraries

History of the Raleigh & Gaston Railroad Company, Including All the Acts of the General Assembly of North Carolina Relating Thereto Documenting the American South, UNC Libraries

The Negro in North Carolina and the South. His Fifty-five Years of Freedom and What He Has Done. Commencement Address at St. Augustine's School, Raleigh, N. C., May 26, 1920, by Chief Justice Walter Clark, of North Carolina Documenting the American South, UNC Libraries

Relating to Right of Women in North Carolina to be Notaries Public. "The Right of Women to Make a Living." Dissenting Opinion of Chief Justice Walter Clark in Beckett [sic] V. Knight Documenting the American South, UNC Libraries

Guilford Battleground Co. A memorial volume of the Guilford Battle Ground Company. Organized May 6, 1887, at Greensboro, N.C. It contains a brief history of the battle of Guilford Court House, an account of the organization and progress of the Guildford Battle Ground Company, biographical sketches, and a full account of the Holt monument and its dedication, July the 4th, 1893. Greensboro, N.C., Reece & Elam, printers. 1893. https://archive.org/details/memorialvolumeof00guil (accessed June 4, 2013).

Photo of tomb of William R. Davie with William A. Graham and Walter Clark standing on either side. "Photograph, Accession #: H.1923.12.1." 1923. North Carolina Museum of History.