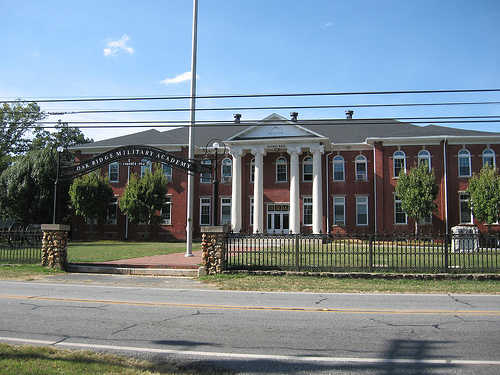 The bill to designate Oak Ridge Military Academy as the official State Military Academy was sponsored by several congressmen, including senator Bob Shaw of Guilford County. Though Oak Ridge is the only military academy in the state, Shaw believed it should receive the honor due to its service in training thousands of leaders from all over the country and world. The school’s president at the time, Robert R. Rossi, claimed the fact that Oak Ridge was the only military academy left after all others failed was precisely why it deserved the recognition.

Oak Ridge is the third oldest military high school in the country, and was the first military boarding school to admit girls.

The School was founded in 1852 as the Oak Ridge Male Institute as a two-year boarding school for men. By 1854 it had changed its name to the Oak Ridge Institute, admitting female students as well. The school remained co-educational until 1929. Oak Ridge was closed for several years during the Civil War, as most eligible students were either enlisted or conscripted into the Confederate Army. The school faced closure in 1914 when a fire destroyed the main schoolhouse and chapel, but was rebuilt and continued on. In 1917 the school became military under the supervision under the war department, and trained boys who went on to serve in WWI. In 1926 the school became a designated Junior Reserve Officer Training Corp unit.

In 1929 the name was officially changed to the Oak Ridge Military Institute, and was limited to males only. Oak Ridge founded an additional two-year junior college in 1932 which operated until 1966. In 1971 the school became co-educational once more and changed its name to the Oak Ridge Academy. The final name change occurred in 1981 when the school became the Oak Ridge Military Academy again. Both boys and girls were uniformed at this time. By 1991, at the time of state symbol adoption, the school had just under 200 cadets in grades 7-12. The late 2000’s brought declining numbers, however, as the school enrollment dropped from 200 to just 45. The school faced closure in 2008-2009, but a renewed focus on the recruitment of international students and an emphasis on the school’s College preparatory academic program has recently revitalized the school. As of 2014, enrollment was at 80 students.

i love it i want to go there

i love it i want to go there one day

This was way too short...

This was way too short...

No help what so ever

No help what so ever

yall are the best

yall are the best