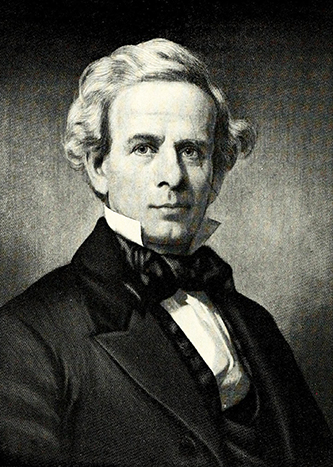 Edward Jones Hale, editor and publisher, was born in Chatham County, the son and youngest child of Joseph and Dorothy Herndon Hale. An orphan before he was ten, he became the ward of his namesake, Colonel Edward Jones. The young lad was apprenticed to Joseph Gales of the Raleigh Register, and he completed his journalistic training in the office of Gales and Seaton's National Intelligencer in Washington, D.C. Returning to Fayetteville in January 1825, Hale purchased the Carolina Observer, which had changed hands a number of times since its establishment in 1817 by Francis W. Waldo. On his way to amassing a considerable fortune in printing from the successful office of his renamed Fayetteville Observer, Hale enlarged his connections with the elite of the state by marrying the prominent socialite, Sarah Jane Walker of the Mallett and Walker families, on 24 May 1828.

Although his archenemy W. W. Holden said Hale exhibited good sense by never running for political office, he was a powerful force in politics. It was said that "the editorial and personal enmity of the two men had considerable influence on the history of the state." By 1850, the Observer had the greatest circulation of any newspaper in North Carolina, and Hale had gained a national reputation as a first-rate editor. In 1857 he refused a bid to manage A. S. Barnes and Company, and in 1858 he turned down a munificent offer to be chief editor of the New York World. Before the Civil War he brought his sons, Edward Jones, Peter Mallett, and Edward Joseph, into his shop as partners.

During the year he spent with the Intelligencer, Hale met John C. Calhoun, Daniel Webster, and, even more importantly, Henry Clay. Hale became the friend as well as the political supporter of "the Great Commoner." In 1834 he joined with George E. Badger, Edward B. Dudley, and Willie P. Mangum to organize the Whig party in North Carolina. He supported the Whigs until 18 Apr. 1861, when he renounced Lincoln's proclamation asking for troops, an action that he believed altered affairs beyond the control of either those with peaceful intentions or those dedicated to the Union. In the presidential election of 1860, Hale joined Badger and William A. Graham to endorse John Bell, and he played a vital role in the election of Zebulon B. Vance, exacerbating the conflict with Holden which reached a climax in 1864.

In 1865, General William T. Sherman ordered the destruction of the Observer, one of the preeminent Confederate newspapers. Hale had already moved its files to the home of Colonel Thomas Hill in Chatham County. Finally in the fall of 1866, Hall and his sons moved to New York City where at first they engaged in job printing, but in 1867 they released their first book, R. L. Dabney's Defence of Virginia and the South. The Hale firm specialized in printing Southern authors for the Southern market; its leading title was Alexander H. Stephen's History of the United States. By 1875 E. J. Hale and Sons, which had its offices on Murray Street and later at 55 Chambers Street, had 124 titles in its catalogue, and by 1883 had released over 500 titles.

Hale was an Episcopalian, and, like many prominent North Carolinians, he was a trustee of The University of North Carolina. He died at age eighty in New York City and was buried in Brooklyn's Greenwood Cemetery. A portrait in oil by James Bogle painted in 1855 was reproduced in Ashe's biographical sketch and in the Fayetteville Observer, 17 Sept. 1967.

Hale did not have three sons.

Hale did not have three sons. His sons were Peter Mallett Hale and Edward Joseph Hale. Peter, the elder, worked with his father at the publishing company in New York for a number of years before returning to Raleigh to found the Observer and Hale's Weekly. Edward in 1883 re-established the Fayetteville Observer. Edward was often referred to as "E. J. Hale, Jr.," but his middle name was not the same as his father's.