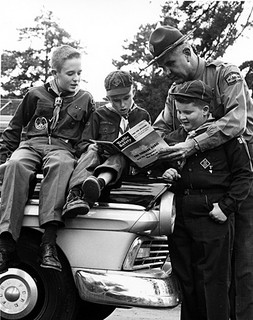 The scouting movement, incorporating personal integrity, preparedness, and philanthropic ideals, was founded in 1907 by retired British army officer Lord Robert Baden-Powell following his founding of an experimental camp on Brownsea Island off the southern coast of England. The first scout troops in the United States were organized before the establishment of a national office; they were informal programs modeled on Baden-Powell's handbook. The Boy Scouts of America (BSA) was incorporated on 8 Feb. 1910 by William D. Boyce, a Chicago publisher who had been in London the previous year and was impressed with the group.

Scouting in North Carolina began in 1910 in Greensboro, with the founding of what seems to be the state's first scout troop. The Greensboro Area Council of the BSA was formed in 1918. Scouting increased greatly in the state after Boyce established a separate organization, the Lone Scouts, which offered a scouting program to boys in rural areas. The Lone Scout program became a part of the BSA in 1924. The program thrived in rural North Carolina. A Lone Scout Museum at the John J. Barnhardt Scout Camp near New London in Stanly County preserves mementos of the program. 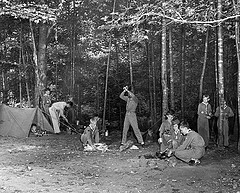 l in 1923. In 1928 the Winston-Salem Council assumed oversight of scout troops in six other counties, and to reflect the larger geographical jurisdiction the council name was changed to Old Hickory in 1941. The following year Stokes County transferred from the Cherokee Council, headquartered at the time in Reidsville. Like many of the first council camps, the 43-acre camp in Forsyth County could not meet the expanding program needs of the growing council, and in 1953-54 land was purchased in Surry County. The first summer camp was held at the council's new camp, Raven Knob, in the summer of 1954. Currently, the Old Hickory Council serves Forsyth, Stokes, Yadkin, Surry, Wilkes, Alleghany, Ashe, and Watauga Counties.

Each North Carolina council operates one or more year-round camping facilities that offer a resident summer camp program and are available for unit activities throughout the year. Councils are subdivided into districts. Each district is served by a professional staff member who works through a volunteer district committee to provide organizational training and program support for individual cub scout packs, scout troops, explorer posts, and varsity scout teams.

During scouting's early years, segregation was the law in the southern states. Most North Carolina councils had a single black district, which served all African American scout units in that council and operated separate camps for them. Because these districts covered a wide area, and because the camps lacked the resources available at the white camps, there never was a proportionate number of African American scouts in the segregated South. Nevertheless, committed volunteers and professionals made possible outstanding scouting programs in a few of North Carolina's black communities. One of the earliest African American troops in the South was organized in 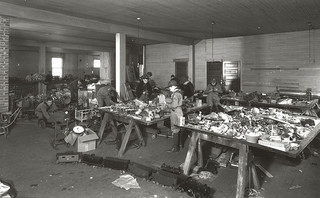 Cub scouting became an official part of the BSA in 1930, although programs for younger boys modeled on BadenPowell's Wolf Cub's Handbook had operated for a decade without official sanction of the national office. The first Sea Scouting program for older boys began in 1911. Since then, the BSA has developed a number of programs for older youth, including Rover Scouts, Explorer Scouts, Air Explorers, Exploring, and Varsity Scouts. In 1969 girls became participants in explorer activities, and two years later they were registered as Explorers.

William Hillcourt, Baden-Powell: The Two Lives of a Hero (1964).

Development misspelled "Dvelopment" in caption for first photograph and on Flickr

Hi!  Thanks for visiting

Hi!  Thanks for visiting NCpedia and taking time to let us know.  I've made the corrections on this page.