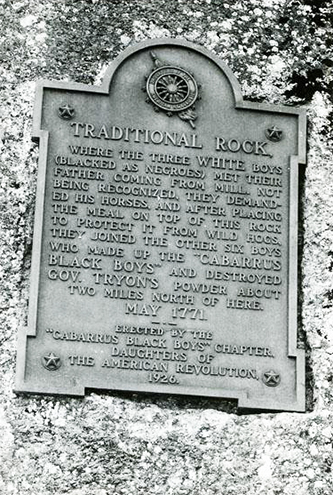 The Cabarrus Black Boys were nine young men from Rowan and Mecklenburg (later Cabarrus) Counties who took part in an infamous raid against a royal governmental military convoy during the Regulator Movement in North Carolina in the years before the American Revolution. On 9 May 1771 Gen. Hugh Waddell left Salisbury en route to Hillsborough to assist Governor William Tryon in quelling the Regulator uprising. After crossing the Yadkin River, Waddell's militia encountered a numerically superior body of Regulators and began to fall back to Salisbury. A small band of Regulators, disguised as Indians, attacked a convoy that was carrying gunpowder from South Carolina to Waddell. The group burned two powder wagons as well as destroyed some blankets, leggings, kettles, and other supplies.

The men involved in this episode were either blackened by their Indian disguises or by the powder as they emptied it from kegs, and the name "Black Boys of Cabarrus" was applied to them at a later time. By a proclamation of 11 June 1771, Tryon offered amnesty to certain categories of Regulators, but this did not apply to those who were involved in blowing up Waddell's gunpowder. James Ashmore, who lived near the site, swore under oath that the Cabarrus Black Boys, in addition to himself, were Robert Caruthers, Benjamin Cockran, Robert Davis, Joshua Hadley, James White Jr., John White Jr., William White, and another William White, identified as the "son of the Widow White."

I am a descendant of Joshua

I am a descendant of Joshua Hadley. He was one of my great grandfathers. I also read the Quaker documents and also, evidently, the one you read about them being cowards. As you were, I was greatly offended by that. I share the view that they were all pretty much heroes of the day! I am very, very proud to be a member of such a brave and honorable group.

I am also a descendant of

I am also a descendant of Joshua Hadley, via his daughter, Ann. Or at least that is family lore. I'd love to talk with you some time to flesh out the genealogical material that I've worked up on the family.

I am currently compiling a genealogy of our family, and I would really appreciate any assistance you could offer.

You can reach me at grierhpharmd@gmail.com.

I would love any information

I would love any information on the White Family. I believe I descend from John White. I have many John Whites in the family but could only got back to 1880's. After that to many John Hills to search through to find the correct link.

NCpedia doesn't have any additional genealogical information on John White.  If you're still looking for family history information, I'm including a link to the Genealogy resources page at the NC Government & Heritage Library --http://statelibrary.ncdcr.gov/ghl/resources/genealogy.html.  Please visit this page for information and tips on conducting family history research.

The Government & Heritage Library is open Monday to Saturday and is open to public for researching North Carolina history and family history. You may also want to visit your local public library that may provide access to online genealogy databases.

I am a descendant of Robert

I am a descendant of Robert Carruthers (son of Hugh Carruthers and Sarah Purviance) who married a Margaret White. I believe that Robert (b. 1750) is one of the 'Black Boys' and that his wife Margaret (b. 1771) is the daughter of James White (b. 1747) according to info gathered on the internet.

It seems that this Margaret may have married a McClung rather that Robert Carruthers???

Can you help? Was the 'black boy' Robert Carruthers some other Carruthers?

Thank you for using NCpedia,

Thank you for using NCpedia, and for sending us your question. I have sent you and email to connect you with Reference Services at the State Library of North Carolina's Government & Heritage Library. They can help you with your inquiry.

I believe I am a direct

I believe I am a direct descendant of James Ashmore, he would be my 5th Great Grandfather, if this is the same James Ashmore that was married to Elizabeth Balch. Elizabeth had a brother named Hezekiah Balch who would later preach at Poplar, and eventually became a co-author and signor of the Mecklenburg Declaration of Independence. I there any information about what later became of James Ashmore?

Jarrod - my husband is

Jarrod - my husband is descendant of James Samuel Ashmore who married Elizabeth Balch. Please contact me for further info!

Jarrod, I am also a dependent

Jarrod, I am also a dependent of James Ashmore. My maternal grandfather was James Howard Ashmore. The Ashmore family moved to the Victoria area of Texas sometime after the Revolutionary War. Off hand I don't remember exact dates, but if you are interested, email me a kwyorman@bellsouth.net and I will send you what I have.