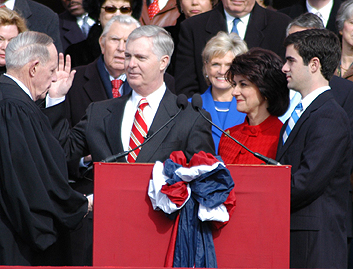 The first chief executive inaugurated in the twenty-first century and the first born after World War II, Michael Francis Easley (1950- ) guided the state as it transitioned from an agricultural and manufacturing economy to one based on innovation and high skill. As governor, he faced tough choices early in his first term as he coped with the effects of the recession of 2000 and worked to cut spending while increasing investments in education, proposing a state lottery to boost school construction. His goal as governor was to build “One North Carolina” where all citizens had access to educational opportunities needed in the new economy. Easley brought to the office a tested record of bringing parties to a consensus, an easy-going personality, and an independent approach to problem-solving.

Born on March 23, 1950, in Rocky Mount to Henry Alexander Easley, Jr. and his wife Huldah Marie, Michael Easley was raised on a sixty-acre Nash County tobacco farm. A Roman Catholic in an overwhelmingly Protestant region and state, Easley, the second of seven children, began his education in a parochial school before transferring to the public schools in the ninth grade. For two years he studied at Belmont Abbey College, completing his studies at the University of North Carolina at Chapel Hill, where he graduated in 1972. Four years later he graduated with honors from North Carolina Central University law school where he served as managing editor of the law review.

Out of law school Easley secured a post as an assistant prosecutor in the Thirteenth Judicial District comprising Brunswick, Columbus, and Bladen Counties. While working as a prosecutor, Easley met Mary Pipines, an assistant prosecutor in neighboring New Hanover County. Easley and Pipines married in 1980 and had one child, Michael Jr., born in 1985. In 1982 Easley was elected district attorney for his circuit and soon earned a reputation as a fearless prosecutor, gained convictions against scores of drug dealers and over fifty corrupt public officials. His political stock rose and, in 1990, he sought the Democratic nomination for the U.S. Senate but was defeated in that bid by former Charlotte Mayor Harvey Gantt.

In 1992 North Carolina voters elected Easley to the first of two four-year terms as attorney general. In that capacity he maintained a high-profile public image as a consumer advocate, one who targeted fraudulent telemarketers and unscrupulous lenders. Easley established a Citizen’s Rights Division to combat hate crimes, child abuse, and elder abuse, and worked to remove the state’s prison cap to keep violent felons behind bars. Following on his successes in the Cape Fear region, he instituted a pilot program of special drug courts. Negotiating with other attorneys general, Easley helped craft a settlement with the tobacco industry, one that would gain the state $5 billion over the course of twenty-five years, the genesis of what would be the Golden LEAF Foundation.

In the 2000 elections Easley defeated Lieutenant Governor Dennis A. Wicker for the Democratic gubernatorial nomination and former Charlotte Mayor Richard Vinroot in the fall returns. In his campaign platform Easley, a centrist Democrat, kept the focus on education and health care. At his inauguration on January 6, 2001, the new governor emphasized shared values and spoke of “one State, one people, one family, bound by a common concern for each other.” In the weeks that followed, he instituted cuts and freezes to cope with a $2.5 billion state budget shortfall. The governor implemented tax reform by closing tax loopholes and called for a temporary half-cent tax increase to provide resources for education initiatives, such as “More at Four,” a program serving at-risk four year olds. Another education initiative aimed to take teacher pay above the national average. Environmental reforms and health care also marked the first term. The governor negotiated the Clean Smokestacks bill to cut the state’s coal-fired power plant emissions. His administration implemented N. C. Senior Care, prescription drug assistance program for the elderly. During his first term, Easley became the first governor in state history to issue a veto, a measure approved by voters in a 1996 referendum.

Easley sought a second term, defeating Republican Patrick Ballantine in November 2004 and setting a record for the most votes ever garnered by a statewide candidate. In his second inaugural address in January 2005, Easley committed the state to a course whereby knowledge, talent, and skill would allow North Carolinians to compete in a changing economy. “Opportunity must be afforded to all and responsibility required of all,” he concluded. In August 2005 Easley, long an advocate for a dedicated source of education funding, signed legislation to create the North Carolina Education Lottery, with proceeds to be allocated to construction for low-wealth schools, college scholarships, reduced class size, and the “More at Four” program.

During his two terms in office, Easley led North Carolina through its transition from manufacturing to a knowledge-based workforce and sought means for the state to become a successful competitor in the global economy. By investing in education, worker training, and infrastructure, Easley sought to provide citizens with the tools needed to attract successful new industries and to boost existing businesses.

Would you happen to know

Would you happen to know where Former Governor of NC Mike Easley is now and how to contact him?

Thank you for visiting NCpedia and especially for taking time to share your question.

Unfortunately, we do not have any additional information about what Mr. Easley is doing now or how to contact him.  You may want to do some web searching and also check some of the people finder/white pages sites.  I see that there is also a Wikipedia page about him that may provide some leads. https://en.wikipedia.org/wiki/Mike_Easley

I see from a web search that it appears that he had his license to practice law re-instated several years ago, so he may still be practicing law in North Carolina. That may also be another way to try to locate him.  An online article from the Winston-Salem journal indicates that as of 2013, he may have been practicing law in Raleigh with his son.  Here is the link:

I hope this helps! Please let me know if you have additional questions.