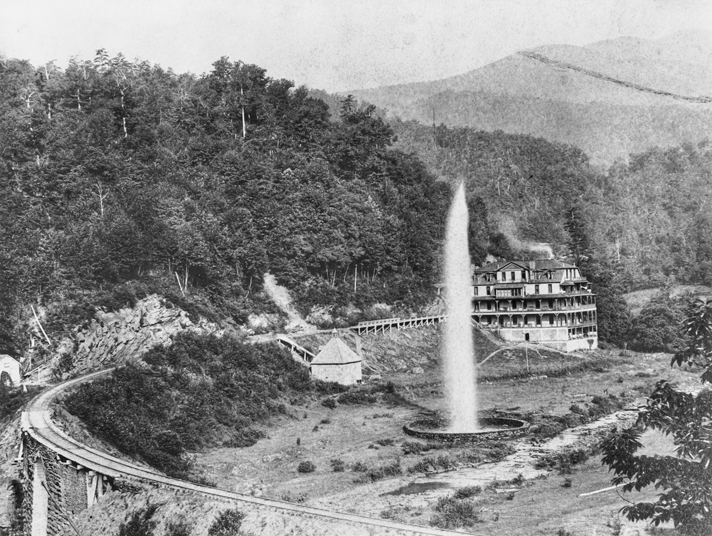 Andrews Geyser, a massive artificial fountain located near the town of Old Fort in McDowell County, was created as a dramatic tourist attraction during the early years of the Western North Carolina Railroad (WNCR). In 1855 the North Carolina legislature issued a charter to the WNCR to run from Salisbury to "some point on the French Broad River, beyond the Blue Ridge," and eventually farther west. Hoping to achieve commercial success as well as bring the state's mountain-dwelling citizens closer to the rest of North Carolina, the company reached Old Fort, at the foot of the mountains, in 1869. But the steep grades of the Eastern Continental Divide thwarted the builders and, unable to provide through service, the railroad soon foundered. In 1875 the state bought it at auction, hired builders, and legislated the leasing of convict labor to take the track over the hills.

By 1879 rail had been laid through Swannanoa Gap and into Asheville, though the process had cost numerous lives due to accidents and disease. The grade required seven tunnels between Old Fort and Black Mountain, passages cut with the first use of nitroglycerine in the southeastern United States. Around 1885 in Round Knob, a secluded cove looped by the railroad, private investors built a five-story resort hotel that quickly became a popular stop on the new rail line. A pond was dammed above the hotel and buried pipe dropped down the mountain, feeding a seemingly natural geyser that shot nearly 80 feet into the air in front of the lodge. When Round Knob Lodge burned in 1903, both the cove and its geyser fell into disuse.

In 1910 George Fisher Baker, a wealthy New York City banker, missed seeing the geyser on his train rides through the area. He asked the Southern Railway, then owner of the line, to let him restore it in honor of his friend, Alexander Boyd Andrews, who had served as president of the WNCR. By 1911 Baker had bought the land at Round Knob and restored the geyser, now named Andrews Geyser, constructing a five-lobed pool around its base. He donated the set-up to the Southern Railway, which promised to maintain it.

Economic conditions led the railroad to cease upkeep of Andrews Geyser in the early 1970s, soon after which the pipeline broke in pieces, the basin filled with mud, and the cove became overgrown. In 1975 the town of Old Fort asked the railroad for the property so it could be reclaimed, and the Southern complied. In May 1976 a restored Andrews Geyser and its surrounding area were opened to the public. The lake that supplies the modern-day geyser's water belongs to the Inn on Mill Creek.

Burke Davis, The Southern Railway: Road of the Innovators (1985).

I would like to get a high resolution photo of the Andrews Geyser and Round Knob Lodge, ca. 1890s. I understand it is in the North Carolina Collection, University of North Carolina at Chapel Hill Library. This photo will possible be used in a upcoming book being written by author, Bob Plott, and will be out in 2020.
Thank you
Linda Chastain