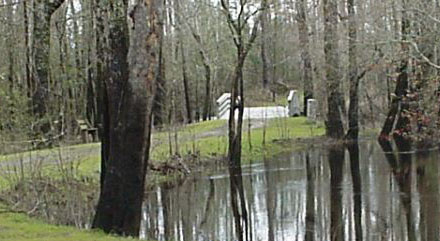 Fought in present southwestern Pender County on 27 Feb. 1776, the engagement at Moores Creek Bridge was the first battle of the American Revolution to take place in North Carolina. In early January 1776 exiled Governor Josiah Martin received notification from London that his plan to restore royal authority in North Carolina had been approved. Two commands of British regulars, one composed of seven regiments under Lord Charles Cornwallis and the other made up of 2,000 troops led by Sir Henry Clinton, would sail from Ireland and New England, respectively, and converge on the Lower Cape Fear River near Brunswick Town. There they would be joined by an army of Loyalists who would assist in putting down the rebellion.

On 10 Jan. 1776 Martin issued a call for loyal subjects to serve as troops and a proclamation ordering the Royal Standard to be raised in North Carolina. By mid-February approximately 1,600 Highland Scots and other Loyalists had assembled at Cross Creek (now Fayetteville). Commanding the troops was Brig. Gen. Donald MacDonald, a veteran of the Battle of Bunker Hill.

As the Loyalist forces finalized preparations for their march toward Wilmington, Col. James Moore, commander of the Patriot army in southeastern North Carolina, masterminded a strategy to foil MacDonald's rendezvous with the British regulars. When MacDonald began his advance on 21 February, Moore was able to block the initial route taken by the Highlanders. MacDonald altered his movement by crossing the Cape Fear River en route to Corbett's Ferry on the Black River. There he anticipated slipping past the militiamen of Col. Richard Caswell; his army would then proceed over the bridge at Moore's Creek and hasten on to Wilmington.

When Moore learned that MacDonald had won the race to Corbett's Ferry, he ordered Caswell's force to Moore's Creek, where they were joined by additional Patriot troops under Col. Alexander Lillington. Caswell and Lillington found that the narrow bridge, located on a sand bar, offered an excellent defensive position. Situated at the highest elevation in the area, the bridge crossed the dark, swampy creek at a place where the waterway was 50 feet wide and 3 feet deep. Also known at the time as Widow Moore's Creek because it flowed past land owned by widow Elizabeth Moore, the creek flowed into the Black River about ten miles above the river's confluence with the Cape Fear.

On the night of 26 February, Caswell manned the west bank of the creek with 800 soldiers while Lillington stationed 150 men near a slightly elevated knoll on the east bank. Moore positioned his 1,000 troops between Moore's Creek and Wilmington. While the Patriot forces assumed their defensive positions, MacDonald convened a council of war with his officers at his camp about six miles from Caswell on the same side of the creek. The decision was made to attack, but MacDonald fell ill, and command of the Highlanders devolved to Lt. Col. Donald McLeod.

At 1:00 a.m. on 27 February McLeod put his 1,500-man army on the march through the swamps in bone-chilling temperatures. After struggling through the wilderness for hours, the Highlanders caught sight of Caswell's camp, which had been abandoned during the night. To deceive the enemy, Caswell had left his campfires burning while he moved his force to the east bank. Following the night crossing, the Patriots had removed the planks from the bridge, greased the girders, and positioned artillery to cover the road and bridge.

At Caswell's abandoned camp, McLeod's troops regrouped and waited for daybreak to pursue the rebel army, which they thought was in retreat. But to the contrary, nearly 1,000 Whig soldiers were waiting across the bridge. The stillness of the swamp was broken at sunrise when 500 Highlanders, broadswords in hand, stormed toward the bridge. Bagpipes played in the background as the attackers shouted, "King George and broadswords!" Only a few Highlanders managed to make their way over the slippery remnants of the bridge, and they fell rapidly from the heavy fire coming from the Patriot breastworks. Within three minutes, the battle was over. About 70 Highlanders were killed or wounded. Among the dead was McLeod, a bridegroom of only a few weeks. The officer's body was riddled with 9 bullets and 24 swan shot. About 850 soldiers were taken prisoner, including General MacDonald, who was captured in his tent. The booty claimed by the victorious Patriots was substantial: 150 swords, 1,500 rifles, and £15,000. In the battle, the Whigs lost only one man, John Grady, who died four days later.

Called the "Lexington and Concord of the South," the Battle of Moore's Creek Bridge was significant for several reasons: it marked the permanent end of royal authority in North Carolina, it prompted the Provincial Congress meeting at Halifax on 12 Apr. 1776 to instruct North Carolina's delegation to the Continental Congress in Philadelphia to vote for independence, and it prevented the British from seizing control of the South at the onset of the war. The site of the battle, including the reconstructed bridge, has been preserved within Moore's Creek National Military Park. The 86-acre complex, operated by the federal government since 1926, is located one mile southwest of Currie.

Could you tell me who Moore's

Could you tell me who Moore's Creek was named for? I am wondering if the original owner was James Moore, Joseph Moore, or someone else. Thank you for any clues!

She might be related, but it's believed it was named after Elizabeth Moore, a widow and early settler in the area. https://www.nps.gov/parkhistory/online_books/mocr/adhi_1.htm

Can you give me any

Can you give me any information on Ezekiel Slocumb? I’m trying to get his rank. I believe the information regarding his wife, Mary, has been confirmed that her ride was a myth. I’m still interested in anything you might have on Ezekiel. Thank you.

Thanks for visiting NCpedia and asking your question.

I am forwarding your query to our Reference services who can assist you: http://statelibrary.ncdcr.gov/contact.html

Proud to be a direct

Proud to be a direct descendant of Patriot Major John DeVane, my 5th & 6th great grandfather.

What is the main summerry of

Family information has it

Family information has it that our ancestor Jacob Esau Daughtry, born in NC, fought as a Patriot at the Battle of Moore's Creek Bridge. Can this be verified? If so, we'd like to know in what unit and under whom he served.

Thank you for commenting.

There are 3 online sources I suggest. They won't answer the question if he fought at Moore's Creek Bridge, but can help verify he fought in the Revolutionary War. Our library does have books that would help answer the question if he fought and what unit, but our library is temporarily closed and staff working from home due to COVID-19. You can check back with our library at https://statelibrary.ncdcr.gov/contact-us/contact-form to see if we can check our sources at a later time.

First source is the Colonial and State Records of North Carolina at https://docsouth.unc.edu/csr/. It is an excellent source for pre-1790 information.

Also, our library has a large digital collection at https://digital.ncdcr.gov/ and it includes records of troop returns including for the Revolutionary War.

Finally, State Archives of North Carolina has an online catalog of some of their records such as wills, land grants, and Revoluntionary War pay through Army Accounts. https://archives.ncdcr.gov/doc

I am looking for information

I am sending your comment to our reference librarians who will be able to assist you.