North Carolina is a state in the southeastern United States, and it is bordered by Virginia, Tennessee, South Carolina, Georgia and the Atlantic Ocean. This page lists some basic, quick facts about North Carolina and provides links to other useful information. 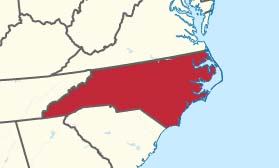 State Motto: Esse Quam Videri: To be rather than to seem

Seats in the U.S. House of Representatives: 13