Originally published in "North Carolina Nursing History." Republished with permission. For personal educational use and not for further distribution. Please submit permission requests for other uses directly to the website creators.
https://nursinghistory.appstate.edu/

On July 11, 1939, in a sharecroppers shack without electricity or running water in Willow Springs, NC, Caretha Leach, with her mother as midwife, gave birth to her fourth of ten children, Clara Leach. 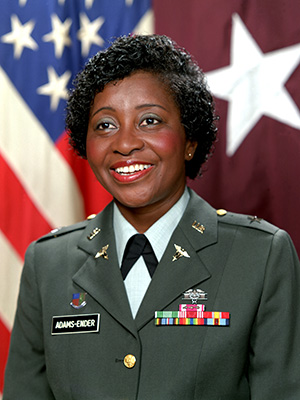 From this humble beginning, Clara Mae Leach Adams-Ender rose to achieve the rank of Brigadier General in the U.S. Army and led over 22,000 nurses in the U.S. Army Nurse Corps.  Along with her nine siblings, Adams-Ender spent much of her childhood working in  tobacco fields earning money for the family. As a result she missed a lot of school. However, her parents understood that it was only through education that their children could break free from the choke hold that tenant farming imposed on their own and many other African American families in that era. In an interview published in Notable Black American, Adams-Ender recalled her parent’s belief that she could do anything she wanted if she put her mind to it.  As the result, Adams-Ender became a passionate student. In order to make up schoolwork she missed while working on the farm, she had classmates give her assignments to her school bus driver, who would drop them off as he passed her house on his route. Adams-Ender’s dedication paid off.  She graduated second in her class from Fuquay Springs Consolidated High School at the age of 16.

In the fall of 1956, Adams-Ender entered the North Carolina Agricultural and Technical College (NCA&T) in Greensboro.  She was there at a pivotal time in U.S. history.  Until the Civil Rights movement of the 1960s, the former Confederate States, including North Carolina practiced strict racial segregation. By law and custom, owners of public accommodations such as restaurants, motels, movie theaters, public parks, schools and hospitals denied service and/or admission to African Americans. While the Civil Rights struggle has been continuous in the United States since the end of the Civil war, it reached a turning point in the 1960s.  Students from NCA&T are often credited with launching a new and crucial tactic in the modern Civil Rights Movement, the sit-in. On February 1, 1960, four male students from NCA&T went to the lunch counter at the local Woolworths store and sat down to order a meal.  At the time, African Americans could receive service if they entered through the back door of the store, stood up while placing an order and then took their food off the premises to eat it. The students were denied service and returned to campus to publicize their actions. The next day twenty NCA&T students went to the Woolworth lunch counter to “sit-in”.  Each day the number of people sitting - in grew as more students from NCA&T and other local colleges took a stand against segregation.

Adams Ender was one of these heroic students. They risked arrest and a variety of hostile acts from local white racists, including the Ku Klux Klan.  As word of the sit - ins spread, students in other southern cities sat in at their local restaurants. It proved to be one of the most successful strategies to integrate public accommodations across the south.  In a 2005 interview Adams-Ender recalled her involvement with the sit ins this way:

'We went down and sat down. We would go down in groups of four to six, and we would exchange with the group that was leaving, and they would tell us about what had gone on during the time that they were there. We'd sit for an hour or so at the time. There was a leader, as far as our group was concerned, and he went down and he announced to the—a manager had come out, of course, by this time— and he said, “We would like to be served at this lunch counter,” you know.  And the manager said, “We don't serve Negroes here.” And, of course, that was a polite way of saying other derogatory terms that we knew about.  And the young man said—and, of course, we'd practiced many of these comebacks that we needed to deal with—and he said, “No sir, and I don't eat them either. So how about a hamburger and a Coke?”  And, of course, we had to sit there and show our somber faces.  And he said, “No, we will not serve you at this counter.” And then he went on away, and we'd sit there for our period of time, on four to six stools in this area, and then we'd go away and the next group would come. But during our periods of sitting there we just kind of looked around and made sure that we watched what was going on, but we had no problems.'

Initially, Adams-Ender considered a career in law, however, her family’s financial situation influenced her to take an Army Student Nurse Program scholarship to pay for her last two years of college.  In return for college scholarship monies, upon graduation she became a U.S. Army nurse at the rank of 2nd Lieutenant for two years.  Adams-Ender graduated from NCA&T in June, 1961 earning her Bachelor in Science in Nursing degree and after passing her state board of nursing examinations, joined the Army in August 1961.

She found the life of an Army officer agreed with her.  She traveled around the globe serving in various Army hospitals.  At different postings throughout her Army career, she furthered her education.   In 1969 she earned a Masters of Science in  Medical-Surgical Nursing  from the University of Minnesota, in 1976 she earned another master's degree in military arts and sciences, from the  Army Command and General Staff College (ACGSC) at Fort Leavenworth, KS and finally she earned a diploma in management relations and leadership in1982 also from the  Army Command and General Staff College at Fort Leavenworth, KS.

Adams-Ender not only stood up for the rights of African Americans, she also fought for equality for women.  She remembers her days as a Masters student (1975-1976) at ACGSC this way:

'The number of other females in school with me during that period was seven, out of eleven hundred officers.  There were eight of us in the course, and there were two of us who got together on a regular basis to talk about things that happened to females in the military. So Claudia and I would try and hold meetings with the other women, you know, to talk about what was going on and if there was anything we needed to bring to the attention of the course directors.  And none of them would meet with us, because if they did they felt that they'd be criticized by the men that were in their sections for trying to do things in secret that they didn't know about. Little do they know that men do things in secret all the time, and don't intend to tell you.  So we said, “Well, you don't have to worry.” It was 1976. I was there—I graduated in Class of '76 from Command and General Staff College, and, of course, that was the year of the Bicentennial. But that was also the International Year of Women, and all across the army they were putting on these programs to talk about what contributions women had made to the military and to defense.'

Among the awards bestowed on Adams-Ender are the Distinguished Service Medal with Oak Leaf Cluster, Legion of Merit, Meritorious Service Medal with three Oak Leaf Clusters, and the Army Commendation Medal. She retired from military service in 1993. In 2001 she published an autobiography, My Rise to the Stars: How a Sharecropper's Daughter Became an Army General. In 1981 she married Dr. F. Heinz Ender.

Adams-Ender, Clara & Walker, B.S. (2002) My Rise to the Stars: How a Sharecropper's Daughter Became an Army General, CAPE Publishing.

Images of Clara Adams-Ender, from a variety of institutional collections, available online at the Digital Public Library of America: https://dp.la/search?utf8=%E2%9C%93&q=adams-ender