Prior to formation of 1st N.C. Colored Volunteers about 100 black men were armed to aid Union forces during the siege of Washington in 1863.

During the siege of Washington in April 1863, Union troops armed African Americans to participate in the defense of the town. The incident is an early example in North Carolina of the shift in U.S. policy towards recruiting African Americans for military service in the Civil War. 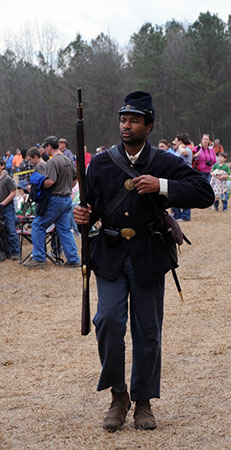 At the beginning of the war, the United States did not recruit African Americans for military service. Although President Abraham Lincoln had long detested slavery, he felt not only bound by slavery’s Constitutional protections but also wished to keep the slaveholding states of Kentucky, Missouri, and Maryland within the Union. Lincoln’s initial war plans were thus based on restoring the Union, not emancipation. This policy gradually succumbed to the realities of war. The escape of slaves into Union lines led some military commanders to forbid their return to their owners in order to hamper the Confederate war effort. Some Union commanders put escaped slaves to various types of military labor, while others utilized slaves and free blacks as spies and scouts.

In the meantime, black and white abolitionists strenuously advocated the recruitment of African Americans as soldiers to provide an opportunity to show the government and the Northern public that emancipation was worthy of support, and to allow African Americans an opportunity to strike a direct blow against slavery by defeating the Confederacy. These developments led to a shift in Lincoln’s policy. In September 1862, he issued his preliminary Emancipation Proclamation. The idea of recruiting African American as soldiers now took on a new life. By early 1863, the first African American regiments were beginning to organize.

Following the arrival of Federal forces in eastern North Carolina in early 1862, thousands of escaped slaves made their way to the coastal zone controlled by Union troops. Efforts to organize African Americans in the area were initially scattered, and reflected the uncertainties of early Union policy. Immediate manpower necessities were often the cause. Federal troops occupying Elizabeth City armed African Americans to act as pickets as early as October 1862. The siege of Washington provided another practical opportunity to implement the new policy, as the need to provide additional strength for the garrison led to the arming of African Americans.

Although Foster made no mention of arming African Americans at Washington in his April 30 campaign report, he did so in a May 4 letter to U.S. secretary of war Edwin M. Stanton. However, he credited the initial idea to the African Americans themselves: “During the late attack on Washington, the negroes applied to me for arms, and to strengthen my lines I armed about 120, all that I had arms for.” The April 13, 1863 entry of a wartime diary by a member of the 44th Massachusetts indicated that 100 African Americans were among the town’s defenders by that date. This figure, and Foster’s slightly larger estimate of “about 120,” should be considered approximate.

It is known that at least two African American boatmen were killed during the siege while conveying Union troops down the Pamlico River on the night of March 30-31, 1863, as a Federal expedition by a company of the 1st Regiment N.C. Volunteers (Union) to Rodman’s Point was forced to withdraw under heavy fire. One of the boatmen was mortally wounded when his boat was stuck in the sand. In an effort to save the soldiers and his fellow boatmen, he got out of the boat and pushed it into the water, but was hit multiple times and died after subsequent unsuccessful surgery back in Washington.

The boatman’s story was reported in the Cleveland Morning Leader, quoting Assistant Surgeon Theodore W. Fisher of the 44th Regiment Massachusetts Infantry. Fisher did not witness the event as his regiment was not involved. He probably obtained his information from Surgeon Robert Ware of his regiment, who operated on the wounded man and likely had an opportunity to talk to the men who had brought him in. The story soon became the subject of a poem celebrating the slain man’s act of heroism. After the war, African American activist and writer William Wells Brown wrote a longer account of the incident. According to Brown, the man was an escaped slave known as “Big Bob,” who had recently arrived in Washington.

The other boatman killed in the Rodman’s Point incident fell into the river, according to an account in a New York newspaper. His body was subsequently recovered by the Confederates and left for the Federals when Rodman’s Point was evacuated on April 15 along with various damaged artillery pieces.

Following the siege of Washington, a systematic effort to recruit African American soldiers in North Carolina began. The roots of this project predated the siege. On April 1, Massachusetts governor John A. Andrew had suggested to Stanton that a large African American force could be raised in North Carolina. Col. Edward A. Wild was selected to oversee the task and promoted to brigadier general. Wild arrived in New Bern later in May, and began to recruit African Americans for what became the 1st North Carolina Colored Volunteers (later redesignated the 35th Regiment United States Colored Troops). Two more infantry regiments and an artillery regiment would eventually follow.

Although the siege of Washington does not mark the first attempt in North Carolina to arm African Americans to fight against the Confederacy, it is nevertheless one of several important early steps towards the formal organization of African Americans for military service in the state, and deserves to be remembered on those grounds.

Paul S. Yendell, “Washington,” in James B. Gardner et al., Record of the Service of the Forty-Fourth Massachusetts Volunteer Militia in North Carolina, August 1862 to May 1863 (1887)

United States War Department, The War of the Rebellion: A Compilation of the Official Records of the Union and Confederate Armies (1881-1902), series I, volume 18, and series III, volume 3

William Wells Brown, The Negro in the American Rebellion: His Heroism and His Fidelity (1867)