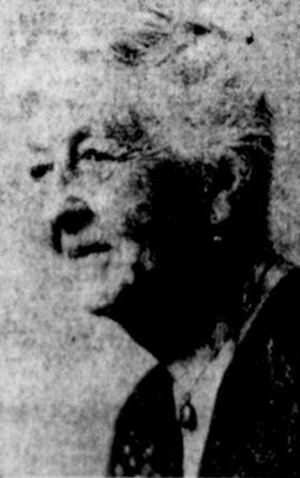 Lila Ripley Barnwell, poet, suffragette, and community activist, was born April 18, 1863 in Hendersonville, North Carolina to Col. James M. Ripley (also referred to as Valentine Ripley), originally of Virginia, and Mary A. Ewart of South Carolina.  Col. Ripley was the operator of Hendersonville's first hotel and stagecoach depot before rail arrived, while her mother was an author whose stories were published in magazines and periodicals.
Barnwell received her early education from her mother and an unnamed governess and then attended Mary Baldwin Seminary in Stauton, Virginia at the age of 14.  Later becoming an accomplished poet in western North Carolina from the publication of her volumes Heart Songs and Rhymes from Laurel Land, she began her writing career at age 11 when she wrote a letter to a State Representative asking for legislation to protect wildlife, particularly birds. Having developed knowledge of and interest in public affairs, particularly women's suffrage, at age 18 she became a delegate and an active member of the first North Carolina Woman’s Suffrage Convention in Charlotte.
Her active participation in the community included becoming the first president of the local chapter of the United Daughters of Confederacy, a member of the Daughters of the American Revolution, participation in the the Women’s Club and Women's Auxillary, and membership on the Board of Public Charities. Barnwell described herself as a Presbyterian and Republican who was extremely active in politics; others referred to her as a mountain poetess, a matriarch, a suffragette, and an “authority on birds”.

In 1884, at the age of 21, Lila Ripley married Rafe Izard Barnwell of Charleston, South Carolina. Their marriage was cut short by Rafe’s death while Lila was still in her twenties.  Increasing her writing after this time, she contributed to different newspapers and magazines, and her poems were reportedly featured in The Washington Post, the Charleston News and Courier, and The Charlotte Observer. The Raleigh, North Carolina News and Observer published a number of her poems in several issues, and one of her more well-known poems, "Red Roses", was published in the October 3, 1894 issue.
Known regionally as a writer, she was invited in June 1927 to speak at the unveiling of a number of
commemorative tablets in Fletcher, North Carolina that were dedicated to several poets and songwriters (although not themselves North Carolina natives) whose works had particular meaning for local memory, including Bascom Lunsford (credited with writing the song "Dixie"), the mid-western poet James Whitcomb Riley, and Stephen Collins Foster (composer of "Suwannee River").
Barnwell focused her writing in particular on her connection to North Carolina and its mountains. In 1923 in an unpublished undergraduate thesis, Elon College student Mary Swanson conveyed Barnwell's sentiments: “I am a mountaineer, a native of Hendersonville, exceedingly proud of my state and my own section of country. I have travelled abroad having spent some time in Europe, Asia, and Africa. My foreign experiences were interesting and delightful, but I returned to my own land more satisfied than ever with our country, our ideals, our history, our opportunities, and our people.”  Barnwell sought to preserve in her writing the 19th century ideals and traditions of North Carolina.
Lila Ripley Barnwell Barnwell was a lifelong member of the First Presbyterian Church of Hendersonville, which both parents helped found in 1852.  She died on March 6, 1961, a number of weeks short of her 98th birthday, and appears to have been buried in a family plot in Oakwood Cemetery in Hendersonville, NC.