View North Carolina's copy of the Bill of Rights: https://digital.ncdcr.gov/digital/collection/p15012coll11/id/29 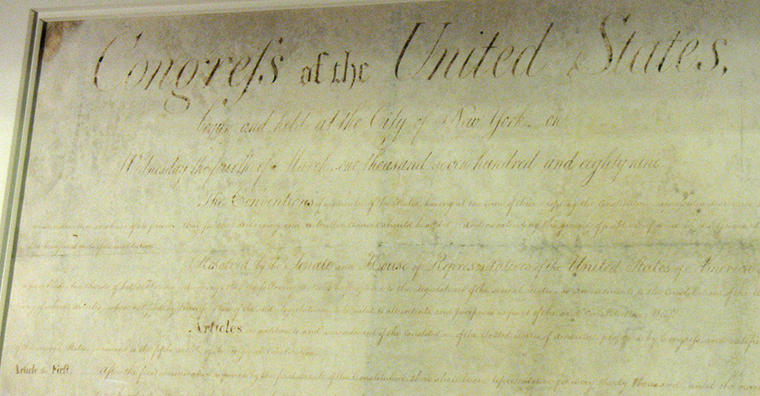 North Carolina's original copy of the Bill of Rights, stolen in 1865, had a long and checkered journey before it finally returned to the state in 2005. The Bill of Rights was created in 1789, in part to address the concerns of citizens (then, white males who were eligible to vote) about the extent of the government's powers under the Consitution and to help secure ratification of the Consitution by North Carolina and Delaware. Those two states had yet to ratify the document by the fall of 1789. The Bill of Rights became the first 10 amendments to the Constitution.

Following passage of the amendments by Congress, President George Washington sent letters with handwritten copies of the Bill of Rights for ratification to the 11 existing states that had ratified the Constituion and to North Carolina and Delware, who had yet to do so. North Carolina ultimately ratified the Constitution, along with the Bill of Rights, on November 21, 1789.

The state's copy of the Bill of Rights was stored, along with other important governmental papers, somewhere in the Capitol building in Raleigh. During the occupation of the city by U.S. General William Sherman’s army during April and May of 1865 at the end of the Civil War, a Union soldier stole it as a souvenir along with other papers. This unknown soldier took it home to Tippecanoe, Ohio (now Tipp City), and in 1866 sold it for $5.00 to a Charles A. Shotwell of Troy, Ohio.

In 1897, N.C. Secretary of State Dr. Cyrus Thompson read a news story about Shotwell indicating that he had the Bill of Rights on the wall of his Indianapolis, Indiana office. Thompson, working through the Indiana Secretary of State, tried and failed to persuade Shotwell to return the stolen document. An article on the subject of Shotwell's possession of the document and North Carolina's interest in its return ran in the Indianapolis News on October 1, 1897.  The article included the heading that Shotwell was "Averse to Giving it Up" and that he "said it was his property, valuable to him as a relic and souvenir of the war, and that he certainly would not give it up on any 'demand,' no matter from whom such a demand might come."

In 1925, Charles I. Reid of Harrisburg, Pennsylvania, representing Shotwell, contacted the North Carolina Historical Commission to sell it to the state. Robert B. House, secretary of the Commission, refused, responding emphatically that it was the rightful property of North Carolina: “title to it has never passed from… North Carolina to any individual." Both Shotwell and the Bill of Rights later disappeared.

The location of the document was then unknown for 70 years until Washington, D.C. attorney John L. Richardson, representing an unnamed person, offered to sell it to the state in 1995. North Carolina once again held fast to its principles and asserted it was the rightful owner and would not pay for stolen property. It later came to light that the unnamed person was Connecticut antiques dealer Wayne Pratt, who had appeared on the popular PBS television series Antiques Roadshow. Pratt had bought the document from Shotwell's heirs in 2000. In early 2002, Pratt tried to sell the Bill of Rights to the National Constitutional Center in Philadelphia. The Center contacted George Washington Unviersity's First Federal Congress Project to help verify the authenticity of the document. The Project subsequently authenticated the document as, indeed, North Carolina’s original copy of the Bill of Rights. Pennsylvania Governor Ed Rendell, a member of the Center’s board, contacted North Carolina Governor Mike F. Easley, proposing each state share the cost of the purchase. North Carolina refused the offer to share the purchase, once again asserting its rightful claim to the document. Governor Easley had state Attorney General Roy Cooper work with the U.S. Attorney's office in Raleigh to obtain the stolen document. The Federal Bureau of Investigation set up a “sting” operation in Philadelphia where agents finally seized the document on March 18, 2003.

A lengthy and drawn-out legal battle then began. While Pratt relinquished his claims to the document in federal court in September of 2003 to avoid criminal charges, Pratt’s partner, businessman Robert V. Matthews, continued to claim co-ownership of the document and demanded compensation. On January 23, 2004, Chief Judge Terrence W. Boyle of the U.S. District Court for the Eastern District of North Carolina ordered that the disputed document be returned to the State of North Carolina as a public record. He ordered the U.S. Marshals Service to keep custody of the document until the case was over.

On August 4, 2005, Judge Boyle awarded possession of the document to the State of North Carolina. Governor Mike Easley accepted the document, which was conserved, framed, and then placed in the vault of the State Archives. However, legal ownership of the document was still to be determined. Finally, on March 24, 2008, Wake County Superior Court Judge Henry W. Hight, Jr. issued a summary judgment order that ended all remaining claims to the document and declared North Carolina as the exclusive owner of its original copy of the Bill of Rights to the exclusion of all other claims.

In 2007, the document toured seven North Carolina cities: Wilmington, Fayetteville, Edenton, Greensboro, Charlotte, Asheville, and Raleigh. And on March 18, 2013, the N.C. Department of Cultural Resources (now the Department of Natural and Cultural Resources) gave a special program to celebrate the 10th anniversary of the recovery of North Carolina's copy of the Bill of Rights. The program included remarks by Attorney General Roy Cooper, N.C. Supreme Court Justice Paul Newby, and Lieutenant Governor Dan Forest. It was also an opportunity for members of the public to view the rarely-seen document.