By Kathelene McCarty Smith, 2016
Originally published in Spartan Stories, Tales from the University Archives at The University of North Carolina at Greensboro. Published with permission.

Louise Brevard Alexander was a woman ahead of her time. A strong advocate of suffrage and of women’s education, Alexander would make her mark in North Carolina as a lawyer, a judge, and an educator. Described as scholarly, conscientious, dynamic, and inspiring, she became one of the most popular teachers at Woman’s College (now The University of North Carolina at Greensboro) from her arrival in 1935 until her retirement in 1957. Hired to replace her friend, Harriet Elliott, who had been appointed to the staff of the Democratic National Committee, Alexander taught history and political science to young women for the next two decades. 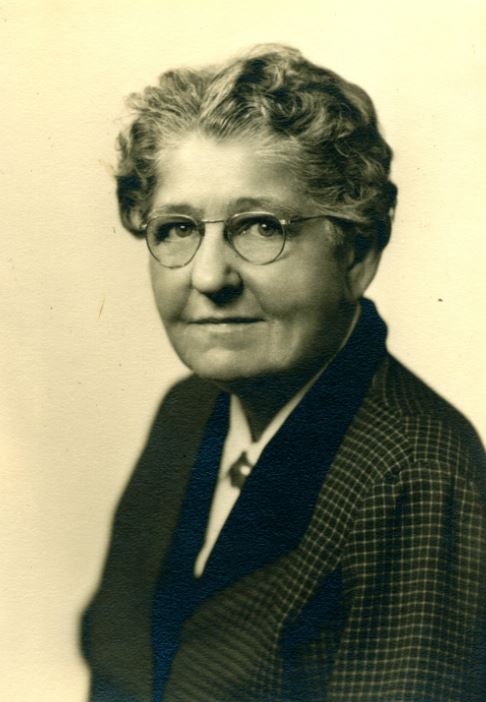 Louise Alexander and Harriet Elliott had been fast friends since they arrived in Greensboro in the early 1900s. Bonding over their devotion politics and to the Suffrage Movement, they were active in the League for Women Voters and tireless advocates for the 19th Amendment supporting women’s right to vote. Alexander’s captivating speaking style rallied the women of North Carolina to endorse the ratification of the proposed amendment, declaring “Raise fewer Dahlias, and a lot more hell! The place is here, the time is now. The opportunity is yours. It is not the time for women to be alone. They must work together.”

Alexander remained outspoken about world politics, and her activism continued through the years of World War II. Attempting to give a historical background for understanding national and world events, she taught courses in political science and history to her students and gave presentations to the community. She also dispersed recruitment information to young women on campus who might be interested in joining the military. Alexander became known at the college and in the community as a “Human Reference Library” for legal issues as well as national and international political affairs

Her interest in government and political activism was a natural progression of her early life and career choices. Born in 1887 in Hickory, North Carolina, she graduated from Presbyterian College (now Queen’s College) in Charlotte, where she was the president of the student body, the president of her literary society, the editor of the yearbook, the captain of the Daddy Rabbit Tennis Team, and a member of many clubs, including the Epicureans. After graduating from Presbyterian College in 1907, Alexander pursued graduate studies at the University of Tennessee before taking a faculty position at Lees-McRae College in Banner Elk. In 1911, she moved to Greensboro to teach history, civics, and economics at Greensboro Senior High School (now Grimsley High School).

Deciding that she needed to expand her horizons, Alexander changed the course of her life by deciding to attend law school at the University of North Carolina at Chapel Hill. After being admitted to the North Carolina Bar in 1920, she returned to Greensboro as the first woman lawyer in Guilford County. She was appointed as Clerk of Municipal Court in 1923 and served concurrently as juvenile court judge until 1935, when she began her tenure as an extraordinarily popular political science professor at Woman’s College. She continued her interest in politics for the rest of her life. Alexander and Harriet Elliott, both influential forces in the Democratic Party, had a standing dinner date for the next thirty years, listening to the election night returns on the radio.
Known for her love of reading, music, cooking, baseball, but especially for her chief hobby of “dogs, dogs, and more dogs," Alexander was a favorite among the students at Woman’s College. Referred to as “Miss Alex,” she made her classes “a lively experience of the living past in which leaders and people live again in their political struggles and aspirations for freedom and democracy.” Her courses were extremely popular, both because of her ability to make politics vital and timely and her reputation for being an easy grader. Often more than 150 students would squeeze into her classroom to hear her to explain “how to live.”

Her dedication to teaching and to her students culminated in being honored with the first O. Max Gardner Award in 1949, presented to “that member of the faculty of the Consolidated University of North Carolina who in the post academic year has made the greatest contribution to the human race.” In 1960, Alexander was further honored by the dedication of a conference room in her name in the Elliott Center (now the Elliott University Center) in recognition of her service to the college as a professor and as an advisor to the Judicial Board.

After a long and incredibly active life, Alexander died at High Point’s Maryfield Nursing Home on May 30, 1978, leaving as a legacy a generation of students to whom she taught the importance of political activism, public service, and women’s rights.