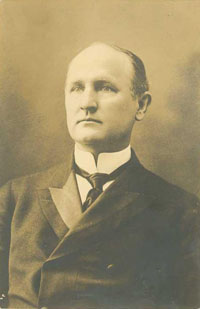 No North Carolina governor, with the possible exception of Zebulon B. Vance, has been as venerated and memorialized as Charles Brantley Aycock (1859-1912), with whose term in 1901 the Democratic Party inaugurated a seventy-two year hold on the state’s highest elected position. The “Education Governor” was born near Nahunta (present-day Fremont) in Wayne County on November 1, 1859, on the farmstead of his parents, Benjamin and Serena Hooks Aycock (the restored birthplace is now a state historic site). The elder Aycock served in the state senate from 1862 to 1866. Charles, the youngest of ten, attended private academies in Fremont, Wilson, and Kinston. At sixteen he taught for a term in a public school in Fremont. At the University of North Carolina, where he enrolled in 1877 and graduated three years later, Aycock honed his debating skills. In 1879 he delivered in Durham County his first public address, appropriately on the value of education. In 1881 Aycock married Varina Woodward; they had three children. In 1891, two years after Varina’s death, he married her sister Cora; they had seven children.

Charles B. Aycock was licensed to practice law in 1881 and soon set up practice in Goldsboro with Frank A. Daniels. Aycock, who had edited a small weekly, the Ledger, in Chapel Hill, in 1885 co-founded the Daily Argus in Goldsboro but it was politics which consumed his energies. In 1890 he sought but failed to gain the Democratic nomination to the United States House from the Third District. Aycock distrusted the Republican Party; and, reacting to what he viewed as abuses of the political system during Reconstruction, endorsed the idea that politics should be reserved for the white race. “Aycock believed in the right of the white man to rule as profoundly as he believed in God,” according to a 1912 biography.

As he sought to build a political reputation Aycock worked tirelessly in behalf of the public schools. His experience with the local school board in Wayne County convinced him that education was the key to wise and purposeful social change. From 1893 to 1897 he was U.S. attorney for the eastern district of the state. His stock as a stump speaker rose in this period and in 1898 he pressed his views on race and education in a statewide series of debates with Populist Cyrus Thompson. In 1899 Aycock worked closely with legislators to disfranchise black voters by means of literacy tests, poll taxes, and the “grandfather clause.” A groundswell of support led to his nomination for governor by the Democrats in 1900. He was elected over Republican Spencer B. Adams by 60,000 votes, the largest margin for any candidate in state history to that date.

As governor, Aycock, touting the "Dawn of a New Day,” continued to press for educational progress. His views on white supremacy notwithstanding, he opposed attempts within the legislature to fund white schools from the white tax base and black schools from the black base. He believed that universal education would lead to higher literacy rates and in time to universal suffrage. Aycock opposed but was unable to stop lynchings during his term. He advocated reforms of child labor and temperance laws but met mixed success with the legislature. Aycock supported increased corporate taxes and devised a compromise for more equitable tax assessment on railroad property.

After his term as governor, Aycock returned to the practice of law, first in Goldsboro and after 1909 in Raleigh with Robert W. Winston. He received honorary degrees from the University of Maine in 1905 and UNC in 1907. In 1911 he declared his candidacy for the United States Senate. Those plans were cut short on April 4, 1912, by his death on a speaker’s platform in Birmingham, Alabama, where he was addressing an educational organization. Aycock, a Baptist, is buried in Oakwood Cemetery in Raleigh.

Proud to think he was my

Proud to think he was my ancestor only a few generations back. He was a cousin thru my grandfather Rual Aycock.

very helpful used this for a

very helpful used this for a essay

Thanks for the research about

Thanks for the research about C B A