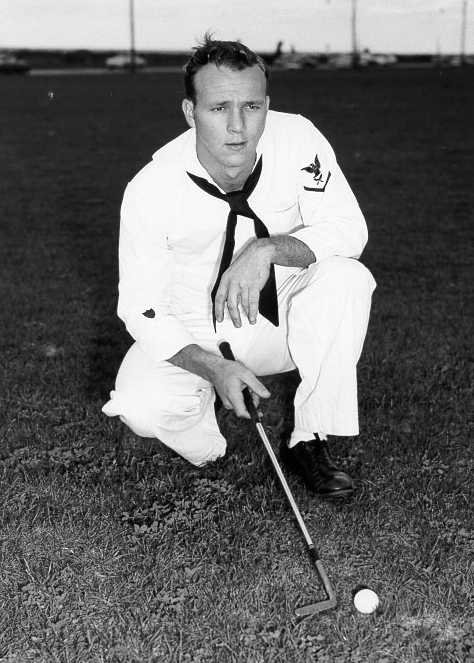 Every sport has one quintessential player who transforms the game from pastime to art form, a person who attracts public attention by presence alone. In the world of golf, this person is Arnold Palmer. The personable Palmer drew crowds, (eventually dubbed "Arnie's Army"), to the links to watch a sport that had previously been thought to be played exclusively by the elite. His expertise has secured him a place in the World Golf Hall of Fame in Jacksonville, Florida, the PGA Hall of Fame, the North Carolina Sports Hall of Fame in the North Carolina Museum of History in Raleigh and the American Golf Hall of Fame in Foxburg, Pennsylvania.

Arnold Palmer was born in Latrobe, Pennsylvania, on September 10, 1929 to Milfred J. "Deacon" and Doris Palmer. "Deacon" Palmer was a golf professional and the course superintendent at the Latrobe Country Club . He passed his passion for the sport to his son. The young Palmer began playing golf with clubs cut down to his size and played in many local tournaments while still in grammar school. During his junior year of high school, Palmer played in his first national competition. While playing in this tournament Palmer met Buddy Worsham, a fellow competitor who convinced Palmer to join him in pursuing his education at Wake Forest College, (now Wake Forest University), in Wake Forest, North Carolina. The two golfers quickly became good friends.

Tragedy struck in 1950 when Worsham was killed in an auto accident. Arnold Palmer left Wake Forest and joined the Coast Guard, where he served three years, seeing action in the Korean Conflict and continuing to develop his golf skills. After his military service Palmer returned to Wake Forest in 1954 to complete his degree in Business Administration. In that same year Palmer led the Demon Deacons to their first Atlantic Coast Conference golf title. After graduating from Wake Forest Palmer accepted a position as a manufacturer's representative in Cleveland, Ohio. 1954 proved to be the beginning of other great things for Arnold Palmer. He met and married Winnie Walzer and won his first national golf title, the US Amateur Championship.

With the encouragement of his wife, Palmer became a professional golfer, won the Canadian Open in 1955 and captured television audiences with his aggressive golfing style and pleasant personality. In 1958 Palmer won three championships, including the Masters. Larger numbers of fans were beginning to notice Palmer and "Arnie's Army" was born.

During his long career Palmer won 91 tournaments. Half of these victories came between 1960 and 1963. Sixty-one of Palmer's wins came on the PGA tour. "Arnie's Army" saw its leader victorious at the Masters in 1958, 1960, 1962 and 1964. Palmer won the US Open in 1960 and the British Open in 1961 and 1962. In later years, Palmer won eleven tournaments on the Senior Tour. Palmer was named PGA Player of the Year twice, Associate Press Athlete of the Decade for the 1960s, 1960 Hickok Athlete of the Year, Sportsman of the Year in 1960 by Sports Illustrated and Golfer of the Century by the New York Athletic Club.

Palmer owned or managed several golf courses through his company Arnold Palmer Enterprises and was also an experienced pilot. For many years he traveled to and from tournaments piloting his own plane and often did a course fly-over when departing. He circumnavigated the globe in a Learjet 36 in 1976, setting a record of 57 hours, 25 minutes, and 42 seconds, and the flight included stops at a number of cities.

His Palmer Course Design Company designed over 200 golf courses while his Arnold Palmer Golf Academy is well known in the golfing world. Palmer also gave much time to charity work and served as Honorary National Chairman of the March of Dimes Birth Defects Foundation for 20 years.

Arnold Palmer died from heart problems on September 25, 2016 at age 87 in Pittsburg, Pennsylvania.  He is remembered as a champion athlete who popularized golf for everyday people. On the popular social media site Twitter, the President of the United States, Barak Obama, tweeted "Here's to The King who was as extraordinary on the links as he was generous to others. Thanks for the memories, Arnold."

"Arnold Palmer," ca.1950. From the Historian's Office of the United States Coast Guard.

Thank you for the informative

Thank you for the informative article. In the 4th paragraph from the bottom, it begins with "Palmed" instead of "Palmer". I just wanted to point it out so that it could be corrected.

Thank you for letting us know

Thank you for letting us know. We have made the correction.

Thank you for visiting NCpedia and providing us feedback. I will forward your comment to our NCpedia team.