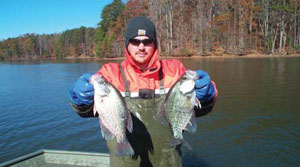 Crappie fry feed on yolk sac for 3 to 5 days, and then they leave the nest. Maturity is reached at an age of 2 to 3 years.

A maximum age of about 9 years. 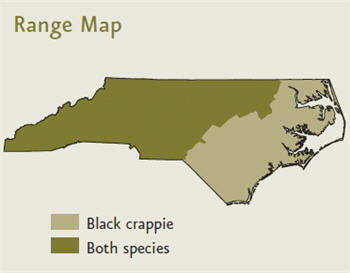 Crappies are native to North Carolina. Both crappie species move to shallow water to mate in the spring, making them easier for anglers to catch. Some people think the crappie is the best-tasting fish to eat!

Papermouth, “sac-a-lait” (bag of milk) and speckled perch are just a few of the nicknames people have given the crappie. Two species found throughout North America are the black crappie (Pomoxis nigromaculatus) and the white crappie (Pomoxis annularis). They are members of the sunfish family, which also includes largemouth bass and bluegill. Crappies are two of the largest of the panfish species. Over the years, their sportiness on light tackle and their quality as “tablefare” have made them increasingly popular among freshwater anglers. Today, the black and white crappies are among the most fished-for species throughout North Carolina and much of the southeastern United States. About one-third of all sportfish harvested are crappies.

The black crappie is distinguished by irregularly spaced black blotches on its silvery-green to yellowish sides. In the white crappie these blotches often form vertical bars.

Crappies have an extraordinarily high reproductive rate. The spawning season for both species in North Carolina lasts from about March through May, when water temperatures warm to the 60- to 68-degree range, and the white crappie spawns when the water temperatures reach the 58- to 64-degree range. Males select the nest sites and clear circular beds 8 to 15 in. in diameter. The beds are often located in water that is 3 to 8 ft. deep. Black crappie nests are frequently found in gravel or in soft, muddy river or lake bottoms. White crappie nests are often located near structures such as brush piles, stumps or rock outcrops. Each spawning black crappie female produces between 11,000 to 188,000 eggs, while each white crappie female produces 2,900 to 91,700 eggs. Males guard the eggs, which hatch within 3 to 5 days. After the eggs hatch, males continue to guard the fry (newly hatched fish) for a few days until the young leave the nest.

Microscopic animals, called zooplankton, and insects are the preferred foods of these young-of-the-year black and white crappies. On this diet, they can grow up to 4 in. during the first 12 months. When they reach 6 to 8 in., young crappie eat mostly smaller fish and minnows.

Adult crappies prefer forage fish found in the open-water areas of reservoirs, particularly thread-fin and gizzard shad. They are, however, often willing to feed on anything that fits into their mouths, including their own young. When little or no prey fish are avail able, which is often the case during the winter and early spring, adults will shift back to feeding on insects.

The black crappie grows slower than white crappie, but because of its stockiness, a black crappie will weigh more than a white crappie of similar size. The rate of growth depends on habitat, food availability and crappie population size for a given body of water. Too many crappies and not enough food results in slow growth or stunting. The tremendous reproductive capability of crappie species often results in stunting, particularly in small ponds. 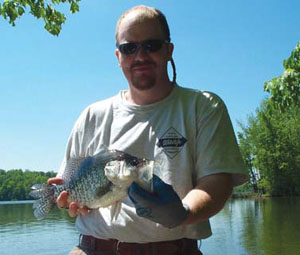 Crappie species are most encountered by anglers. Fishing for crappies is very popular in North Carolina, and fishermen consider crappies to be excellent sportfish. They can be caught on a variety of fishing equipment including cane poles, spinning and bait-casting outfits, fly rods and ice-fishing gear. Anglers usually try to locate a school of crappies and fish for them using minnows, small jigs or a combination of the two. Care is required when setting the hook or when landing the fish because its soft papery mouth tears easily, allowing hooks to pull out. Crappie species are most active and easily caught at night and in the early morning.


NCWRC Interaction: How You Can Help 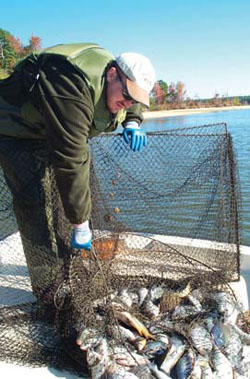 Biologists with the Commission’s Division of Inland Fisheries evaluate crappie populations in many reservoirs and rivers throughout North Carolina. Many Piedmont reservoirs contain excellent crappie populations. The B. Everett Jordan Reservoir in Chatham County contains high numbers of crappie greater than 10 in. This fishery is a great example of cooperation between Commission biologists and the public to create a production fishery for now and for the future. NCWRC biologists have established that a 10-in. minimum size limit and a 20-fish-per-person daily creel limit were needed to protect mature, adult crappie in this reservoir. Without the cooperation of anglers complying with the new regulations, B. Everett Jordan Reservoir would not be the outstanding crappie fishery that it is today.