Weldon C. Burlison (also spelled “Burleson”) was born on November 25, 1911, in Yancey County to Henry Wilburn and Minnie Bell Burlison. By 1920, the Burlison family were living in Jacks Creek Township in Yancey County, where Weldon’s father worked as a farmer. Weldon Burlison was raised in Yancey County, and attended Clearmont High School in Burnsville. He served in two branches of the military, first in Marines for four years and then following honorable discharge, he re-enlisted with the U.S. Army Air Corps. He was the first reported war casualty for World War II from western North Carolina and one of the first reported North Carolina casualties from the Japanese attack at Pearl Harbor.

Weldon Burlison attended Maryville College in Tennessee and enlisted in the U.S. Marine Corps on August 16, 1934, serving four years in the Marine Corps. Burlison went through his basic training in the Headquarters Detachment at the Marine Corps Recruit Depot at Parris Island, South Carolina. As of November 1934, Burlison was stationed in the Marine Barracks at the Naval Yard in Boston, Massachusetts, and remained there through September 1935. By October 1935, he was stationed with the Sea School Detachment at the Marine Barracks of the Norfolk Naval Yard in Portsmouth, Virginia. And just a few months later in January 1936, he was serving as a Private in a Marine Detachment aboard the USS Colorado (BB-45), the lead ship of the Colorado class of battleships, which operated in the Pacific Ocean. In 1937, he served in numerous locations around the world and aboard a number of U.S. ships, including aboard the USS Fairfax (DD-93), a Wickes-class destroyer, which was assigned to the Special Service Squadron out of U.S. Navy stations Coco Solo and Balboa in the Panama Canal Zone in Panama, between January and April 1937 . 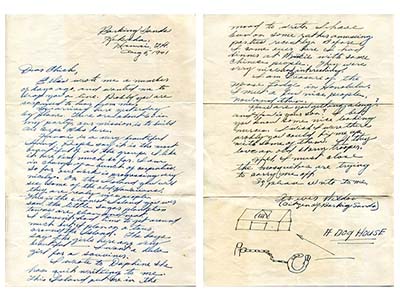 Burlison served as a Marine on numerous American Navy vessels, including as a deck hand on temporary duty aboard the USS Saratoga (CV-3), a Lexington-class aircraft carrier, when it came into port at San Pedro, California, in March 1937, from the Navy’s station at Balboa in Panama. He again was stationed aboard the USS Saratoga when it traveled in April 1937 to Honolulu, Hawaii. Most of his service during this period appears to have been connected to Marine Corps and Navy military maneuvers and mock battle scenarios as part of the Navy’s Fleet Problem exercises, held every year since 1923. In July 1937, Burlison was serving aboard the USS Taylor (DD-94), a Wickes-class destroyer, which prior to its decommission in 1938 was patrolling the Atlantic coastline. By January 1938, Burlison was stationed aboard the USS Henderson (AP-1), a Navy troop transport ship that was involved in resupply troops in China during the 1930s.

The between 1939 and early 1940, Burlison re-enlisted in the U.S. Army Air Corps. From around 1939 to December 1941, he was primarily stationed at Hickam Field in Pearl Harbor, Hawaii where he served in the 22nd Materiel Squadron.

In November 1940, the War Department authorized the construction of housing for 750 men of the 299 Infantry Regiment (Hawaiian National Guard) at Barking Sands, Hawaii. The new construction included barracks, a mess hall, and warehouses as well as necessary water and power supply lines. Burlison was stationed there starting in August 1941, where he and 60 men in his party were assigned the task of constructing new U.S. Army Air Corps barracks for the new Army Air Corps’ Barking Sands Landing Field, a new airfield for bomber plane operations. Burlison was involved in local activities in Honolulu when he was not on duty in the Air Corps, including serving as a treasurer for a Moose Lodge in Honolulu.

Prior to the Japanese attack on Pearl Harbor, Weldon Burlison corresponded with friends and family members, including a childhood friend from Yancey County who was living in Skillman, New Jersey—Elsie M. Edwards. Elsie and her husband Ellis Edwards even visited with Burlison in the late 1930s when he was stationed with the Marine Corps in New Jersey. The Edwards couple wrote to Burlison, and Elsie would even have some of her female friends write to him at his request. Burlison referred in his correspondence to Elsie Edwards as “Chick” or “Chickie,” while she called him “Snook.” 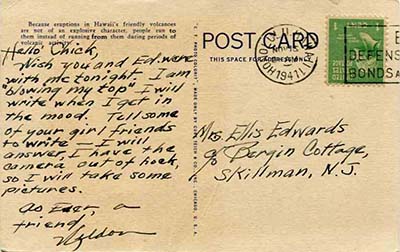 On December 7, 1941, Weldon Burlison was stationed at Hickam Field at Pearl Harbor, Hawaii, the headquarters of the Hawaii Air Force, where 51 American airplanes were on the ground when the Japanese attacked. And a flight of 12 Boeing B-17 Flying Fortress heavy bombers was expected to arrive that morning.  During the attack, Japanese Zero fighters and Val dive-bombers strafed and bombed the flight line and hangars, concentrating on the B-17 bombers, which had arrived unarmed and low on fuel during the attack, with most succeeding in landing at Hickam at which point they were attacked on the ground. The second wave of the Japanese attack struck Hickam at 8:40 A.M. and by 9:45 A.M. the attack was over. Nearly half of the airplanes at Hickam Field had been destroyed or severely damaged. The hangars, the Hawaiian Air Depot, and several base facilities—the fire station, the chapel and the guardhouse—had been hit. The big barracks had been repeatedly strafed and bombed and a portion of the building was on fire. Thirty-five men were killed when a bomb hit the mess hall during breakfast.

A variety of casualty numbers have been reported over the years for the loses at Hickam Field on December 7, 1941. The U.S. Air Force reports that personnel casualties included 139 killed and 303 wounded at Hickam Field. The bombing and strafing of Hickam Field was an important objective for the Japanese. The success of the attack on the U.S. Pacific Fleet at Pearl Harbor was dependent on eliminating air opposition and stopping U.S. planes from following their aircraft back to their carriers and bombing the Japanese military task force.

Letter from a friend back home

On the morning of December 8, 1941, after hearing the news about Pearl Harbor and knowing where Burlison was stationed, Elsie Edward wrote a two-page, heart-breaking letter to him, hoping he is safe and alive. Elsie began her letter by saying “Of course I have a million things on my mind these days. Right now the uppermost thought is ‘I wonder if Snook is safe, if he’s really all right’.” After noting that Americans had abandoned plans for Christmas in order to pray for those military personnel at Pearl Harbor, Edwards wrote, “And let me tell you Weldon, I am one of your many friends who is praying for you!” She would finish writing the letter by 5 focusing on information related to previous correspondence, but finished her letter saying, “I don’t know of very much to say right now. I can’t even be sure you will receive this but I hope you do.”

Within two days of the attack on Pearl Harbor, on Wednesday, December 10, 1941, the U.S. War Department had officially notified Weldon Burlison’s parents of his death. The notice for Burlison’s death was printed on the next day—December 11, 1941—in his hometown newspaper The Yancey Record (Burnsville, North Carolina). It was published with a front-page headline: “Weldon Burleson Is First War Casualty.”

Weldon Burlison was the first reported war casualty for World War II from western North Carolina and one of the first reported North Carolina casualties from the Japanese attack at Pearl Harbor. Sometime during the week following Pearl Harbor, a family member of either Weldon Burlison or Elsie Edwards who lived in Yancey County mailed two newspaper clippings to Elsie in New Jersey to let her know of Burlison’s death. The letter Edwards mailed to Burlison on December 8th would be transferred to multiple military mail locations in the chaos following Pearl Harbor. After the envelope was marked with “Deceased,” the letter was returned to and received by Elsie Edwards on February 12, 1942—a date she wrote on the back of the envelope. Little is known about the Burlison family or the Edwards family following Pearl Harbor.

Weldon C. Burlison died with the rank of Private, but would receive a posthumous promotion to Corporal. He was initially buried in Plot 3, Row S, Grave 62, at the Schofield Barracks on Oahu, Hawaii. After World War II, he was disinterred in 1947, and reburied in the United States Soldiers’ and Airmen’s Home National Cemetery in Washington, D.C., on November 14, 1947. Burlison is buried there in Section L, Grave No. 8153-C.

Over the years—due to misspellings and little available information—Weldon Burlison has often been overlooked as a victim of the Pearl Harbor attack, but not by those in Yancey County, where his name is engraved on the Yancey County Veterans Memorial in Burnsville as “Weldon Burleson.”

Information on Weldon C. Burlison’s U.S. Marine Corps service gathered from a newspaper clipping in the collection, as well as from the following public records:

Thank you so.much for

Thank you so.much for publishing this information. Weldon was my great uncle, my maternal grandmothers brother. We knew all these years he had been in the Army Air Corps and was KIA at Pearl Harbor, but the majority of this information we ha e never seen. We have shared this on social media numerous times.

So glad this article could

So glad this article could help!