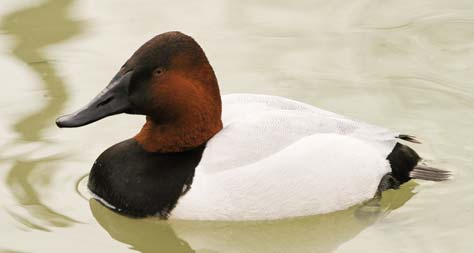 Plant and animal foods including the seeds, buds, leaves, rhizomes, roots and tubers of aquatic plants, invertebrates such as snails and insect larvae, and small clams. 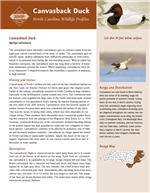 Male is called a drake; female is called a hen. Birds become sexually mature at 1 year. Some yearling hens breed but
not as effectively as adult hens.

Called a duckling. Average clutch size is 7 eggs in nests parasitized by other birds, and 9 eggs in unparasitized nests. Eggs are large and green with a smoothshell. Incubation time ranges from 24-29 days.

Canvasbacks are only found in North America; with the center of its breeding range the prairie-parklands of southern Canada. Canvas -backs do not nest in North Carolina. During early fall, canvasbacks begin migrating south to wintering areas. Canvasback wintering areas are dispersed throughout the country, but the largest concentrations occur along the Atlantic Coast (Chesapeake Bay), the Mississippi River delta in southern Louisiana, and San Francisco and San Pablo Bays, California. Some canvasbacks migrate to North Carolina, but their winter numbers have dropped considerably over the last 15 years. 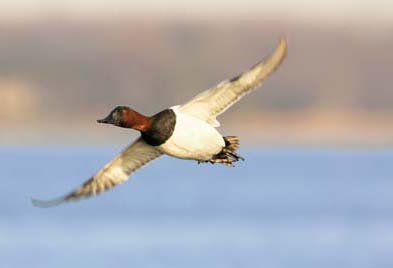 The canvasback duck (hereafter canvasback) gets its common name from the light gray canvas-colored back of the male, or drake. The canvasback gets its specific name, Aythya valisineria from Vallisneria americana, or wild celery, which is its preferred food during the non-breeding season. With its subtle but beautiful coloration, the canvasback duck has long been a favorite of waterfowl
enthusiasts around the nation. When migrating, canvasbacks often fly in an impressive V-shaped formation that resembles a squadron of airplanes at high altitude.

Coastal areas of North Carolina provide some of the best waterfowl habitat on the East Coast (or Atlantic Flyway) for ducks and geese that migrate south. Earlier in the century, canvasbacks wintered in North Carolina in large numbers, especially in the northeastern coastal sounds and rivers. But commercial market hunters, who supplied the large cities of the North with fresh meat, hunted canvasbacks to low population levels during the market-hunting period in the first third of the 20th century. Canvasbacks were the favorite targets of market hunters because their meat was considered the tastiest of any duck. This was the result of eating wild celery, which was then abundant in our coastal waters. Their numbers have rebounded since commercial market hunting was outlawed with the passage of the Migratory Bird Treaty Act in 1918. However, continued destruction of the canvasback’s wetland breeding habitat in the prairie region has kept populations relatively low compared to other duck species. Canvasbacks continue to be affected by pollution, loss of habitat and increased predator numbers. Canvasbacks no longer spend the winter in North Carolina in appreciable numbers, largely the result of the loss of aquatic vegetation like wild celery in our coastal sounds and rivers due to decreases in water quality.

The canvasback’s flight is characterized by rapid wing beats and it is considered one of the fastest of all ducks on the wing. Aside from its coloration, the canvasback is recognizable by its large, wedge-shaped bill and head. The drake canvasback has a chestnut-red head and neck, and black chest highlighted by its light gray back. The hen (female) has a buff-brown head and chest with a brownish-gray back. Immediately after hatching, both sexes have yellow eyes, but after 10 to 12 weeks the eyes begin to turn red. The wings of the hens are brown flecked with white. The males have nearly white wings with brown primary feathers. 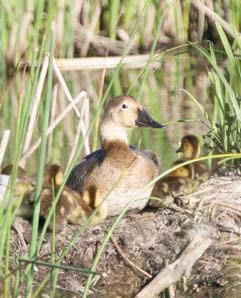 Canvasbacks are one of several species of diving ducks, meaning that they dive and swim underwater to get their food. They often dive to depths of 30 feet. The main breeding area for canvasbacks is the prairie pothole region in the Canadian provinces of Alberta, Saskatchewan and Manitoba, and in states such as North and South Dakota. Nesting typically begins in early May. Hens nest over water in deeper prairie potholes, ponds, and marshes. The nest is a large structure constructed of loosely woven reeds and sedges and lined with down. The success rate of canvasback nests varies from year to year, depending on rainfall and other weather conditions, and also to predation of nests and eggs or the hen, by skunks, raccoons and foxes. Another factor affecting nesting success is the instinct of redhead ducks to lay eggs in canvasback nests. This parasitic behavior has a direct effect on the number of canvasback eggs hatched. During the breeding season, canvasbacks consume both plant and animal foods including the seeds, buds, leaves, rhizomes, roots and tubers of aquatic plants and invertebrates such as snails and insect larvae. Canvasbacks historically wintered in areas of brackish water with abundant food, but today their winter distributions are affected by the availability of natural foods and their ability to exploit these resources. Major concentrations of canvasbacks are found during winter in the Atlantic Flyway in the Chesapeake Bay region of Maryland and Virginia, where water quality has improved and aquatic vegetation has returned. During winter, canvasbacks prefer the buds, rhizomes and tubers of aquatic plants. When these foods are limited, they forage on small clams and snails. Lack of nutritious natural foods can lower the survival of canvasbacks during the cold winter months, or leave the hen in poor condition to breed the following spring.

Canvasback declines during winter in the Atlantic Flyway, including North Carolina, are thought to largely be the result of declines in the occurrence of submersed aquatic vegetation (SAV’s). SAV habitat is dominated by one or more species of underwater plants occurring in isolated patches or extensive meadows in our sounds and rivers. SAV habitat not only provides winter foods for diving ducks like canvasbacks, but provides a home for fish including blue crab, scallops, shrimp and flounder. Our actions, even hundreds of miles from the coast, can damage this habitat. Excess nutrients from fertilizers, sediment from disturbed land, and activities such as
dredging can all impact the occurrence and quality of SAV habitat. North Carolina’s Coastal Habitat Protection Plan was enacted to address the increasing pressures on coastal and marine resources and habitats, including the degradation of water quality and loss of SAV habitat. The main goals of the plan are to improve the effectiveness of existing rules and programs protecting coastal habitats, identify important coastal habitat areas, enhance coastal habitats and protect them from physical impacts, and to enhance and protect water quality. You can help by remembering the importance of wetlands to those species that rely on them for all or part of their annual life cycle. Help protect our wetlands.

Credits:
Produced by the Division of Conservation Education, Cay Cross–Editor.
Illustrated by J.T. Newman. Photos by René Lortier, Steve Maslowski and USF&WS.
The N.C. Wildlife Resources Commission is an Equal Opportunity Employer, and all wildlife programs are administered for the benefit of all North Carolina citizens without prejudice toward age, sex, race, religion or national origin. Violations of this pledge may be reported to the Equal Employment Officer, N.C. Wildlife Resources Commission, 1751 Varsity Dr.,
Raleigh, N.C. 27606. (919) 707-0101.