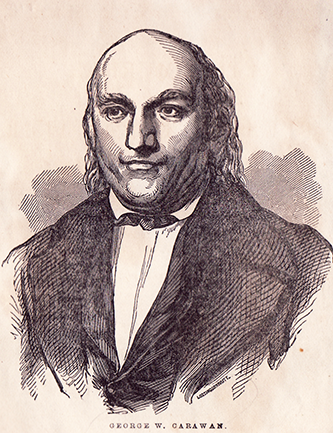 The Reverend George Washington Carawan was a Baptist preacher most known for his notorious murder attempt and suicide in the courtroom upon his guilty conviction for the murder of Clement H. Lassiter.

Born in Swan Quarter, Hyde County, Carawan was one of four children, raised by his single mother following abandonment by his father. His mother was renowned for being a hard worker and instilling her strict nature in her children as well as raising them to be fearful of God. Carawan’s upbringing would play a key role in his mentality as a preacher in his adult life. Before his life in the church, as an adolescent, Carawan made his rebellion against his mother’s teachings and his socially unacceptable atheism known to his entire neighborhood. One of his favorite hobbies growing up was to attend Baptist and Methodist sermons and then mock them for humor to crowds of his own.

He went on to marry Elizabeth Carow at the age of twenty-one. Together they moved to Goose Creek Island in Beaufort County where he spent a few years as a mildly successful farmer. While in Goose Creek Island, Carawan, lived in close proximity to his preacher brother, Green. Accusing Green of attempting to seduce Elizabeth, he angrily moved back to Hyde County. Seven years later Carawan would ask repentance for his sins and publicly convert from his atheistic ways to the Baptist church. He was baptized by Elder Enoch Brickhouse who acknowledged his hopes for Carawan’s future as a preacher. Carawan decided to become a preacher after a vision of Jesus Christ appeared to him with a scroll that held the command for him to preach the word of God. This story was widely accepted by his peers and Carawan thrived in his role as a preacher, building churches in neighboring communities as well as taking over as minister of Goose Creek Island upon the death of his brother Green.

Said to be as charismatic as he was handsome, during his twenty-five years in the church he baptized an estimated 500 men and women. Although he refused any form of salary or payment for his services, he lived lavishly on Rose Bay Farm, was classified as a rich man, and was the owner of a number of slaves. His wife Elizabeth died in 1839, but within three weeks of her death, Carawan married his housekeeper, Mary Bell. It is said that he callously wore the same suit to Elizabeth’s funeral as he did to his wedding to Mary. Even with questionable displays of this nature, the members of his community felt Carawan was extremely virtuous and admirable. He is described as relishing with “boyish charm” the spending of large amounts of money on entertainment for his three sons (the only surviving of his twenty children with both his wives). He was also noted as being exceptionally hospitable, allowing travelers and guests to stay at his home.

One person who did not receive the hospitable treatment the Reverend was renowned for was schoolteacher Clement H. Lassiter. Carawan accused him of being too “familiar” with his wife; an allegation similar to what Carawan had previously accused his brother of. Some reports of the encounter between Lassiter and Carawan differed from the portrayal of Lassiter's reported “friendliness” with Mary Bell Carawan:

Letters were received here, last week, from Hyde, Tyrell and Beaufort Counties, stating that Washington CARROWAN, a citizen of Hyde County, of some fifty years of age, and many years a Baptist Preacher, lately, on some frivolous pretext, knocked his wife down with a chair, and beat her with it until the chair broke to pieces, and then seized a large stick and continued to beat her, until a man named LASSITER, who boarded in the house, interfered to prevent her being murdered. Where upon, Carrowan took his gun to shoot Lassiter, but he disarmed him and left the house. (People’s Press, Vol. II., No. 46. January 1,1853.)

Following the altercation with Lassiter, Carawan reportedly talked freely among his neighbors, expressing his belief that Lassiter deserved to be shot as well as his belief that there was no way that both men could live in the same town. Following Carawan’s utterances against Lassiter, he was met with a lawsuit filed by Lassiter requesting the payment of $2,000 in response to what was labeled as “slander.”

Lassiter was subsequently found murdered. According to an 1853 New York Times article, “Trial and Conviction of a Baptist Minister for Murder – His Suicide,” the following series of events occurred:

He [Lassiter] had finished a school on Rose Bay, and on Monday, the 15th of Nov., 1852, started on foot, with a carpet-bag in his hand to go to the Lake [Mattamuskeet] where he had engaged another school. About 3 o'clock, P.M., he passed Carawan’s house on his way to the Lake. Shortly after he passed, Carawan left his house and went across the field toward the woods which lie between the house and the spot on the road where Lassiter was killed, his wife following with a gun wrapped up in her apron. She returned to the house immediately; Carawan not till sundown. That night he was absent from home. 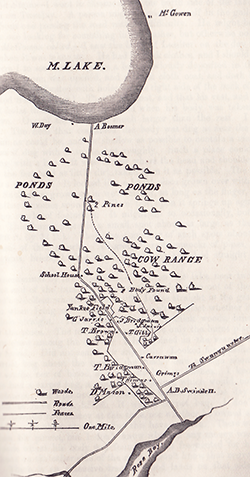 In the account documented in the Washington County Courthouse, the murder occurred without the assistance of Carawan’s wife and happened much more violently. The account claimed that by chance Lassiter happened by the Carawan household where Rev. Carawan saw him and viciously chased him down with his gun. Following the murder, he dragged the dead body a half-mile into the swamp and laid him face down into the mud, hidden in the brush and trees. This account claims Carawan fled the scene as well as the state and was on the way to California. It was also rumored that his previous two wives, (the only instance mentioning two former wives instead of one), were killed by Carawan himself. It wouldn’t be until January that the state of North Carolina would be informed of his whereabouts. Moving to Tennessee and preaching under the name “John Forbes,” Carawan was unable to hide effectively because of his passion for religious speaking.

When Carawan was finally arrested for the murder of Clement H. Lassiter, he made attempts to bribe a witness as well as an African-American man to swear against the prosecution in the courtroom. As written in the New York Times article, “The defense set up for the prisoner was that three of the witnesses (including Sawyer) had sworn falsely, committed willful and deliberate perjury, and that it was impossible for Carawan to have gone through the woods after Lassiter passed his house quick enough to have cut him off.”

At first Carawan told his wife that he believed he would be set free and they would move back to Hyde County. However, he soon realized his fate and asked that his wife and three sons be granted the opportunity to stay the night in jail leading up to his verdict date. According to most sources, Carawan made it clear to his wife as well as his fellow prisoners that he would not be coming back to jail to accept his punishment of being hung. On November 30, 1853, upon the jury’s announcement finding him guilty of the murder of Clement H. Lassiter, Carawan took matters into his own hands:

“…a report of a pistol was heard, followed immediately by another. Carawan had two self-cocking single barrel pistols. With one he aimed at Mr. Warren [counsel for the prosecution]. The ball struck just above his heart and glanced, making but a slight wound. With the other, he shot a hole through his own head. As we are going to press, he lies a corpse in the prisoner's box. As may well be supposed, there is intense excitement in the community.” (People's Press, Vol. III., No. 43. December 10, 1853)

Dimock, Henry?. Trial of the Rev. Geo. W. Carawan, Baptist preacher, for the murder of Clement H. Lassiter, schoolmaster: before the superior court of law of Beaufort County, North Carolina, fall term, 1853: together with a sketch of the murderer's life, and the tragical termination of the trial--his attempt, in presence of the court, to shoot one of the counsel who appeared against him on the trial, and then killing himself, etc., etc. New York: Printed for the proprietor. 1854. http://pds.lib.harvard.edu/pds/view/5808740

Latham, J.F., surveyor. "Map of the Localities Where the Murder Was Committed." Trial of the Rev. Geo. W. Carawan, Baptist preacher, for the murder of Clement H. Lassiter, schoolmaster: before the superior court of law of Beaufort County, North Carolina, fall term, 1853. New York: Printed for the proprietor.1854. 39. Image courtesy the North Carolina Goverment & Heritage Library.