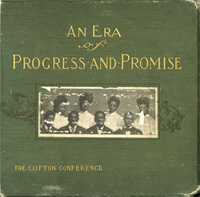 Published in 1910, An Era of Progress and Promise documents topics discussed and explored at the Clifton Conference, held August 18-20, 1908 at the home of W. N. Hartshorn in Clifton, Massachusetts. Conference attendees came from thirty-four African American educational institutions, seventeen states, and nine missionary organizations. The conference explored education, religion, and social status of African Americans in the United States at that time since emancipation. The book contains images and information about a number of educational institutions, including thirty-four institutions in North Carolina. A digital copy of the book was produced in 2009 by the State Library of North Carolina's Government & Heritage Library. It is accessible from the NC Digital Collections.