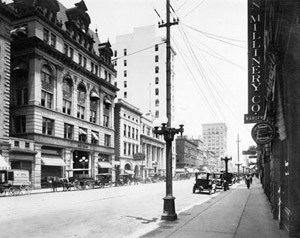 Charlotte is the county seat for Mecklenburg County. Originally home to Native Americans of the Catawba tribe, it was settled by European immigrants about 1750 and established in 1768. The city was named for Queen Charlotte Sophia of Mecklenburg-Strelitz, Germany.

Charlotte was an early supporter of efforts that led to the Revolutionary War.  The Mecklenburg Resolves were signed soon after the battles at Lexington and Concord in 1775.  An earlier, probably spurious Mecklenburg Declaration of Independence--remembered and reconstructed more than 40 years after the fact--provides further evidence of the fervor with which the city espoused the cause of independence.  Charlotte followed through with its rebellion when it resisted the advances of General Charles Cornwallis in August, 1780.

During the Civil War, Charlotte was home to the North Carolina Military Institute, which opened to young men in the fall of 1859. It also served the Confederate cause by manufacturing armaments, naval engines, and other materials in places like the Confederate Naval Yard and the Mecklenburg Gun Factory. 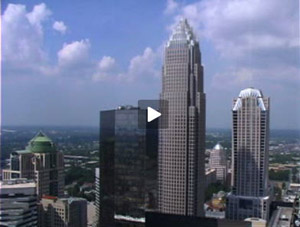 Establishment of the Charlotte & South Carolina Railroad in the mid-nineteenth century increased Charlotte's role in North Carolina's manufacturing industries and allowed local farmers to distribute their goods more widely. Charlotte grew rapidly following the Civil War with the increase in cotton mills, often built near railroad lines. These mills remained integral to Charlotte culture through the 20th century, with several textile trikes in which the National Guard was called in to control workers distraught over poor working conditions.

Other notable events in Charlotte throughout the 20th century include the creation of the first radio station to begin broadcasting in North Carolina: WBT radio, which began in 1922. During the Civil Rights movement of the 1960s and 1970s, Charlotte experienced the same turmoil in race relations along with many other Southern cities, as African Americans staged sit-ins and other protests regarding segregation. Charlotte is also well known for its ties to NASCAR, which has its roots in Florida but maintains a strong presence, and one of its branch offices, in the city.

Charlotte, known informally as the banking capital of the South, can trace its ties to the financial industry to the years after the Revolutionary War when gold was discovered nearby. Mecklenburg county grew to have the largest number of gold mines in the state, which led to the establishment of several mints and a number of banks.