By North Carolina Division of Parks and Recreation, 2015 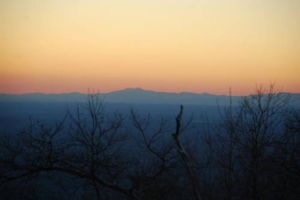 Grandfather Mountain has been an icon in North Carolina’s landscape for generations. This state park opens the mountain’s 2,456-acre backcountry to hiking and backpacking. The park is known for some of the South’s most severe weather and challenging terrain, with trails that have hikers scrambling along cliffs and up ladders.


Grandfather Mountain's stone profile faces have long gazed out over the ancient Appalachians, earning the acclaim of explorers and botanists alike as the apex of the Blue Ridge in grandeur and ecological diversity. Towering nearly a vertical

mile over the Piedmont, Grandfather has been recognized for centuries as a sentinel summit. In 1794, the mountain's dramatic views convinced the Botanist Andre Michaux that he'd climbed "the highest peak in all North America."

From alpine-like vegetation and vistas on the highest peaks, to cascading streams far down in the foothills, more than a dozen distinct ecological zones stretch across the landscape. Seventy-plus species of rare, threatened and endangered plants and animals populate this rugged mountain, making it one of the East's most significant peaks and a United Nations International Biosphere Reserve.

In 2008, agreement was reached for the state parks system to acquire 2,456 acres of Grandfather Mountain to become North Carolina’s newest state park. The property is commonly known as the “backcountry” of the famous travel destination. The acquisition was arranged with the help of The Conservation Fund and The Nature Conservancy, which holds conservation easements on the mountain covering nearly 4,000 acres. The acquisition was financed by the Parks and Recreation and Natural Heritage trust funds. 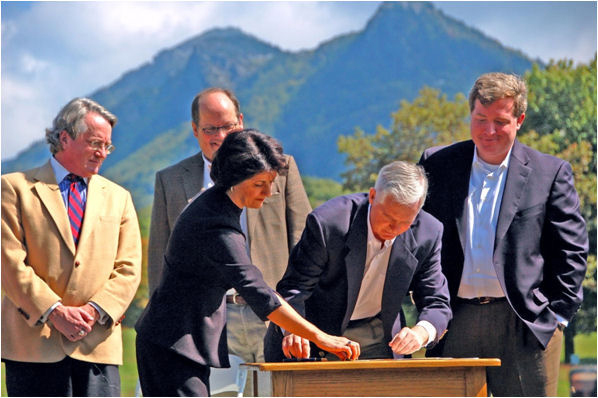 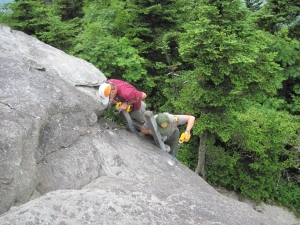 [The most beautiful mountain region of the continent / Season of 1892]. Brochure. ca. 1982. Collection of North Carolina State Parks.

I have not read this, but i