Farming and Agriculture: Working the Fields

This work is licensed under a Creative Commons Attribution 4.0 International License.

Everyone needs to eat! 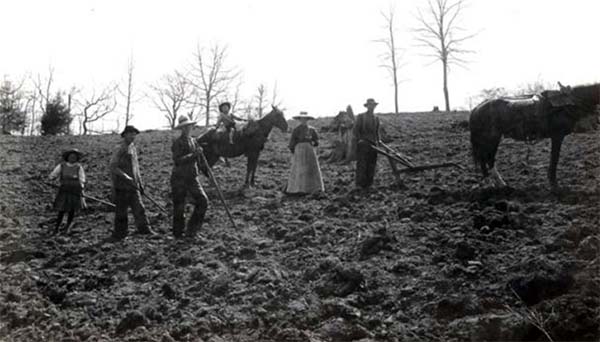 How do you get your food? Does your family go to a grocery store or a farmers market? Have you ever grown your own vegetables? Today in the U.S. most of us get most of our food at grocery stores. And often that food is grown and packaged in other parts of the country or even far across the world. It wasn't always that way for the region's inhabitants. For hundreds of years people had to work to produce or gather their own food to live.

Farming to Survive: life before 1900s

For a long period in our country’s history, most people had to produce their own food. They lived off whatever they could grow, fish, hunt, or gather. We call this subsistence farming. Some people would also trade and barter other goods or services for their food if they didn’t grow their own.

Before Europeans arrived, the region's Indians raised crops and hunted for food. They raised a wide variety of vegetables and grains. You'll recognize many of them -- corn, squash, sunflowers, pumpkins, and beans. Colonial settlers adopted beneficial agricultural practices from Indians along with their crops. And we still rely on these crops today. Corn and tobacco were two of the most important crops for the colonial economy. 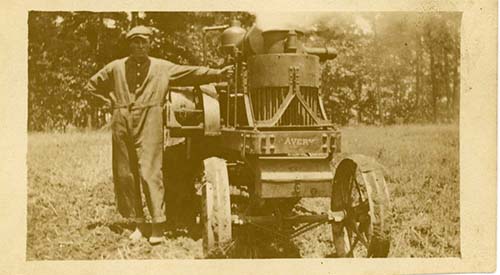 Because people relied on agriculture to survive, we call this an agrarian economy. North Carolina’s economy continued to be agrarian up until the middle of the 1800s. Most people lived off their own small farms. And everyone in the family had to contribute to chores. Even kids had to help plant, harvest and preserve food for the winter. By the 1850s, the economy started to change as farming improved and industries like textile manufacturing developed.

In the 1700s and early 1800s, farm machinery as we know it today didn't exist. Most people farmed by hand with wooden hand tools. If you were prosperous enough to have a horse, mule, or ox, you could till the soil with a wooden plow. Farming was hard and at times uncertain. Insects, weather, fire, and other events could ruin a year’s provisions.

Farming Begins to Improve: Technology and Education in the 1800s

By the 1820s, about one-third of state’s population had moved out of state. Many moved west to states like Tennessee or beyond or further south. And by this time farming crops like cotton had depleted soils, making them poor for farming in some areas. The State Agricultural Society formed in 1818 to help improve farming practices. In 1877 this became the state's Department of Agriculture. The department oversaw farming all over the state to help improve how people farmed. And in 1887 the N.C. College of Agriculture and Mechanic Arts began. Today this is N.C. State University in Raleigh. The college used scientific research and education to improve the way people farm. Across the country other state universities did the same thing. 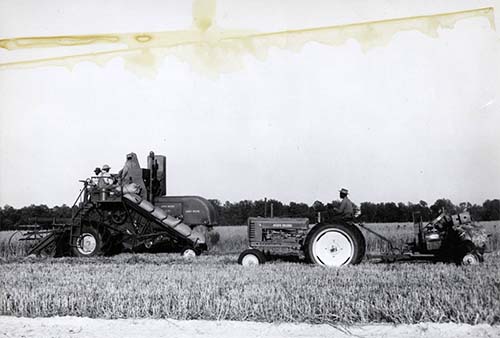 By the end of the 19th century, science and technology had improved farming practices. Soil improved when people understood how to take care of it. Invention of new machinery helped increase efficiency and the amount of crops harvested. The revolution in farm machinery began in the 1830s. You may have heard of names like John Deere and International Harvester. John Deere invented the first steel plow in 1837. And Cyrus McCormick invented the mechanical harvester in the 1830s. He founded the International Harvester company. In the early years horses pulled the new machines. By the 20th century, the combustion engine had been invented and petroleum had been discovered. And from there farm machinery could run on gas, like today's cars and trucks. But in North Carolina, many farmers still had to rely on horses, mules, and oxen to pull farm equipment, even into the 1940s. How do you think engines and technology changed farming? How does farming look today?

Today North Carolina is still considered an agricultural state. From small family farms to people who make a living from the land, farming is a big part of the state’s economy. Some of the state's most important crops are sweet potatoes, soybeans, corn, peanuts, cotton, apples, and Christmas trees.

To learn more about the history of farming and agriculture in North Carolina, visit these NCpedia pages:

Farming and Agriculture in NC: A History of Working in the Field

Agriculture Education Toolkit, from the U.S. Department of Agriculture