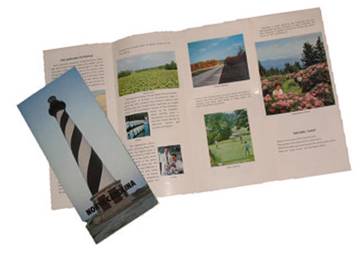 NCpedia has its origins in frequently asked questions (FAQs) about North Carolina history and government that librarians at the State Library would receive over the phone or by patrons visiting the library. 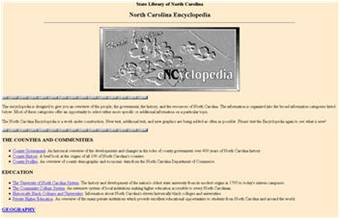 From brochure to electronic encyclopedia

In the 1990s, the World Wide Web provided an ideal opportunity for gathering more North Carolina FAQs, including biographies of its governors, histories of important events and places, information about the state's geography and 100 counties, and more.  And it provided the ideal vehicle for reaching a much larger audience. Librarians at the State Library shifted the content into numerous HTML pages on the library's fledgling web presence and the online encyclopedia of North Carolina was born.  And with it, the brochures ceased to be printed. Staff were no longer limited by space and the content continued to expand as staff received more reference inquiries and and other agency staff made contributions from their research.

In 2004, the online encyclopedia underwent a facelift and received a new logo to more closely incorporate North Carolina's state colors. It was called, somewhat catchilly, "eNCyclopedia".  At this point, the resource included a few hundred static HTML pages. 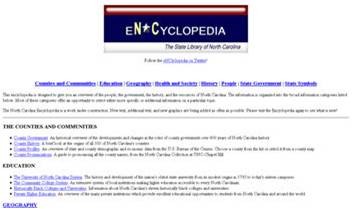 At the same time, the Libary's digital projects effort was created. Requests for scanned copies of resources no longer under copyright began coming in, along with requests for more information about popular topics.  Staff in what was then called the Information Services Branch pulled together these more frequently requested resources and information on popular topics, and these became the State Library's first digital projects.  Topics include information about recipients of the North Carolina Awards winners, and other information that was routinely produced in state agency publications. These projects first appeared in the online encyclopedia.

Birth of NCpedia and re-homing in a content management system

By the late 2000s, the content in the online encyclopedia has grown to several hundred pages, and it was time to transition the resource to a content management system that would allow for growth as well as important usability features like search and browse. In 2009, the content was migrated to a content management system, called Drupal, and went online thanks to a partnership between the State Library and NC LIVE.  And, of course, the encylopedia got an even better name change and the NCpedia was born!  NCpedia left beta on September 1, 2010. 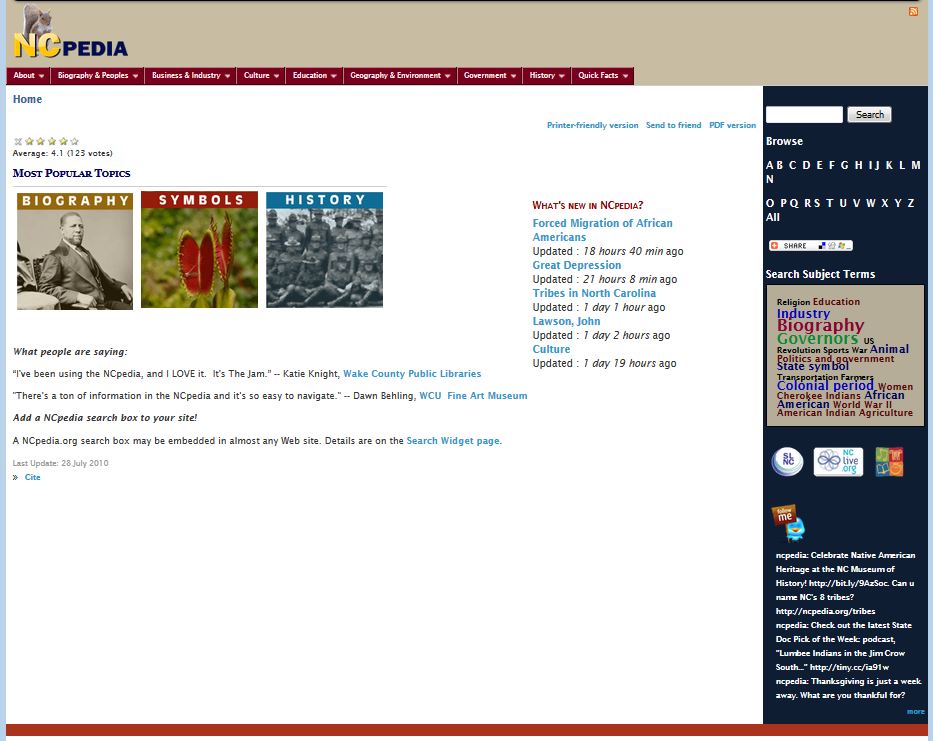 NCpedia has been strengthened and increased by many other content partners and collaborations.  These have included the North Carolina Museum of History's Tar Heel Junior HistorianI magazine, with content written especially for late elementary and middle school students.  Curators and historians at the museum have contributed additional content as well.  NCpedia also has numerous contributions from the University of North Carolina Library's, as well as librarians at other institutions such as North Carolina State University.  Content has come from a wide range of historians and experts in fields such as biology and natural history, geography and anthropology. 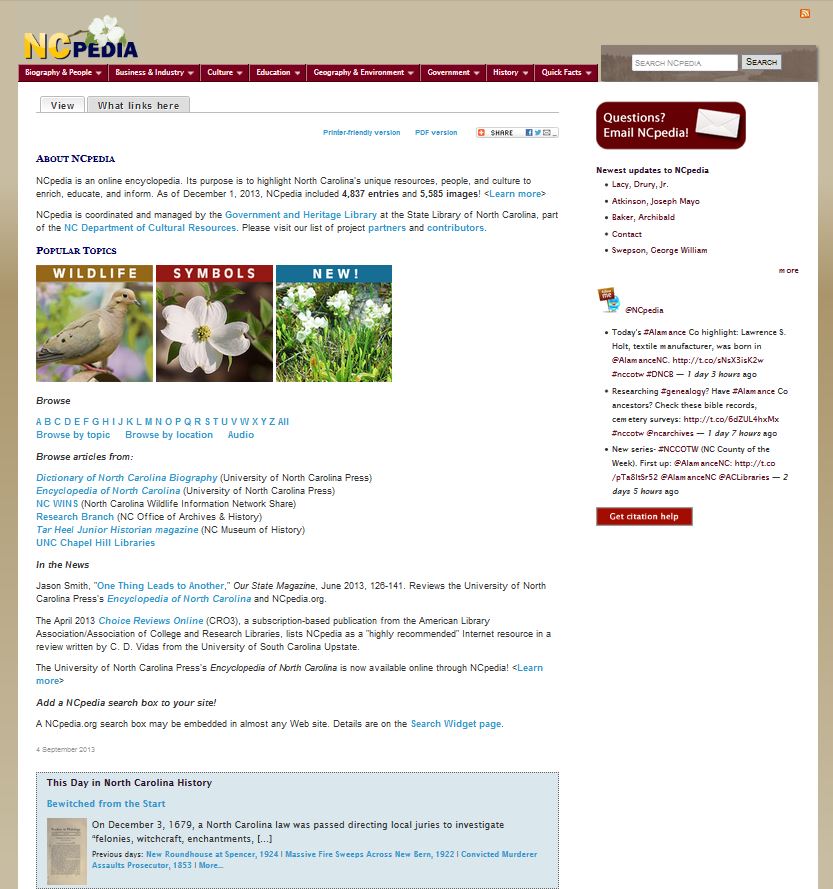 Additional partnerships are being continually formed to add more content, images and media about North Carolina to this expanding resource. If your agency or institution is interested in becoming a partner, contact information for Government & Heritage Library staff may be found at /contact. Individuals who are interested in contributing articles or images to NCpedia may learn more about how to do so at https://ncpedia.org/contribute.

NCpedia left beta on September 1, 2010, and aside from a slight redesign in the summer of 2012 to improve usability on mobile devices, the user interface went largely unchanged until December 2016.

By the fall of 2010, NCpedia included between 900 and 1,000 pages. And at the conclusion of 2014, it included more than 6,800 page, and at that point staff at the State Library knew that a redesign would be just around the corner to accommodate the growth and to upgrade technology for an improved user experience.

In 2015, staff began to plan and design a new user interface, to respond to user needs and to include results from a usability study conducted in 2014.  NCpedia would still have its home in Drupal, but with a new look and feel, more browsing features and graphical elements, and up-to-date responsiveness for mobile devices and tablets. 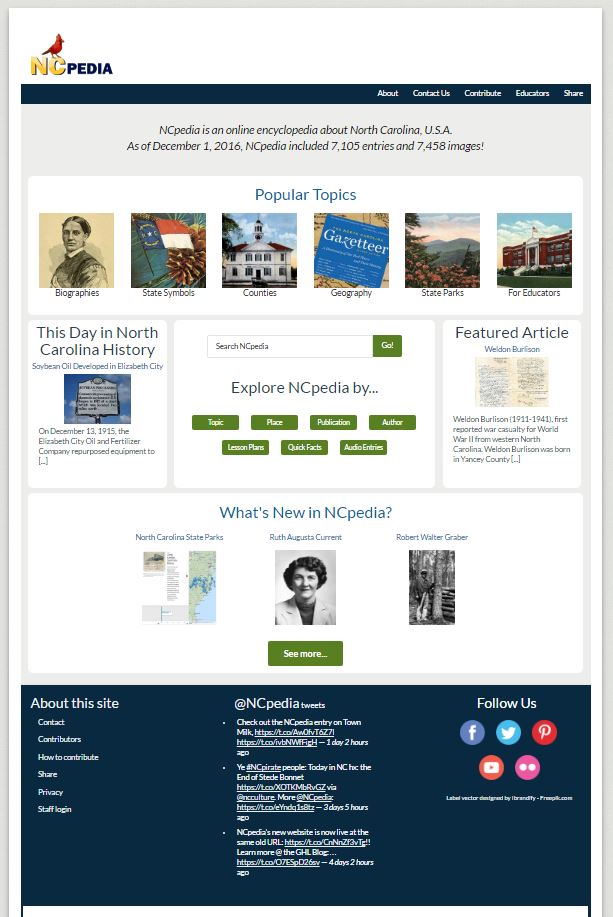 he redesign was about a year in the making, from concept, to design, programming, testing, user feedback and all the rest. The new site went live on December 9, 2016.  Check out the images with this article to get a great visual on these historical changes in a website's development!