Last Days of the Confederacy: Jefferson Davis in Greensboro and Charlotte, April 1865 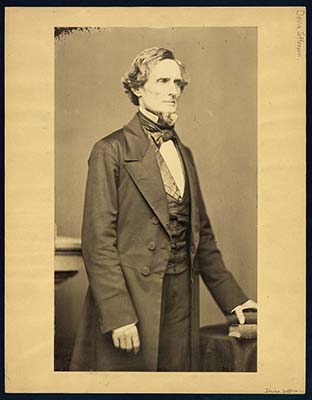 The President of the Confederacy held two meetings of his cabinet, April 12-13, 1865, at the home of J. T. Wood in Greensboro, N.C., which was a few yards north of the intersection of present day South Elm Street and McGee Streets.

As the shades of winter slowly lifted during the early months of 1865, the Confederacy was in its darkest hours. After Richmond fell on April 3, 1865, Jefferson Davis (1808-1889), President of the Confederate States of America, and his advisors fled the city on the railroad headed south. His cabinet included Attorney General George Davis, Secretary of the Treasury George Trenholm, Secretary of State Judah P. Benjamin, and Secretary of War John C. Breckinridge, among others. President Davis and his entourage, watching their government crumble around them, were powerless to stop the collapse. Major General William T. Sherman had devastated Georgia and ransacked the arsenal at Fayetteville. General George Stoneman destroyed the abandoned Confederate prison at Salisbury and conducted cavalry raids throughout western North Carolina. Not safe in Richmond, Davis and his cabinet fled deeper south on a fifteen-day passage through North Carolina.

Arriving by the Piedmont Railroad at Greensboro on April 11, 1865, Davis’s cabinet found a cold reception from residents, due mainly to Richmond’s perceived mismanagement of the war effort. While Davis found quarters with the nephew of his first wife, John Taylor Wood, his advisors were forced to make the “Cabinet Car,” a decrepit wooden boxcar, their mobile boardroom and sleeping quarters. Throughout April 12 and 13, Davis held meetings with his staff and generals Joseph E. Johnston and P. G. T. Beauregard on the feasibility of uniting tattered Confederate forces against the north or sending General Johnston to broker peace with the Union. After the meetings, Davis and his cabinet procured wagons and left Greensboro on April 15. Tennessee cavalry escorted them on the four-day journey to Charlotte. En route, Davis and his party spent the night of April 16, 1865 in a pine grove four miles east of Lexington and the following night, Easter Sunday, at the rectory of St. Luke’s Episcopal Church in Salisbury. Their next stop was at Concord on April 18th, where Judge and Confederate sympathizer Victor C. Barringer offered his residence on North Union Street to Davis and his party.

The next day the group reached Charlotte, where Davis first heard of Lincoln’s assassination while standing at the corner of Tryon and Fourth Streets, as he was about to enter the Lewis F. Bates residence. Contrary to some accounts, Davis is widely believed to have lamented Lincoln’s death, if not for the loss of a worthy adversary, for the rise of Andrew Johnson to the presidency, which Davis regarded as disastrous to the South. The Confederate government met in the Charlotte branch of the Bank of North Carolina from April 19 until April 22. Over that time, Davis also met with Governor Zebulon B. Vance, whose attendance was essential as the troops within North Carolina were the Confederacy’s last hope, despite the Union capture of Raleigh on April 13. The last meetings of the Confederate government occurred at the Phifer House in Charlotte from April 22 through 26.

On April 26, Davis and select members of his cabinet sought passage to South Carolina, hoping eventually to make their way to Florida. Some members of the cabinet left the group, such as George Davis, who returned to his family in New Hanover County. While traveling, the party met with former Attorney General Thomas Bragg and proceeded to Georgia. On May 10, however, Union forces, led by Colonel B. D. Pritchard, raided a makeshift camp near Irwinville, Georgia, where Davis and his entourage spent the night. Union forces captured the Confederate president, despite Davis’s efforts to conceal himself, and led him to be detained at Fort Monroe, Georgia, until his release two years later.

Michael B. Ballard, A Long Shadow: Jefferson Davis and the Final Days of the Confederacy (1986)

Jefferson Davis, The Rise and Fall of the Confederate Government (1881)

My understanding is that

In the last sentence of "Last

That was just it. There was

That was just it. There was no formal surrender by the Government. The individual leaders were taken into custody as they were found. The surrenders were by the various army and garrison commanders and by captains at sea.