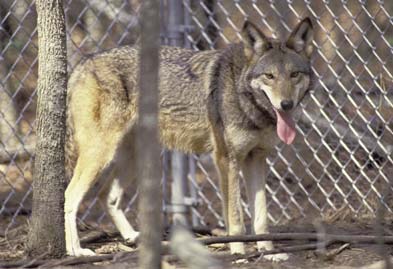 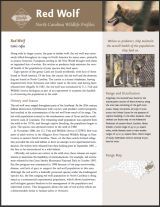 Males and females usually reach sexual maturity between their second and third years and form exclusive pair bonds. Mating usually takes place from January to March. The gestation period is 60 to 63 days.

Young are called pups. One litter per year. Each litter usually contains from 2 to 8 young, though rarely it can contain as many as 12. Each young pup weighs between 13 to 15 ounces.

Rarely beyond 10 years in the wild, but can reach 14 years in captivity. 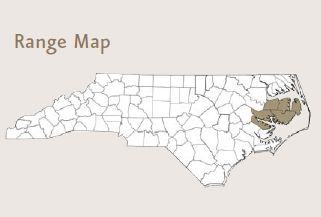 Originally, the red wolf was found in the southeastern section of North America along the area now consisting of the gulf coast states. Today, red wolves are kept in zoos across the United States for the purpose of captive breeding. In the wild, however, these animals are found only on the Albemarle Peninsula of eastern North Carolina. Males inhabit a home range of 45 to 50 square miles, while females tend to have smaller ranges of 25 to 30 square miles. Home ranges of many individuals tend to overlap in productive areas.

Along with its larger cousin, the gray or timber wolf, the red wolf was extensively killed throughout its range in North America for many years, primarily to protect livestock. Europeans settling in the New World brought with them an ingrained fear of wolves. But wolves as predators help maintain the overall health of the populations of prey species they feed upon.

Eight species of the genus Canis are found worldwide, with four of them found in North America. Of the four, the coyote, the red wolf and the domestic dog are found in North Carolina. The coyote is a recent inhabitant, having migrated here from Tennessee and other states to the west, and having been released here illegally. In 1987, the red wolf was introduced by U.S. Fish and Wildlife Service biologists as part of an experiment to examine the feasibility of restoring the population in the wild.

The red wolf once ranged throughout parts of the Southeast. By the 20th century, habitat destruction, hybridization with coyotes, and predator control programs had resulted in the extermination of the red wolf from much of its range. The last wild populations existed on the southeastern coast of Texas and the south - western coast of Louisiana. The remaining small population was captured from the wild in the 1970s, and through captive breeding, the population began to grow. The species was declared extinct in the wild in 1980.

In November 1986, the U.S. Fish and Wildlife Service (USFWS) flew four pairs of adult wolves to the Alligator River National Wildlife Refuge in Dare County in eastern North Carolina. There, on the then newly-formed refuge that provided the size and habitat to favor an attempt at an experimental introduction, the wolves were released from their holding pens in September 1987— the first to be reintroduced to a wild habitat.

Officially, red wolves are extinct in the wild since these releases are experiments to determine the feasibility of reintroductions. For example, red wolves were released in the Great Smoky Mountains National Park in October 1991. But this program was terminated in 1998 because of low pup survivorship, disease, and lack of prey to support the red wolf population in this area. Although the red wolf is a federally protected species under the Endangered Species Act, the free-ranging red wolf population in North Carolina is designated as a nonessential-experimental population, which allows landowners and biologists greater freedom in the management of the population and individual wolves. This designation allows the take of red wolves which are a demonstrable threat to human safety or livestock.

The size of the red wolf falls somewhere between the coyote and the gray wolf. The red wolf is lankier than the gray wolf, and its legs are longer and more slender, enabling it to move about and maneuver easily in its southern habitat. It runs and swims very well and uses its excellent sight, hearing and sense of smell when pursuing prey. Color varies somewhat among red wolves, though it is usually a combination of cinnamon buff or tawny, or cinnamon red, with gray or black on the back and tip of the tail. The red wolf’s undersides vary in color from near white to a pinkish buff. 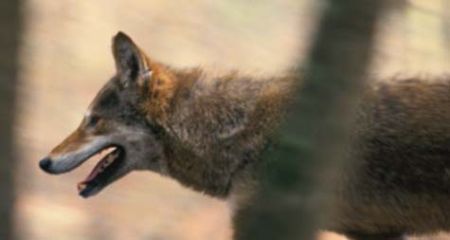 Red wolves inhabit upland and bottomland forests, coastal prairies, swamps and marshes. These animals require dense vegetation to protect denning sites and resting areas. Red Wolf populations declined before the ecology of the species could be established. Therefore, little is known about red wolf behavioral patterns in its original habitat. Study of the current population of red wolves indicates that red wolves do not live in as large social groups (packs) as gray wolves. Red wolves commonly live in groups consisting of a mated pair and the current year’s offspring, with the pack totaling two to eight.

The red wolf is secretive and mostly nocturnal with much of its activity concentrated around dawn, dusk and early evening. During the winter, however, it frequently becomes more diurnal. Hunting is usually centered around a promising area within its larger home range (8 to 30,000 acres), Over the course of a week or two, one or both adults move throughout their home range to find better hunting and to mark their territorial boundaries. During the breeding season, these boundaries are defended against unrelated wolves and coyotes. Dens are found in fallen hollow trees stream banks and sand knoll, either dug by the pair or are abandoned by other animals. Some dens are simple beds tucked beneath dense vegetation.

The red wolf is a shy animal and is rarely seen in the wild. Red wolves appear to be nonaggressive and pose little threat to humans, but they will take an occasional domestic animal as prey. 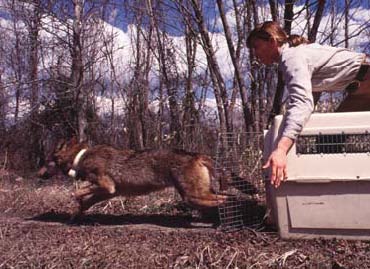 With more than 20% of land in the United States impacted by highways, road-related effects on wildlife are a growing concern, particularly for threatened and endangered species. It is now estimated that wildlife-vehicle collisions are the leading source of human-caused wildlife mortality. Beyond direct mortality, roads can negatively affect wildlife populations through reducing habitat quality, fragmenting habitat and populations, and limiting dispersal.

The North Carolina Department of Transportation (NCDOT) is engaged in a project to widen US Highway 64 from 2 to 4 lanes in Tyrrell and Dare counties. A portion of the constructed highway will impact habitat used by the only wild population of red wolves in North America. To ensure that proper measures are taken to protect red wolves during and after this project, researchers with Virginia Tech and the USFWS will monitor red wolf movements using GPS collars to 1) identify red wolf road crossing areas, 2) determine proper placement of crossing structures that are designed to minimize adverse effects on wolves and 3) evaluate the significance of red wolf habitat changes anticipated from road construction. The goal of this research is to create a highway that provides safe crossing areas for red wolves, and other wildlife, and to minimize impacts on red wolf habitats.

To see a red wolf in action, go to: https://www.youtube.com/watch?v=GXtXouBMvpQ