Have you ever heard about the 1957 ice cream shop protest in Durham, North Carolina? 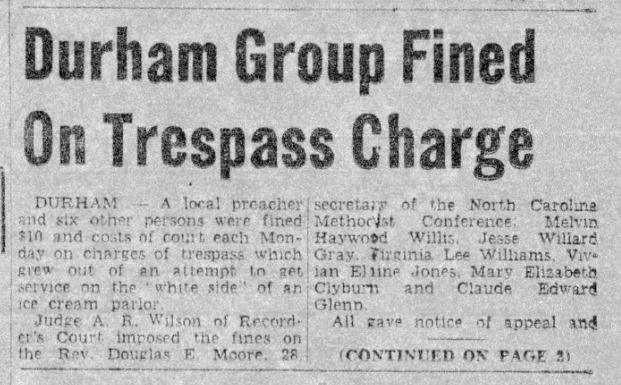 Many know about the 1960 Woolworth civil rights sit-ins in Greensboro, North Carolina. Three years earlier, a group challenged segregation at a local ice cream shop. Their actions lead to a court case that tested the legality of segregated spaces. The Royal Ice Cream Parlor was a very popular spot in Durham. The shop was located near downtown Durham, very close to a black neighborhood. There was one problem: white people could walk in the front door and take a seat inside. People with black skin had to go around to the back and order their ice cream to-go.

Racial segregation in the United States

Segregation means the forced separation of different racial or ethnic groups. There used to be many laws that required segregation. And they permitted discrimination against black Americans. These laws, sometimes called “Jim Crow” laws, created mandatory separation of races. And they affected all aspects of everyday life. They created inferior spaces and services for black Americans. And they created roadblocks to freedom and opportunity. They affected everything from choice in housing and schools to hospitals and restaurants. Black Americans even had to use different public drinking fountains or bathrooms.

People in Durham had been struggling to end segregation in the city for more than 20 years. But progress had been slow. Some people felt things needed to speed up. The Rev. Douglas Moore of the Asbury Temple United Methodist Church felt this way. He was a classmate of Dr. Martin Luther King, Jr. at Boston University. He felt that the church had an important role to play in the national civil rights movement.

So, on June 23, 1957, he took a group of young people from a church class out to Royal Ice Cream. They went in through the back door and took seats at the booths. There were seven in the group, known as the “Royal Seven.” The owner asked them to leave. They refused. Then police arrested them for trespassing.

Their case went to trial, and they were each convicted of trespassing by an all-white jury. They appealed their case to the North Carolina Supreme Court. They lost there too. The court upheld state law that allowed segregated facilities for black people. The Royal Seven appealed their case to the U.S. Supreme Court, but the Supreme Court refused to hear the case. In the end, the protesters paid $433.25 in fines for trespassing. They may not have won their case, but they made an important test of the legality of segregated spaces. And their courage in standing up for their rights as human beings spoke for itself.

People in Durham continued to picket and boycott Royal Cream into the early 1960s. The Royal Ice Cream Parlor was finally integrated in March, 1963, allowing blacks to sit and order in the restaurant. Then in 1964 the Civil Rights Act of 1964 made certain types of discrimination illegal. This included discrimination based on race, color, religion, gender and national origin. It also ended legal segregation in schools, employment and public accommodations.

To see images of pickets and boycotts of the Royal Ice Cream Parlor, visit This Day in North Carolina History