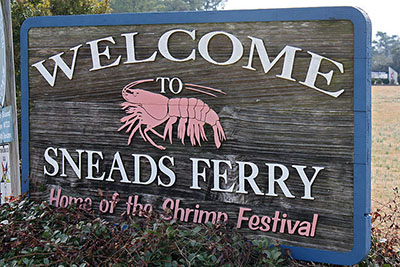 The bill to designate the Sneads Ferry Shrimp Festival as the State Shrimp Festival was sponsored by Senator Harry Brown of Onslow County. The bill recieved widespread bipartisan support, and was signed into law May 3rd, 2011.

About the Sneads Ferry Shrimp Festival

The Sneads Ferry Shrimp Festival began in 1971 to honor the fishing village of Sneads Ferry. It is held every year on the second weekend in August during peak shrimping season. In 1972 the festival committee was incorporated as a non-profit organization. The first Shrimp Ball was also added that year, held the weekend before the festival. The Shrimp Ball is now the largest community dinner and dance of the year.

In 1976 the organization purchased ten acres of land to serve as permanent grounds for the festival.

Today, the two-day festival includes musical entertainment, arts and crafts, and lots of food. Notable events are the parade, the Shrimp Festival Kings and Queens pageant, a shrimp heading contest, a car show, and several military exhibitions. Annual attendance is over 10,000 people.

Whereas, since 1970, the Town of Sneads Ferry has held an annual shrimp festival to bring the community and surrounding areas together in celebration of the Town's coastal and aquacultural heritage; and

Whereas, the Sneads Ferry Shrimp Festival should be adopted as the official shrimp festival of the State of North Carolina; Now, therefore,

SECTION 1. Chapter 145 of the General Statutes is amended by adding a new section to read:

The Sneads Ferry Shrimp Festival is adopted as the official shrimp festival of the State of North Carolina."

SECTION 2. This act is effective when it becomes law. In the General Assembly read three times and ratified this the 2nd day of May, 2011.