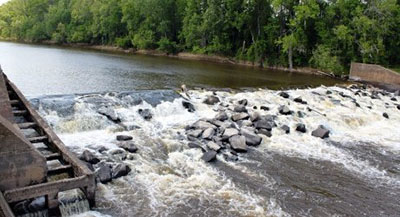 The East Arcadia Blue Monday Shad Fry festival celebrates the shad’s spawning in the Cape Fear river and the beginning of spring.

Blue Monday an Eastern North Carolina term for the day after Easter. According to legend, slaves on Eastern Carolina plantations had to work on Easter Sunday, but they were given Easter Monday off. As this was prime shad season, the slaves would go down to the Cape Fear river banks on Blue Monday and have a fish fry feast.

The modern iteration of the Blue Monday celebrations began around 1950 when Chester Graham, Archie Graham, and Bernard Carter started an annual Easter Monday fish fry on the riverbank for their family. Though it started with just immediate family, it wasn’t long before it was a neighborhood event, and eventually a community event. The celebration became a time when those who had moved out of town would come back to visit family. Today, over 1,000 individuals attend the celebration from more than six different states.

Whereas, the community of East Arcadia has been holding an Annual Shad Fry on the Monday following Easter Sunday for more than 60 years; and

Whereas, this Annual Shad Fry was founded and financed by Bernard Carter, Chester Graham, and Archie Graham around 1950; and

Whereas, Jesse Blanks, Wendell Brown, and Jerry Graham have assumed this position since the 1988 death of Mr. Carter; and

Whereas, this event has been supported by local men such as Teddy Hall, John Leslie Carter, Harry Blanks, Curtis Bowen, Cleo Spaulding, Odell Graham, George Graham, Sr., and Thurman Blanks, who catch, clean, and donate the shad; and

Whereas, this event garners support from the Town of East Arcadia and surrounding communities and hosts visitors from across North Carolina and other states such as Maryland, New Jersey, Connecticut, Texas, and Washington; and

Whereas, this is a day of reunion, remembering, and fellowship for all comers with upward of 1,000 individuals attending during the day; and

Whereas, it is the desire of the community to continue this tradition; Now, therefore,

In the General Assembly read three times and ratified this the 9th day of July, 2013.