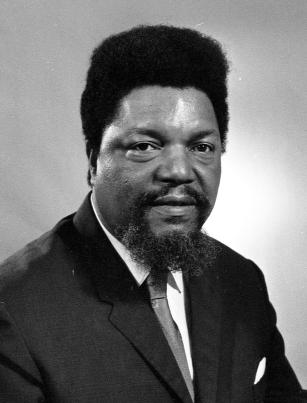 Robert F. Williams was an American militant civil rights leader who served as the president of the Monroe, North Carolina chapter of the NAACP in the 1950s and early 1960s. Williams identified as a Black Nationalist and advocated for armed self-defense in the struggle for civil rights. Although this put him at odds with some of his contemporaries such as Martin Luther King, Jr., his stance allied him with other black activists who advocated for this method of active and at times violent resistance, including Ida B. Wells, W.E.B. Du Bois, and Robert Moton. He is also known for his publication Negroes with Guns (published in 1962). His actions, thinking, and writing on the subject of armed resistance were revolutionary and anticipated and contributed to the Black Power movement that grew in the late 1960s.

Williams was born in Monroe, North Carolina on February 26, 1925 to Emma Carter and John L. Williams. John Williams worked for the railroads. Growing up, his grandparents practiced armed self-defense and he received his first gun as a young boy. When Williams was about eleven years old, he witnessed the violent beating of a black woman on the street in Monroe by a policeman named Jesse Helms, Sr. Helms beat the woman and then dragged her bleeding body along the street to the jail. Helms, Sr. was the father of the future United States Senator, Jesse Helms, Jr.

Along with many other southern blacks who would migrate from the South in search of jobs and a better life, Williams moved north during World War II.  He lived in Detroit for a time, witnessing the labor and racial unrest there. He was drafted to the war effort in 1944 and spent a year in the marines before the war ended. Following the war, he returned home to Monroe. There he married Mabel Ola Robinson, a civil rights activist and the couple had three children. In 1955, he joined the Monroe branch of the National Association for the Advancement of Colored People (NAACP), becoming the branch's' president the following year. Aware of the increasing threat to activists and black citizens, he obtained a charter for a local chapter of the National Rifle Association (NRA). From there he formed the Black Guard, bringing black military veterans into the group. The guard received training and weapons from Williams to help protect and defend Monroe’s black population. Williams taught his wife Mabel to shoot, but in general black women were not taught how to shoot despite their insistence. During that time, the group had open armed conflict with the Ku Klux Klan.

During the fifties and sixties, Williams and other major civil rights advocates such as Bayard Rustin, Martin Luther King, Jr., and A.J. Muste, debated civil disobedience and armed self-defense. Williams claimed that while nonviolence was powerful, its triumph depended on the adversary. King saw the advantages of armed self-defense, but argued nonviolence demanded greater self-control and courage. In the late fifties Williams’ position in the NAACP was suspended for his advocacy of violence. He also butted heads with King on issues of leadership tactics.

In May 1961, Williams sent King a telegram insisting King ride with the Freedom Riders and physically participate with fellow protesters. In August of the same year, the Freedom Riders passed through Monroe, determined to demonstrate the effectiveness of civil disobedience and challenge segregation laws. With hostile white observers gathering, the Riders called for the aid of the Black Guard. Two weeks into their protest in Monroe, a white mob attacked the Riders. During the fighting, a white married couple drove into the chaos. Williams rescued the couple and let them stay at his house. White authorities misread the rescue and charged Williams and others with kid-napping, despite the couple not reporting the alleged abduction after they left Williams’ house.

Facing a kid-napping charge, Williams and his family left Monroe and the country for exile, first traveling to Cuba seeking safety from the Klan. Williams did not stop his activism during his stay in Cuba. During that time, he created and narrated “Radio Free Dixie”, which aired in the U.S. and Canada. The show included jazz, blues, and commentary on the American government. He also wrote Negro with Guns and published a pamphlet, The Crusader. Five years later Williams traveled throughout Asia and Africa speaking out against racism, colonialism, and the Vietnam war. The Williams's returned to Michigan in 1969 where Robert Williams was immediately arrested and extradited to North Carolina to face the kid-napping charge. The case was finally tried in 1975, and Williams was acquitted when the State of North Carolina dropped the charges against him.

Following his return to the U.S., Williams did not take up leadership in the Black Power Movement, despite the movement’s promotion of armed self-defense. He passed away in Michigan on October 15, 1996 from lymphoma. Mabel Williams passed away on April 19, 2014.

Read an excerpt of an interview "Standing Up to the Klan," with Mabel Williams, in NCpedia, from Listening to History, by historian David Cecelski.

A transcript and recording of a longer interview with Mabel Williams by David Cecelski is also available at the Southern Oral History Program at UNC-Chapel Hill.

Left of Black, webcast by the John Hope Franklin Center at Duke University. This site is a repository of resources for teachers. https://sites.duke.edu/leftofblackenrichment/