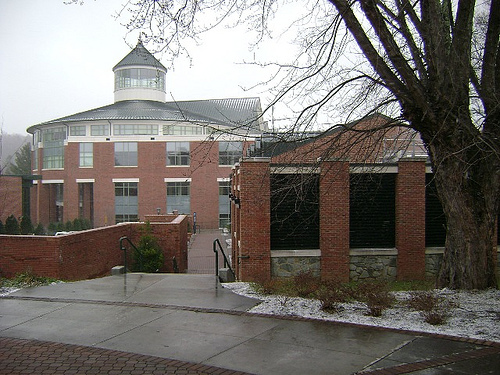 Appalachian State University had its origins as Watauga Academy, which, under the leadership of Dauphin Disco Dougherty and Blanford Barnard Dougherty, opened in Boone in September 1899. Blanford Dougherty, a Watauga County native with an undergraduate degree from Carson Newman College in Tennessee and a degree in philosophy from the University of North Carolina in Chapel Hill, served as principal of the academy and assumed the title of president when the institution changed its name to Appalachian Training School for Teachers.

In spite of initial opposition from the North Carolina educational establishment and General Assembly, Appalachian Training School came under public control in 1903, with the town of Boone beating out Blowing Rock, Globe, Montezuma, and Valle Crucis for the campus. Among the school's early benefactors was Greensboro textile magnate Moses Cone. In 1921 the Training School implemented a two-year curriculum; four years later, in 1925, Appalachian Training School became Appalachian State Normal School. In 1929 the name again changed, this time to Appalachian State Teachers College, and the school began to offer Bachelor of Science degrees in elementary education plus physical education, mathematics, and science on the secondary level.

By the early 2000s Appalachian State's campus comprised approximately 80 buildings on 250 acres, with about 12,000 students (86 percent of whom are from North Carolina) enrolled. The university has approximately 580 full-time and 173 part-time faculty members (88 percent of whom hold doctorates or terminal degrees-the highest percentage in the University of North Carolina System). Students pursue 190 majors in 17 different degree programs, including a doctorate in education. Appalachian State University is a member of the Southern Conference; the school's mascot is the Mountaineer, and 19 varsity sports are offered.