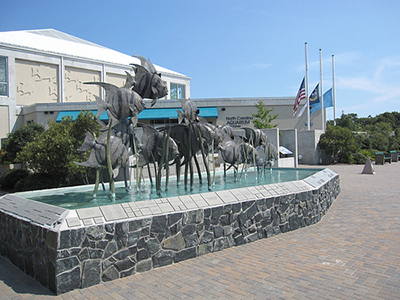 Aquariums owned and operated by the state of North Carolina are found in three locations along the Atlantic Coast. First opened in 1976, primarily as research facilities whose focuses shifted due to public interest, these facilities explore the natural history and marine resources of their respective regions. The North Carolina Aquarium at Fort Fisher is the southernmost aquarium, and its exhibits explain the diverse aquatic life in the vicinity of Cape Fear and Frying Pan Shoals. The North Carolina Aquarium at Pine Knoll Shores is located in Carteret County and houses exhibits depicting aquatic life in the waters of the central coast in the vicinity of Bogue Banks and Cape Lookout. The North Carolina Aquarium at Roanoke Island stands on the shores of Croatan Sound and features exhibits depicting the aquatic life of the coast, sounds, and estuaries of the Outer Banks and the northeastern portion of the state.

Major expansion of the North Carolina aquariums was undertaken beginning in the late 1990s, through a $53 million program-financed primarily by state funds, but with $6 million coming from the North Carolina Aquarium Society-that more than doubled their size and expanded displays, exhibits, and educational programs. In 2000, the Roanoke Island facility reopened after two years of construction as a 68,000-square-foot facility on 14 acres, complete with a nature trail, shoreline boardwalk with observation decks, and outdoor exhibits. Beginning at the Alligator River, exhibits focus on the fresh- and saltwater marshes of northeastern North Carolina and the offshore waters of the Gulf Stream, including a look at the Great Dismal Swamp. The centerpiece of the new facility is a 285,000-gallon ocean tank that includes a re-creation of the wreckage of the Civil War ironclad the USS Monitor, along with large sharks, sea turtles, spadefish, cobia, drum, and groupers.

The North Carolina Aquarium at Fort Fisher reopened as an 84,000-square-foot facility in 2002 after more than two years and $17.5 million worth of construction. Featured is a 235,000-gallon, two-story, Cape Fear Shoals Open Ocean Tank with multilevel viewing, complete with large sharks, barracudas, loggerhead turtles, colorful tropical fish, and other sea creatures swimming around re-created Cape Fear rock ledges. (Before renovation, the largest aquarium at Fort Fisher was 17,000 gallons.) In all, the facility's varied exhibit areas opened with 250 species and 2,500 specimens of animal and plant life. Its 24 acres also features a marsh area and nature trail.

Pine Knoll Shores originally housed the largest of the state's aquariums, 35,000 square feet located in 298 acres of maritime forest in the Theodore Roosevelt Natural Area, including a marsh area and two nature trails. The aquarium was closed in 2004 for renovations and was scheduled for reopening in 2006. The new facility will be three times larger and feature a 306,000-gallon ocean tank and many new exhibits.