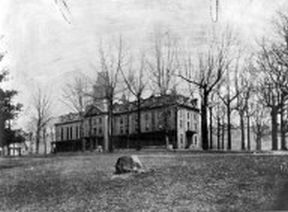 Asheville Female College was one of the first educational institutions established in western North Carolina. During several decades in the nineteenth century it was considered an advanced school, endeavoring "to instruct young ladies in the languages and the arts so that they may be able to perform more fully their duties in circles of refinement and culture." At its peak, the college had an enrollment of more than 300 students and attracted young women from 23 different states.

The school's early history is not well documented, but it is believed to have been the outgrowth of a seminary for young ladies founded in 1835 by Samuel Dickson, a Presbyterian minister. Later school catalogs date the establishment of Asheville Female College to 1842, which is the year the school came under the direction of the Holston Conference of the Methodist Church. The school was incorporated as the Holston Conference Female College in February 1855 and operated under the direction of the Reverend Anson W. Cummings.

The college was forced to close during the Civil War, but it was reopened in 1866 by James S. Kennedy. Financial problems ensued, and the community grew concerned that "the property [might] pass into private hands and be appropriated to other purposes than that of Female Education." In March 1869 a joint stock company was incorporated as Asheville Female College to buy out the financially strapped Holston Conference Female College. James Atkins was appointed president of the college in 1879 and supervised the construction of a new building, completed in 1888. Atkins left the school in 1889 but returned in 1893 for three more years.

In 1896 the school was purchased by Archibald M. Jones and operated as the Asheville College for Girls and Young Women until it closed permanently in 1901. The college building, on Oak Street between Woodfin and College Streets, was sold to the city of Asheville in 1907 for use as a high school.

I grew up down from this site

I grew up down from this site and remember being told about this school as my g/grandma attended. There is still a historical sign showing it. Thanks!