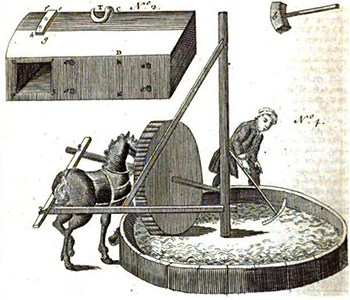 Bark, generally from oak trees, was an unusual export to Great Britain from the forests of the Carolina-Virginia backcountry in the eighteenth century. As new regions were inhabited, bark from numerous felled oak trees became valuable as a source of tannic acid used in tanning the large number of deerskins and other pelts being shipped to England at that time. Edward Moseley's 1738 map of North Carolina included bark as one of the colony's significant products.

Stripping bark from logs, however, appears to have been a lengthy process. The Virginia Gazette of 18 Dec. 1766 referred to bark mills and bark pits in Edenton, as well as to bark houses where the bark was stored prior to local use or shipment. Thomas Hart of Hillsborough advertised in 1779 that he had for sale "a Tan yard with three or four hundred hides now in tan bark-houses &c." In June 1781 George Hartmann of Salem went to Salisbury to haul bark, presumably for use in the tannery operated by the Moravians.