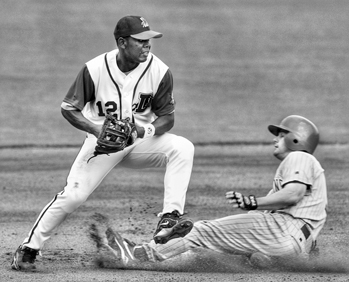 Professional minor leagues became a fixture in North Carolina, with more than 70 cities and towns hosting a team at one time or another, a total surpassed only by Texas. The Piedmont League (1920-55) and the Carolina League, started in 1945, are among the more successful North Carolina-based minor leagues. Durham attorney William G. Bramham was president of the National Association of Professional Baseball Leagues, the governing body of the minor leagues, from 1932 to 1946. During this period the association was headquartered in Durham.

North Carolina is the birthplace of about 300 major league baseball players, including six members of the Sport's Hall of Fame: Luke Appling (High Point), Rick Ferrell (Durham), Jim "Catfish" Hunter (Hertford), Buck Leonard (Rocky Mount), Enos Slaughter (Roxboro), and Hoyt Wilhelm (Huntersville). Leonard played in the Negro Leagues during the period when organized baseball was racially segregated. Although the Negro Leagues did not have an extensive minor league system, some North Carolina cities did have black minor league teams. North Carolina's minor leagues were integrated in the 1950s, as were most of the state's college and high school teams in the next decade.

Minor league baseball in the state experienced a boom during the 1980s, when the Durham Bulls received national attention by way of the hit movie Bull Durham (1988), starring Kevin Costner, Susan Sarandon, and Tim Robbins. In 1998, after 45 seasons in the Carolina League, the Bulls joined the International League as a Class-AAA affiliate of the Tampa Bay Devil Rays. By the early 2000s the state was home to 9 minor league teams, a far cry from the 49 teams that operated in 1949. In addition to the Bulls, North Carolina's minor league teams were the Asheville Tourists (Class-a, Colorado Rockies), the Winston-Salem Dash (formerly the Warthogs) (Class-a, Chicago White Sox), the Greensboro Grasshoppers (Class-a, Florida Marlins), the Burlington Royals (formerly the Burlington Indians (rookie team, Cleveland Indians), the Kannapolis Intimidators (Class-a, Chicago White Sox), the Charlotte Knights (Class-AAA, Chicago White Sox), the Kinston Indians (Class-a, Cleveland Indians), and the Carolina Mudcats (Class-AA, Florida Marlins).

Youth baseball leagues continue to thrive in North Carolina, and college baseball remains a popular sport, although not at the level of college basketball and football. Adult recreational baseball has been largely superseded by the more accessible sport of slow-pitch softball.

Jim Sumner, A History of Sports in North Carolina (1990).