Part ii: The Southern Conference, Everett Case, and the Rise of the "Big Four"

While the game spread quickly at all levels throughout North Carolina, it was the remarkable popularity of college basketball that came to define the history of the sport in the state. In the early years, games were generally played between local schools, but in the 1910s and 1920s North Carolina teams also competed against teams from Tennessee, Virginia, South Carolina, and Georgia. The first significant effort to organize competition between college teams came when the Southern Conference was founded in 1921 with 14 charter members, including the University of North Carolina and North Carolina State College. UNC was the winner of the first Southern Conference Tournament in 1922, led by Cartwright Carmichael, the university's first All-American athlete in any sport (1923). With the realignment of the Southern Conference in the 1930s, intrastate rivalries among basketball teams increased as Davidson College and Wake Forest College joined the league.

There was no formal national tournament or championship in these early years of the game, but the press often recognized national champions based on the results of games between top regional teams. The University of North Carolina's 1924 team, led by Carmichael and fellow All-American Jack Cobb, won all 26 of its games and was voted national champion by the Helms Athletic Foundation. In 1926 Cobb went on to become the first national player of the year to play for a North Carolina college or university.

Duke University moved to elevate the profile of its sports programs by joining the Southern Conference in 1928. In that year Eddie Cameron became the school's head basketball coach, and he went on to establish the program as an annual front-runner in the league, delivering its first conference championship in 1938. Cameron coached at Duke for 14 years before becoming athletic director at the school. Legend has it that Cameron drew up plans for the university's indoor basketball stadium on the cover of a matchbook in 1935; the stadium was rededicated in Cameron's name in 1972. As the home of the "Cameron Crazies," as Duke's enthusiastic student fans are popularly known, Cameron Indoor Stadium is now regarded as one of the most exciting venues to watch any sport, collegiate or professional, in the nation. 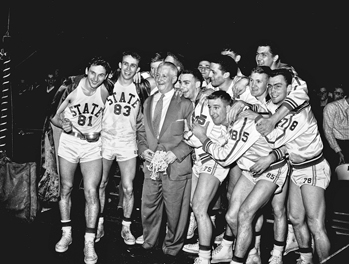 In 1946 two significant events marked the start of a transition for the sport in North Carolina. First, UNC finished second in the 1946 National Collegiate Athletic Association (NCAA) tournament. Horace "Bones" McKinney, a schoolboy star from Durham who began his college days at North Carolina State before transferring to Chapel Hill, was a key player on that team; he went on to become a successful coach at Wake Forest College in the 1950s and 1960s, as well as one of the most colorful basketball personalities in the state. Also in 1946, North Carolina State hired Everett Case, an Indiana high school coach, as its head coach. At the time, North Carolina State's program lagged behind Duke, UNC, and Wake Forest, but Case quickly changed the tone in Raleigh, and with it, the place of the sport in the state.

Case was known for meticulous game preparation, fast-paced tempo on offense, and high-pressure defense, and his teams quickly established dominance over archrival UNC, including 15 consecutive wins in a six-year span during the late 1940s and early 1950s. More important, Case recognized that if he wanted to lure the best athletes to his program year after year, he would have to change the way the sport and the college were perceived. He spoke freely with the media and relentlessly sold himself and his team to the general public, making a show of such things as pregame player introductions and encouraging previously unknown traditions such as cutting down the basketball nets after big wins. Case also insisted that North Carolina State build a new arena that would showcase the program. When Reynolds Coliseum was completed in 1949, it seated more than 12,400 fans-by far the most of any venue in the state or region-and regularly boasted attendance figures greater than those at Madison Square Garden in New York City. With the opening of the new arena, one prominent local sports editor opined that Raleigh had become "the basketball capital of the world."

With the new venue for his program complete, Case spearheaded the creation of a new tournament, the Dixie Classic, to be held at Reynolds Coliseum each December. The single-elimination tournament featured the state's "Big Four" Southern Conference teams-Duke, UNC, Wake Forest, and North Carolina State-against four of the best teams in the country. The tournament, which was played for 12 years before being canceled in the wake of a point-shaving scandal, proved enormously popular not just with students and alumni around the state but with the general public, who followed games on statewide radio. Closely fought games not only cemented rivalries among the Big Four schools but also raised the national profile of the teams, elevating them to a level above other Southern Conference programs and putting them on par with contemporary national powerhouses such as Kansas, Kentucky, and Indiana.