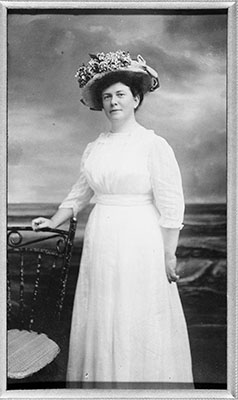 Fanny Yarborough Bickett was the first of the first ladies to have a profession outside of the home. She was also among the most formally educated. Fanny Bickett had long been active in social work before her husband became governor, and she continued actively in that profession until her death in 1941. She was a pioneer in the days before public assistance and through her lobbying efforts and political influence was instrumental in the development of the welfare system in North Carolina. Governor Thomas Walter Bickett was interested in the welfare of his constituents as well, perhaps to the credit of his wife. During his administration many social reforms, including establishment of juvenile courts, stricter regulations regarding hiring of minors, better treatment of prisoners, and increased public health services, were implemented.

Fanny Yarborough was born October 11, 1870, at Rose Hill, the family home in Franklin County. Her mother, Lucy (Lula) Massenburg Davis Yarborough, died when she was only three. Her father, Colonel William Henry Yarborough (CSA), and an aunt, Fannie Yarborough Neal, of Louisburg, reared her. First educated by a private governess, then at Louisburg College, she graduated from St. Mary's in Raleigh in 1889. She then studied for two years at the University of Chicago and took special work at Harvard University. At various times, she studied at the University of North Carolina in Chapel Hill. Following her hus­band's death, she attended law school at Wake Forest College and eventually passed the North Carolina State Bar, receiving a license to practice law at the age of sixty.

Early in the Bickett administration, architect James Salter conducted a complete inspection of the Executive Mansion. Fanny Bickett supported Salter's suggestions to improve the building and forwarded them to the General Assembly's Joint Committee on Public Buildings and Grounds. Salter's original estimate of $65,000 failed to pass the General Assembly; but a substitute measure enacted in March 1917 granted $4,000 for the project, and a subsequent allocation in 1919 gained another $4,000 for continued refurbishment. In 1920 the second-floor ballroom was converted into a bedroom, bath, closets, and a corridor that connected other family bedrooms. 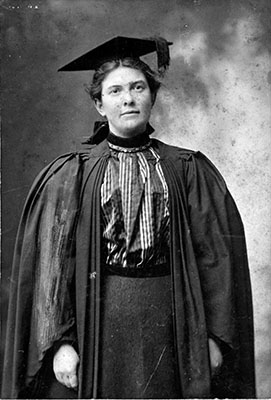 Fanny Bickett purchased dining-room furniture, a four-poster bed for the guest room, and the elaborate console table with mirror in the Grand Hallway.

When the Bicketts moved into the mansion, Fanny Bickett brought along her own household staff from Louisburg, including Nancy, the family cook. Family members said that cooking was not among Fanny Bickett's many talents; some doubted that she could turn on the stove. Nancy did all the cooking while the Bicketts occupied the mansion. During World War I Fanny Bickett promoted home gardens across the state to aid in the war effort. Those efforts included her own victory garden at the Executive Mansion. In 1918 the first lady went to France to visit American troops as a representative of the YMCA. Throughout the war she provided housing in the Executive Mansion for soldiers passing through Raleigh. As many as sixty cots remained set up in the second-floor Ballroom to provide a place of rest for those men. In 1920 Fanny Bickett and her husband, along with suffrage leaders, appeared before a joint session of the legislature in support of women's suffrage.

Less than a year after completing his term as governor, Thomas Walter Bickett died on December 28, 1921. Soon thereafter, Fanny Bickett became head of the Infant and Maternal Welfare Bureau of the State Department of Health. She served in that capacity until 1924, when she became the superintendent of public welfare for Wake County. At that time, little or no money was funneled into welfare programs, and she had to depend on her own inge­nuity to aid as many people as possible.

In 1937 the North Carolina General Assembly enacted two laws relating to the federal Social Security Act of 1935; the laws dealt with how public welfare was to be administered in the state. A burgeoning program developed. Fanny Bickett's office grew from herself and one secretary to twenty-four people. Known for her evenhanded racial policy, she hired several African Americans for both professional and clerical positions in the office. She was known as well for her effective handling of cases and staff and for her unyielding profession­alism. Helping people was Fanny Bickett's first love, and she felt much compassion for her clients on the welfare rolls.

In 1929 Governor O. Max Gardner appointed Fanny Bickett president of the North Carolina Railroad Company; she was the first woman to serve in that post, which carried with it an annual salary of twelve hundred dollars and entitled her to free railroad travel through­ out the nation. The duties were largely ceremonial and involved attending two meetings of the board of directors each year. 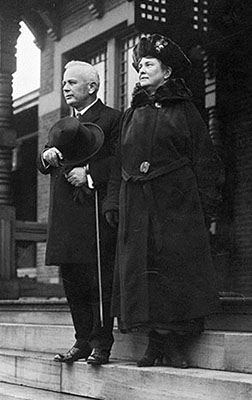 Fanny Bickett was also a member of the board of the North Carolina School for the Blind and was instrumental in devel­oping the juvenile court system in Wake County. She worked with the U.S. Training Corps, an organization established by the War Department in 1918 to improve the physical condition of women working in offices and in war-related capacities. She was commandant of the Southeastern District of the Training Corps, serving sev­eral summers at a camp near Asheville. She was a national officer in the Colonial Dames of America and was also an active member of the United Daughters of the Confederacy and the Daughters of the American Revolution. She was actively involved in the YMCA and YWCA, especially during World War I. A lifelong Episcopalian, she was also involved with the work of Christ Church in Raleigh.

Thomas Walter Bickett and Fanny Neal Yarborough were married on November 29, 1898, in Franklin County. They met in Louisburg, seat of Franklin County, where Mr. Bickett was a young country lawyer. She was from a prominent, well-to-do Franklin County family, and Mr. Bickett was from Monroe, where his father was a physician. His mother was Mary Covington Bickett, sister of United States senator David Covington. Thomas Bickett graduated from Wake Forest College and taught school in Winston-Salem, then practiced law in Stokes County for a brief time before relocating his practice to Louisburg. The Bicketts had three children, but only one, a son, William Yarborough Bickett, born August 30, 1899, survived infancy. A second son, Thomas Walter Jr., was born October 7, 1901, and died in 1902. A daughter, Mary Covington, was born June 8, 1903, and died in 1904. The loss of two children affected Fanny Bickett for the rest of her life and perhaps guided her interest in child welfare. William Yarborough Bickett, a superior court judge, and his family lived with Fanny Bickett during the last twenty years of her life. In her later years, she took up the hobby of knitting for relaxation. She dabbled in oils and crayon and especially loved painting mountain scenes. She never slept well and, being an avid reader, often took four or five books to bed with her, reading half of them before morning. Among her personal pleasures was enjoying the company of her grandchildren, William’s three daughters Frances Yarborough, Cecile Meetze, and Caroline Pinckney.

Fanny Yarborough Bickett died at Rex Hospital in Raleigh on July 2, 1941, following a heart attack. Her funeral was held at her beloved Christ Episcopal Church, where her passing was mourned by the entire city of Raleigh. She was buried beside Governor Bickett at Oak Lawn Memorial Cemetery in Louisburg.