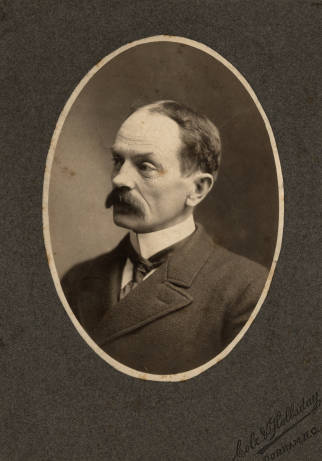 Eben Alexander, teacher, administrator, and diplomat, was born in Knoxville, Tenn., son of Ebenezer and Margaret McClung Alexander. His father was judge of the second circuit of Tennessee, and his grandfather, Adam Rankin Alexander, had been a member of the United States House of Representatives, from 1823 to 1827. Eben Alexander entered Yale in 1869 after preparatory work at East Tennessee University, later the University of Tennessee. At Yale he distinguished himself through membership in Psi Upsilon, Skull and Bones, and Phi Beta Kappa. After graduation in 1873 he accepted a position as instructor in ancient languages at East Tennessee. In 1874 he married Marion Howard-Smith, with whom he later had two sons, Eben and John Howard, and two daughters, Eleanor and Margaret McClung. During thirteen years on the faculty Alexander acquired teaching and administrative experience as professor of Greek, president of the Tennessee State Teachers' Association, and chairman of the faculty when the institution was without a president in 1885–86. Maryville College conferred the Ph.D. degree upon him in 1886.

Although Alexander was considered for the post of president of East Tennessee, he was not selected, most probably because of his reluctance to go along with a movement to de-emphasize the classics. After some resulting controversy, he resigned from the faculty of East Tennessee, accepted a professorship of Greek at The University of North Carolina, and moved to Chapel Hill in 1886. In his first six years there he continued to show a strong interest in teaching, evidence of which may be seen in several articles in the North Carolina Teacher between 1889 and 1892, as well as in comments, written with George T. Winston, in the "Classical Department" of that journal. In 1893 the university conferred upon Alexander the degree of LL.D.

Also in 1893 Grover Cleveland appointed Alexander minister to Greece, Romania, and Serbia. During his term of service the Olympic Games were revived (in 1896), and according to Harper's Weekly (28 Sept. 1895), the first contribution was from Alexander. While in Athens he became good friends with Stephen and Cora Crane, both of whom were war correspondents in the Greco-Turkish War. Crane's novel Active Service was dedicated to Alexander.

Upon his return to Chapel Hill in 1897, Alexander was asked to take an active role in the administration of the university. He was named dean of the faculty in 1900 by President Venable and became chief administrative officer of the College of Liberal Arts and graduate studies, as well as supervisor of the library. He helped to establish the Order of the Golden Fleece (1903), a chapter of Phi Beta Kappa (1904), and Studies in Philology (1906), the official journal of the Philological Club, of which he was a charter member (1893). He also participated significantly in the effort to obtain a $50,000 (later $55,000) grant from Andrew Carnegie to build a library (1905).

Because of poor health Alexander was forced to take a leave of absence in 1909; in the following year he died in Knoxville, Tenn.

Eben Alexander has been credited with making a contribution to the development of the modern Olympics which were launched in Athens, Greece in 1896. The September 28, 1895 volume of Harper's Weekly reported that the games would cost somewhere between 300,000 and 600,000 French francs and that Alexander, then U.S. Minister to Greece had made the first subscription (i.e. money contribution to the fund). Harper's wrote: "The first subscription that reached the committee's hands was not from a born Greek, but from Mr. E. Alexander, United States Minister to Greece, who nevertheless is looked upon and claimed in Athens as a true Hellene, both by his wide acquaintance with the Greek language and literature and his whole-hearted sympathy with the country and its people."