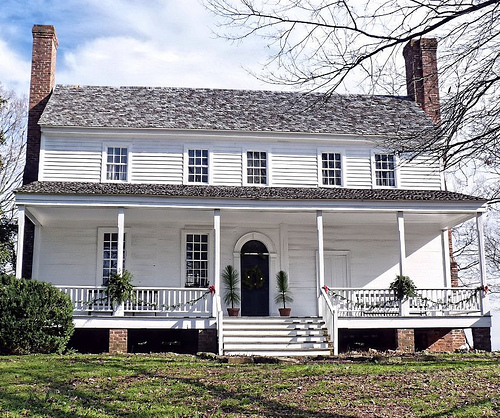 Philip Alston, revolutionary patriot, was born in Halifax County, the son of Joseph John Alston and his first wife, Elisabeth Chancy. In 1772 he bought four thousand acres of land in a horseshoe-shaped bend in the Deep River in Cumberland (later Moore) County. He moved to this tract and is thought to have built the fine colonial house, called "The House in the Horseshoe," yet standing there. Alston began to purchase more land and by 1777 appeared on the tax lists with sixty-five hundred acres. He achieved prominence in his new home; with the onset of the Revolution in 1775, he was appointed second major of the Cumberland Militia. In 1776 he was appointed a justice of the county court and promoted to lieutenant colonel of the militia. Elected to the House of Commons as a representative from Cumberland in the fall of 1777, Alston was granted a leave of absence in December to give full time to military affairs. In 1778, after controversy, he was promoted to colonel. Little is known of his actual military service, but in March of 1779 General John Ashe reported that Colonel Alston had been taken prisoner at Briar Creek in Georgia. On his release he was involved in local skirmishes with David Fanning, the notorious Tory marauder of nearby Chatham County. Tradition says that, in 1781, Fanning trapped Alston in his home. As Fanning began setting fire to the house, Mrs. Alston emerged with a flag of truce and her husband was led away captive.

With the formation of Moore County in 1784, Philip Alston was appointed justice and became the first clerk of court. Having been elected to the state senate, he resigned the clerkship on 23 Feb. 1785, "promising that George Glascock should act as deputy until James Alston (his son) comes of age"; the court appointed James Alston clerk. Philip Alston was elected to the senate again the following year.

The records reveal a dark side to Alston's character. Even before the Revolution, Philip Alston, styled "gunsmith," was accused of counterfeiting. In September 1777, Colonel Robert Rowan, a prominent patriot in Cumberland, wrote Governor Richard Caswell, criticizing Alston's political activities in the county and stating that "he seems to rule them all, and a greater tyrant is not upon the face of the earth according to his power" and that "about two or three years ago no gentleman with the least regard for his character would have kept this hectoring, domineering person company." In December 1785 testimony was presented to the assembly that Alston had murdered one Thomas Taylor. As Taylor had been a Tory and Alston was commanding a corps of militia in the service of the state at the time of Taylor's death, the committee of the assembly thought he should not be tried for murder. He was accordingly pardoned by Governor Richard Caswell.

In a few months there was further evidence of the colonel's violent nature. According to the court minutes of Moore County, on 20 Feb. 1786, "Philip Alston in a very abusive manner treated George Glascock, he the said Alston then sitting as Justice, on a bench." Glascock, a native of Virginia and first cousin to George Washington, had been appointed deputy clerk of court when Alston resigned. Deep-seated enmity developed between the two men. Glascock contested Alston's reelection to the senate in 1786 but lost. In May 1787 a number of citizens from Moore, probably led by Glascock, successfully petitioned the assembly to have Alston removed as justice of the peace; three months later Glascock was murdered. Evidence suggested that Alston ordered his slave Dave to commit the crime. Dave was seized, imprisoned, and released on bond; on 21 Aug. 1787, Alston forfeited a £250 bail when Dave failed to appear. That Alston himself was imprisoned for his part in the murder is attested by a note in the Fayetteville Gazette of 1 Dec. 1790; "Broke gaol on the 5th instant, Philip Alston, late of Moore County, committed as an accessory to the murder of George Glascock." In less than a year, Alston himself was dead; on 24 Nov. 1791 his son James qualified as administrator of his estate. Tradition says he fled to Tennessee and was there murdered by the runaway Dave.

Before leaving Halifax County, Philip Alston married Temperance, the second daughter of Drew Smith of the Scotland Neck section. In his will in 1762, Smith entailed a tract of land of four hundred acres on the Roanoke to his daughter Temperance. The Alstons sold this land in 1789, and James Alston, "eldest son and heir, joined to break the entail." James Alston married Mary Wilcox of Fayetteville and represented Chatham County in the legislature in 1800. Later he moved to Telfair County, Ga. According to family records, Philip Alston and his wife had three other sons and a daughter. John, the second son, who was mentioned in the will of his grandfather in Halifax county in 1778, moved to Fairfield County, S.C., where he left descendants. Philip, Jr., moved to Jackson, Tenn. There is no record of the fourth son, Drew. The only daughter, Mary Drew (b. 12 Jan. 1784), married in 1799 William Carroll. After he died without issue, she married William Harris and had with him three children, one of whom, Sarah, in 1832 married Albert Pickett, the historian of Alabama.

The Deeds and Wills of the County of Halifax (North Carolina State Archives, Raleigh).

Joseph A. Groves, The Alstons and Allstons of North and South Carolina (1901).

The State Records of North Carolina, Volume 17: Available from GoogleBooks