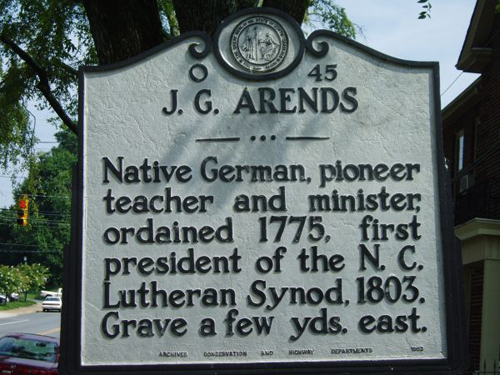 John Godfrey Arends, pioneer Lutheran minister, Revolutionary War patriot, and founding father and first president of the North Carolina Synod of the Lutheran Church, was born near Göttingen, Germany. Although little is known of Arends's personal history before he left Germany, upon his arrival in North Carolina, his life was recorded with dependable certainty. In 1772 the newly organized Lutheran congregations of North Carolina determined to send to Europe for a pastor and schoolmaster, as none could be obtained in America. The Lutheran delegation applied to the Consistory Council of Hanover. As Hanover at that time was an electorate of the Holy Roman Empire under the British ruling house, the delegation first sought the approval of the English throne. George III granted the delegation its petition for a schoolmaster, as well as a minister, and when Arends left for North Carolina, he took with him both his diploma from the Teachers' Seminary in Hanover and a personal recommendation and certification to teach from King George.

Arriving in 1773, Arends settled near Organ Church in Rowan County and began immediately to serve the congregation as schoolmaster. The Reverend Adolph Nussmann, who had accompanied him from Hanover, served as minister to the Organ Church for only one year before moving to Cabarrus, leaving his former congregation without a regular pastor. Realizing that it would be impossible to serve the needs of all the area Lutheran churches without another minister, the church turned to Arends, as he was the only other well-educated man in the vicinity. On 28 Aug. 1775, Arends was publicly examined and ordained into the ministry by the Reverend Joachim Buelow of South Carolina, and thus, Arends became the first man to be ordained a Lutheran minister in North Carolina.

For the next decade of his life, Arends served as itinerant minister in a vast area that today includes the counties of Rowan, Cabarrus, Iredell, Catawba, Lincoln, Davidson, Guilford, Stokes, and others. According to recent historian Carl Hammer, Jr., he "traveled long distances on horseback in all kinds of weather, over bad roads and forest paths, to spread the Gospel among people who had long been without pastoral care." Before his death in 1807, Arends had served nineteen churches in the area, helping to found most of them.

Even though Arends's congregations received financial assistance from territory under the rule of George III, and though Arends, as a minister, was often harassed, persecuted, and at times in danger of his life, he took up the cause of American independence, defying both British soldiers and American Tories.

In 1785, Arends moved to Lincoln County. In all, he either helped organize, or was the first regular minister of, nine churches in the Catawba Valley. These years were spent busily ministering to the needs of his many congregations. He traveled by horseback from one church to the next, often as far as fifty miles a day, preaching, baptizing, and confirming his parishioners. At the same time, he was also a gentleman planter.

In the years 1800–1801, there occurred a phenomenon that spurred Arends to perhaps his most notable historical accomplishment. In these years, the so-called Great Revival, which had begun in Kentucky, spread into the Carolinas, bringing with it a kind of religious hysteria involving "convulsions, prostrations, the involuntary gnashing of teeth, strange exercises," and the "jerks." As the official U.S. Lutheran history indicates, because of their concern over this "outburst of intensive religious activity" and the "alarming deterioration of both faith and morals" among the general populace, the Lutheran ministers of North Carolina saw "the need for some authoritative organization."

Hence, on 2 May 1803, Arends and three fellow ministers met at St. John's Church in Salisbury with fourteen lay delegates from various Lutheran congregations and organized the North Carolina Synod of the Lutheran Church. Arends was elected the first president. The North Carolina Synod was the third Lutheran synod to be founded in America, following those in Pennsylvania (1748) and New York (1786).

In 1776, Arends married pioneer Michael Rudisill's daughter, Hannah; they had eight children, the descendants of whom are prominent today in western North Carolina. The graves of the Reverend and Mrs. Arends were moved in 1920 to the cemetery adjoining the original Old White Church, which burned in 1893. To commemorate the two-hundredth anniversary of Arends's arrival in North Carolina from Germany, a special celebration was held at Organ Church near Salisbury in 1973, at which time a statue of the pioneer minister was unveiled.

Arends's last years were spent in blindness. He died in 1807 and was buried beneath the pulpit of the Old White Church in Lincolnton.