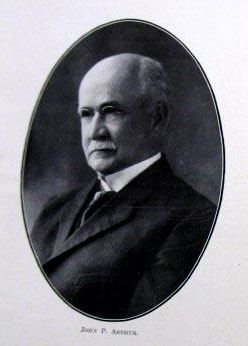 John Preston Arthur, teacher, lawyer, orator, and writer, was born in Columbia, S.C. His father was Edward John Arthur, newpaperman and cartoonist, whose home was the first in the town to be burned by Sherman's army. His mother was Martha Ann Henry; her father, Robert Henry, had been wounded at the age of fourteen in the Battle of Kings Mountain. Henry settled in Buncombe County and became the county's most outstanding citizen.

Arthur enrolled at the Virginia Military Institute in 1866 and was graduated in 1871. He studied at the University of South Carolina from December 1871 until May 1872, when he was granted an LL.B. degree. A few years later he was admitted to practice before the South Carolina Supreme Court, having already been admitted to the state bar.

Arthur taught school in Columbia from 1873 to 1875 and was adjutant of the Palmetto regiment in 1881. He worked in the office of attorney W. H. Phelp, in New York City from December 1881 to September 1884 and in that of attorney J. H. Hubbell from December 1884 to August 1887; he was admitted to the New York state bar in February 1885. He removed to Asheville in August 1887 and was made secretary of the Asheville Street Railway Co., later serving as superintendent and general manager until 1894. In that year he was admitted to the North Carolina state bar; he practiced in Asheville until 1898.

For several years after giving up law, Arthur seems to have drifted considerably, drinking heavily. Rather early in the 1900s he began work on his Western North Carolina: A History, 1730–1913, a 710-page volume on which he labored for about ten years. It was published in 1914. In 1912 he left Asheville for Boone, where he lived at the Blair Hotel for the remainder of his life. Soon after reaching Boone, he was engaged by twenty-two citizens of the community to write the History of Watauga County, North Carolina, published in 1915.

The revenue from his books was small, and by 1916 Arthur's financial situation had become acute. In one of his last letters he stated that he was digging potatoes and gathering apples at fifty cents a day and was looking for a job of any kind. He applied for a job at the local livery stable and was turned down. He died in utter poverty. Friends gave him a decent burial, and a marker was set up at his grave.

He was an Episcopalian and never married.