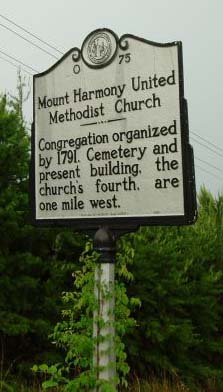 Daniel Asbury, pioneer Methodist preacher, was born in Fairfax County, Va., the son of Thomas and Pettie Jennings Asbury. At the age of sixteen he went to Kentucky, where he was captured by a band of Shawnee Indians while transporting provisions to a frontier army post. He was taken first to the West and then into Canada and finally became a prisoner of the British during the Revolutionary War. Upon release from a Detroit prison, he found his way back to his father's home in Virginia. There he was converted, entered the traveling ministry of the Methodist Episcopal Church in 1786, and was appointed to serve the Amelia Circuit in Virginia. The following year he was sent to North Carolina, where he served for most of the remaining years of his life. In Lincoln County he met and married Nancy L. Morris; they were the parents of eleven children: Franklin, Pettie (m. Robert Abernethy), Susanna L. (m. James Wilkerson), James Thomas, Henry, Lettie (m. William Cornelius), Daniel, Wesley, Hiram, William, and Fletcher.

Some years after his marriage, Asbury temporarily left the traveling ministry, although he continued to serve as a local preacher. Then in 1803 he returned to the itinerant ranks, and in 1806 was appointed presiding elder of the Swanino (Swannanoa) district. He served a total of fourteen years as a presiding elder. In 1808 he was elected one of eleven representatives of the South Carolina Conference (which included the western half of North Carolina) to the first delegated General Conference of the Methodist Episcopal Church.

Although Daniel Asbury was not related to Bishop Francis Asbury, they were close friends and colaborers, and the bishop visited Daniel's home on numerous occasions. Daniel was considered one of the most important of the early Methodist leaders in the state and personally established numerous preaching places and circuits.

When the annual conference met at Fayetteville in January 1825, Daniel Asbury sought and was granted the superannuate relation. He died at his home and was buried at Rehoboth Church, Catawba County.