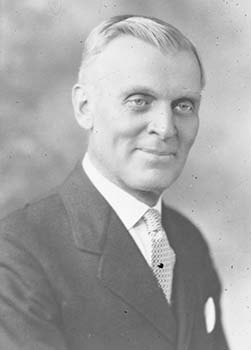 James Oscar Atkinson, editor and religious leader, was one of six sons born to George Washington and Mary Elizabeth Jones Atkinson in Wake County. He received the M.A. degree from Wake Forest College in 1890 and the same degree from Harvard College in 1893. Although he was reared a Baptist and attended a Baptist college, James O. Atkinson was troubled by the denomination's practice of closed communion. He joined the Christian church and preached his first sermon as a college student at Catawba Springs Christian Church.

When the Southern Convention of the Christian Church established Elon College in 1890, Atkinson was appointed the first professor of sociology and psychology. He earned a reputation as an excellent teacher and served Elon College in other ways: dean from 1903 to 1905, lecturer when he was no longer on the faculty, and a trustee from 1914 to 1940. He was also pastor of the Elon College Community Church from 1897 to 1917.

Atkinson served his church in several capacities. In 1900 the Southern Convention of the Christian Church appointed him editor of its official publication, the weekly Christian Sun, published in North Carolina since 1844, except for the period from 1863 to 1867. He served until 1916 and then was reappointed in 1924 to serve until 1936. From 1919 to 1940, Atkinson was mission secretary to the southern convention, in which position he continued to organize women to support missions. His great desire was to establish a college like Elon in China, but the convention's resources would permit support only of its existing missions in Puerto Rico and Japan. At one time, Atkinson was president of the board of control of the Franklinton Christian College for Negroes in North Carolina, and this contact afforded him numerous opportunities to speak in black churches. When the Seattle Council met in 1931 to plan the merger of the Christian and Congregational churches, Atkinson aided this union through work on the committee on union. Because of his commitment to the Christian church's goal of uniting all Christians, he was elected to the General Council of Congregational Christian Churches. Atkinson considered his service as trustee of The University of North Carolina, president of the North Carolina Press Association, and trustee of the North Carolina School for the Deaf as extensions of his church work.

Atkinson married one of his students, Emma Williamson of Driver, Va., who was graduated in 1895. Willis John Lee, a trustee of Elon, and his wife, Mary Jennet, had reared Emma on their Town Point estate on the James River near Suffolk. Emma and James Oscar had three daughters and one son. Atkinson died in Greensboro and was interred at Magnolia Cemetery at Elon College.