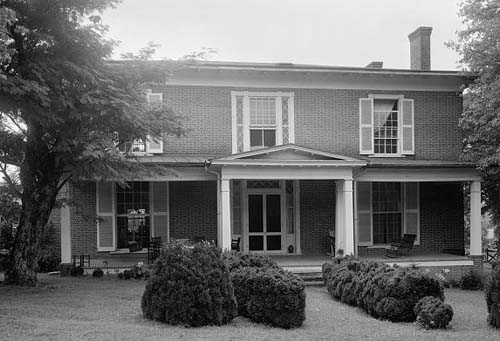 Isaac Thomas Avery, politician, planter, and banker, only son of Waightstill Avery and Leah Probart Avery, was born at Swan Ponds, Burke County. He had little formal education: he received an adequate education in the classics and some knowledge of science under Samuel Doak at Washington College near Jonesboro in Washington County, Tenn., but he left the college at the age of sixteen when his father, Waightstill Avery, became incapacitated. He returned home to shoulder the responsibilities for the family's prospering estate and slaves as well as to accompany his father as he continued the practice of law.

The young Avery showed an early interest in politics, representing Burke County in the legislature for the first time in 1809 at the age of twenty-four and returning to the lower house in 1810 and 1811. After that time he never again sought public office but continued to be a formidable figure in western North Carolina politics as an advisor to the governor, being three times appointed to the governor's council. In 1824 he was a presidential elector from North Carolina, at which time he initially supported Calhoun, who championed internal improvements. When Calhoun's star faded, however, he reluctantly supported Andrew Jackson over William H. Crawford. He was also a presidential elector for John Quincy Adams in 1828. In 1815 he married Harriet Eloise Erwin, daughter of William Willoughby and Matilda Sharpe Erwin, both members of prominent families. Mrs. Erwin was a daughter of William Sharpe, a Salisbury lawyer who served on the Holston River Treaty Commission with Waightstill Avery. Isaac Thomas and Harriet Erwin Avery had twelve sons and four daughters, six of whom died in infancy or childhood.

In 1829, Avery was appointed head of the Morganton branch of the North Carolina State Bank, a position he held for thirty years. At this time, gold mines at Brindletown in southern Burke County were producing profitably, and Avery was extremely optimistic about the future of this industry in western North Carolina. However, because of the lack of transportation, it was extremely difficult for any enterprise other than agriculture to prosper in Burke County. It was almost impossible to get the products out of the county.

Avery was a member of the board of internal improvements from 1821 to 1822 and was for many years president of the Catawba Navigation Company, which attempted to make this river navigable from its upper reaches to the South Carolina line. The project was unsuccessful, apparently because of inadequate capitalization, incompetent technical assistance, and the eventual development of the steam locomotive as a more efficient mode of transportation.

As the Avery family grew, the old brick house that Waightstill Avery had built became inadequate, and a new and larger house was erected in 1848. Isaac Avery of necessity administered large agricultural holdings, but he was considered a man of culture and learning and, like his father, primarily a classical scholar. He collected copies of the works of the Latin writers, as well as Shakespeare, and is reported to have read Latin easily even in his advanced years.

Four of his sons served in the Confederate army, three of them as colonels. Three were killed during the Civil War on the field of battle, and the fourth son died shortly afterward as a result of wounds received during the war.

Avery was buried in the family burial ground at Swan Ponds. A grandson said he seemed to give up his will to live when a servant returned with news of the death of his third son in battle.

My Mother was Lily Avery

My Mother was Lily Avery Davis born 1919 and was the Great Grand Daughter of Isaac Thomas Avery. I am looking for Information on her.

The Government & Heritage Library at the State Library of NC has genealogy collections that may help with family searches related to North Carolina (and surrounding states).  For research assistance, you may contact the library’s Genealogical Services. Here is the link to the Genealogy Services information page on the Government & Heritage Library's website -where you'll find contact information - http://statelibrary.ncdcr.gov/ghl/resources/genealogy.html.

You may also want to try your local public library.  Many public libraries subscribe to online databases that give access to genealogical data such as birth and death certificates, cemetery records, and census information as well as newspaper collections.