Frederic Fries Bahnson, engineer and manufacturer, was born in Salem, the son of Dr. Henry Theodore and Emma Fries Bahnson. He was educated at the Salem Boys' School and was graduated from The University of North Carolina in 1896. He began the study of medicine at the University of Pennsylvania but, because of poor eyesight, was forced to give it up after a year and a half. In accordance with both medical advice to work outdoors and his own natural inclination for engineering, in 1897 he began work as an engineer for Fries Manufacturing and Power Company. He later worked as an engineer for Stanley Electric Company in Pittsfield, Mass., and for the Florida East Coast Railway Company. He returned to Salem in 1905 and assisted his uncle, John W. Fries, in experiments on textile humidification. In 1915 he and his brother, Agnew Hunter Bahnson, acquired the rights to the Fries humidifier and formed the Normalair Company. The firm became the Bahnson Company in 1929, and in 1940 Frederic sold his interest in it to Agnew. 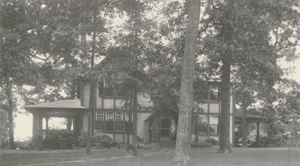 In 1929, Bahnson founded the Southern Steel Stamping Company to make furniture hardware. At the time of his death he was president of the company and consulting engineer for the Bahnson Company. During the course of his work, Bahnson acquired several patents in humidification and in furniture hardware design. His diversions included photography and work with precious metals.

On 14 Apr. 1910, Bahnson was married to Bleeker Reid of Charlotte; they were the parents of four children: Frederic, Jr., Reid, Henry, and Alex. Bahnson was buried in the Salem Moravian Cemetery.

Clippings up to 1975 at UNC Libraries:http://www.lib.unc.edu/ncc/ref/bio/bbio.html