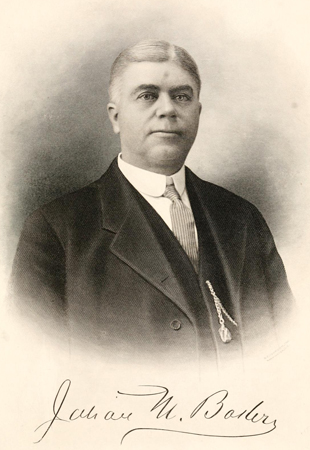 Julian Meredith Baker, physician and surgeon, was born in Tarboro of English and French Huguenot background. His father, Joseph Henry Baker, was also a physician in Tarboro; his mother, Susan Foxhall, was descended from the D'Ancie or Dancy family of Edgecombe County, who were established on a plantation well before 1765.

Baker received his elementary education at the Tarboro Male Academy and later attended the Horner and Graves School (formerly known as the Hillsboro Military Academy). After spending two years at the University of Illinois, Baker attended The University of North Carolina, from which he was graduated in 1877 with a B.S. degree. Though short in stature, Baker "was noted for his vigorous, active frame and he excelled in athletics, and gymnasium work particularly." He was captain of the baseball team and first president of the university's athletic association, as well as a member of the Phi Kappa Sigma fraternity. He spent a year at the Bellevue Hospital Medical College in New York and a similar term at the University of Maryland, from which he received his M.D. degree in 1879.

Baker then returned to Tarboro, where he opened general practice that soon became substantial. Beginning in 1906, he specialized in surgery and gynecology and established a reputation throughout the entire South. Through the years, he did postgraduate work at New York Polyclinic, the Chicago Medical School, and the Mayo Brothers' Clinic, among other places. Despite the demands of his practice, he wrote articles for numerous medical journals, which were noted for their careful research. He was awarded the Pittman prize by the Medical Society of North Carolina in 1887 for an essay on malarial haematuria.

In 1910, Baker retired from general practice and surgery and began to treat cancer patients with X-rays and radium; he was considered a pioneer in this field at the time. He was the organizer of the Pittman Sanitarium, which later became the Edgecombe General Hospital, the first in the county, of which he became chief of staff.

Baker was chairman of the county board of commissioners, was the first public health officer of the county, and was chairman of both the board of education and the local chapter of the Red Cross. He was also president of the state board of medical examiners, president of the state medical society, and a member of the American Medical Association. He was a Democrat, yet he was tolerant of those who entertained different views. He was a member of the Presbyterian church, past master of Concord Lodge 58 A.F. and A.M., and a thirty-second degree Mason.

The Baker residence, in which he maintained his office, was within the town of Tarboro. Baker was also a large landowner, raising cotton, peanuts, corn, and fine stock. One of his largest farms was Foxhall, part of the original grant from Earl Granville to the Dancys and said to have remained in the family for two hundred years.

Baker married Elizabeth Jiggitts Howard on 17 June 1884. She was born at Milton on 30 Aug. 1863 and was a daughter of George Howard, lawyer and judge of Tarboro, and Anna Stamp Howard. Elizabeth H. Baker was educated at Peace Institute in Raleigh and the Mary Baldwin College of Staunton, Va. The Bakers had three daughters, all of whom married: Anna H. Fenner and Sue Foxhall Green, both of Tarboro, and Elizabeth H. Sprague of Flushing, N.Y.

Transactions of the Medical Society of the State of North Carolina (1936).

The 1920s: Boom time in Tarboro, by Monika Flemings, The Daily Southerner: #

Makers of America; biographies of leading men of thought and action, the men who constitute the bone and sinew of American prosperity and life. Washington, D.C., B.F. Johnson. 1915. https://archive.org/details/makersofamericab02wash (accessed February 21, 2013).

History of the University of North Carolina: From 1868 to 1912 (Google eBook)

Makers of America; biographies of leading men of thought and action, the men who constitute the bone and sinew of American prosperity and life. Washington, D.C., B.F. Johnson. 1915. https://archive.org/details/makersofamericab02wash (accessed February 21, 2013).