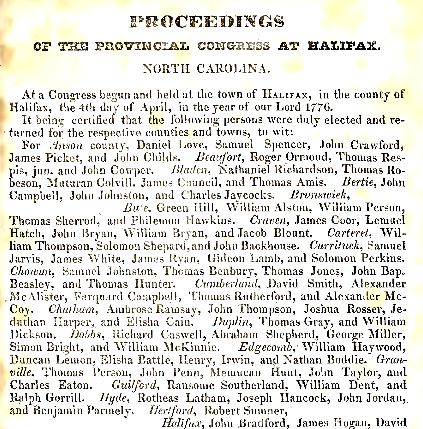 Elisha Battle, planter, revolutionary patriot, and state legislator, was born in Nansemond County, Va. He was the fifth child and third son of William and Sarah Hunter Battle. Earlier paternal and maternal ancestors had emigrated from Yorkshire, England, in the mid-seventeenth century, his grandfather, John Battle, settling on a two-hundred-acre estate on the west bank of Nansemond River in Nansemond County, Va. In 1663 this same John Battle obtained a royal patent for 640 acres of land on Pasquotank River in North Carolina. Here Elisha Battle's father, William, was born in 1682. In 1690, upon the death of his father, William returned to Nansemond County, where he continued to reside until his death in 1749.

By deed of record dated 17 Aug. 1747, Elisha Battle purchased four hundred acres on the north side of Tar River, in Edgecombe County, from Samuel Holliman. This purchase formed the nucleus of Cool Spring Plantation, near the present town limits of Rocky Mount, to which Battle moved with his family in late 1747 or early 1748. Subsequent purchases made Battle a large and prosperous landholder. He soon gained a reputation as a man of honest conviction, sound judgment, and considerable native ability.

According to an early biographer, Battle was appointed justice of the peace in about 1756, retaining this position until the infirmities of old age forced him to relinquish it in 1795. By 1759 he was serving as a justice for Edgecombe county court (later the inferior court of pleas and quarter sessions). He was one of five commissioners appointed in 1760 to "found and lay out" the town of Tarboro.

The same early biographer indicates that Battle was elected to represent Edgecombe in the colonial House of Commons as early as 1771, though his first recorded appearance there is during the assembly that convened in New Bern, 4–21 Dec. 1773. With the threat of impending warfare, Battle was named chairman of Edgecombe's committee of safety (1774–75). He also represented his county in the provincial congresses that met in Halifax in April 1776 and in November 1776.

With the establishment of an independent state government, Elisha Battle was elected to represent Edgecombe County in the state senate, 1777–81, 1783, and 1785–87. He served as chairman of the committee of the whole during much of the session of the constitutional convention, convened in Hillsborough in July 1788. With the majority of the delegates, Battle held that it would be too dangerous to adopt the proposed federal constitution without amendments to reserve and secure certain rights to the individual states. Accordingly, he voted to postpone adoption until such amendments were effected.

Battle united with the Falls of Tar River Baptist Church in 1764, attaining prominence in the affairs of his local congregation and the larger denomination. He served as a deacon and as a clerk at Falls of Tar River. He was also instrumental in the organization of the Kehukee Baptist Association in 1769, serving that body occasionally as moderator and as clerk. He was buried on the family plantation.

Lemuel Burkitt and Jesse Read, A Concise History of the Kehukee Baptist Association (1803).

The Battle book; a genealogy of the Battle family in America, with chapters illustrating certain phases of its history. By: H B Battle; Lois Yelverton; William James Battle, Montgomery, Ala., The Paragon Press, 1930: https://www.worldcat.org/title/battle-book-a-genealogy-of-the-battle-family-in-america-with-chapters-illustrating-certain-phases-of-its-history/oclc/2579075